Last night I breathed a sigh of relief as I packaged the 16th package, in the past week, to send out from my stores.  The last of the orders are done and ready to be sent off, and after sewing the last headcovering and creating one last St. Therese chaplet, I sewed the last of the Christmas presents for the extended family and avoided panicking when I couldn't find the little cars that I had to go into it (they ended up being in a bag in are car).  Here's how the final present, which is a holder for toy cars, turned out:

Then it was finally time, at 11pm to get back to working on present for our little family.  My goal is still three presents for each person by Christmas, and so far I've managed to not panic, which is saying something since the last orders took several more nights than I expected them too.

I've got two of Patrick's presents done, and one present for each of the girls.  One of Mae's presents combines an old blanket of hers (the Dora fabric) with new fabric to make a new blanket (shown below).  I'm also planning on using the leftovers pieces of fleece to make her a jacket, which will be part of an outfit (including a pouffy Dora dress) that's Mae's second present:

That leaves eight presents to be completed in the next six nights (really lets make that five nights because Christmas Eve will be wrapping and getting things ready).

However Paul's papers should be going in tonight, or some time tomorrow and then I will have help and hopefully be able to steal a little day time sewing to get things done... and to reclaim the shambles that has become my house before Christmas arrives (I've been in "maintain mode" during the last couple weeks as finals approached). 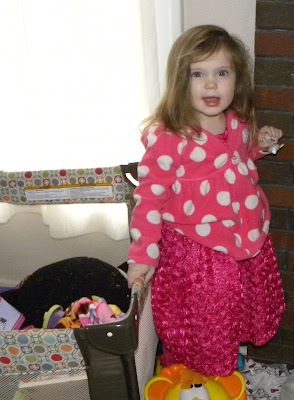 Next I have to decide when the tree goes up.  I've been leaning towards Christmas Eve for two reasons, neither of which, I have to admit, has anything to do with the fact that it's still Advent.  Reason #1, which regular blog readers may have already guessed starts with Mae and ends with Bae.

While I know Mae Bae would love a tree, I also know that Mae would love to climb a tree, and pull it, and step on it and destroy it... because that's just the kind of curious "what will happen if I do this!" two year old that she is right now.  I've resolved to pull out our little pre-lit tree from a couple years ago, that I found when we were moving, and put it up on the mantle.

But let's be honest.  Mae can climb the mantle.  She can scale five vertical feet of bricks like a baby spider.  So I'm putting of the virtually guaranteed destruction for as long as possible.

And reason #2?  Because the set up and then subsequent clean up from reason #1 would take time away from those presents I need to sew, paint, and build (yes, build... building a doll house is actually on the list this week...  I may be being a bit over ambitious...).

I've also given up on the idea of Christmas cards this year... this will be the first time since Paul and I got married that I'm not sending them out.  In the early years I was oh-so-organized.  I mailed them the day after Thanksgiving.  As the years have passed that date has been pushed back.  Last year I mailed them out before New Years.  This year... well... I also have two (maybe three) reasons for not doing cards.

The first excuse is that my address book apparently made it's way into the basement during the move... and I don't have the energy to go down and search through the boxes to see if it's in with my extra office supplies or if it somehow made it into the boxes and boxes of theology books from Paul's masters program.  The second reason is that we're currently incapable of getting a picture in which every member of the family is looking at the camera (or at the very least not having a tantrum of some sort).  The camera comes out and they start acting like little ruffians.  And the last reason, which I tell myself is the real reason, is that I had a baby six weeks ago, and therefore get to make any excuse I want!

Now to go save Paul from the wild and crazy babies, who seem to have amped up the wildness in anticipation of Christmas (actually they've been pretty good in some ways... Sadie cleaned the entire downstairs by herself yesterday, without being asked, and did an incredible job).  I hope you're all managing to survive the last week of Advent rush without too much stress!
Posted by Cammie Diane at 9:58 AM