I took heed of the ample good advice that I received after yesterday's post, and the subsequent conversation in the comment box, and returned it draft form.  The main reason was that I thought of my non-Catholic friends and family members out there who read this blog, and I didn't think it was a positive or accurate picture of Catholicism.  And leaving another inaccurate caricature of our what people imagine our faith to be like, is the last thing I want to do.

I'm not quite to the point where I'm blocking anyone yet, because I believe that the comments I received yesterday were meant to be helpful, even if they were quite convoluted and involved a twisting of my words and actions.  But I'm not going to publish any more comments on this topic from that particular source, because I do believe it could be a) a near occasion of sin for other readers and b) isn't reflective of the love or charitable kindness that I've found in the Church that leads us to strive to be better than we are.

And that's all I'm going to say about that!  Moving on...

An Actual Conversation that took place in our mini van:

Me:  "Look at that squirrel Paul!  I mean look at it!  It's huge!  I mean, it can hardly run.  Look!  No seriously look!  Did you see it?"
Paul:  "Honestly, I don't care about the squirrels.  They're evil, but really I don't care about how fat they are.  Why don't you go home and write a blog about it and then you can find someone who cares about squirrels." (Can you tell, this was during finals week?  Although his tone did have me laughing hysterically for about a minute...)

Eye roll.  It might be one of those conversations you had to be there for.  But...

I have never seen squirrels like the squirrels here in Michigan (and not just because one broke into our house three months ago).  They have definitely been putting on the pounds for winter.  I've seen two squirrels this week that were so fat they could hardly walk.  They waddled, slowly, down the sidewalk in front of me.

I have no idea how they're not getting picked off by predators.  Or maybe they are and there's just so many of them that it doesn't matter...

When we moved to Michigan we expected a long cold winter.  And while it's been fairly cold, and we've regularly had "high of 34 low of 24" days, it definitely hasn't been, "Oh my goodness, I can't survive here" cold.

I was pretty jealous when I heard that my friends and family in California got a foot of snow yesterday (actually, that reminds me, Maria took pictures of the town in California that I grew up in, while driving north on interstate 5, and posted them on her blog!  I haven't been back in around 4 years, so I really loved looking at them!).  So I was thrilled when I woke up to a winter wonderland.

Which is why I need to speed up my typing because Sadie is downstairs impatient to go out and play.

I do have to say that this snow is different than the snow back home.  When the snow back home would slide off the roof it would be in giant, dangerous, fast moving masses.  The snow that's been falling this morning is light and fluffy and actually blows upward in the wind.  I've never seen snow this fluffy!

Sadie has been waiting for this day all week... the 21st of December... and not because of the Mayan Calendar (Oh look!  We're all still here!).  Today she is officially 4 and a half, which she will tell you basically means that she is five.

I cannot believe that in six months my baby will be five!

I'm one of those parents.  You know the ones.  The ones that keep their sweet, innocent children on a leash when they're out walking... like a dog.

I believe that the people who make rude comments comparing your child to a dog in the grocery store and berating your parenting choices, have likely never had a runner.

You might recognize this term if you've ever had a runner.  It's the child that takes off at a sprint, giggling, knowing you're hot on their trail.  They're the child that doesn't even look back to be sure that you're chasing after them, and even if they did and saw that you hadn't noticed yet, they'd keep going because they're confident you'd figure it out eventually.

Mae Bae has been blessed with a double dose of toddler-ness, in that she's both a runner and a climber.

And the leash?  She actually loves it.  Because it means she can be two feet away from me and not holding my hand every second when we go on walks.  It also means that she's not locked down in a stroller. 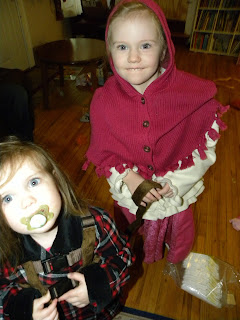 Yesterday we trekked across town to Target and I purchased a new camera.  It's been a long time coming as our camera has been dying a slow death, taking poorer and poorer quality pictures.  Thankfully I'd received a Target gift card and that, combined with the camera sale that they were having, bought me the camera I'd been hoping for.  Kind of.

We arrived and the sleek silver model was gone.  But they did have... hot pink.

I said I was okay with pink and ohhed and ahhed over how teeny tiny it is (it's so tiny it doesn't have a memory card, although it's internal memory is more than the memory card in my former cameras).  Paul paid the $8 for the insurance plan after watching how Mae started cooing and pointing and trying to grab the camera the second she saw it.

And now I don't have to worry about having horrible pictures for etsy, or having to redo photo shoots with the same snoods over and over again.  This should make running my businesses quite a bit easier! 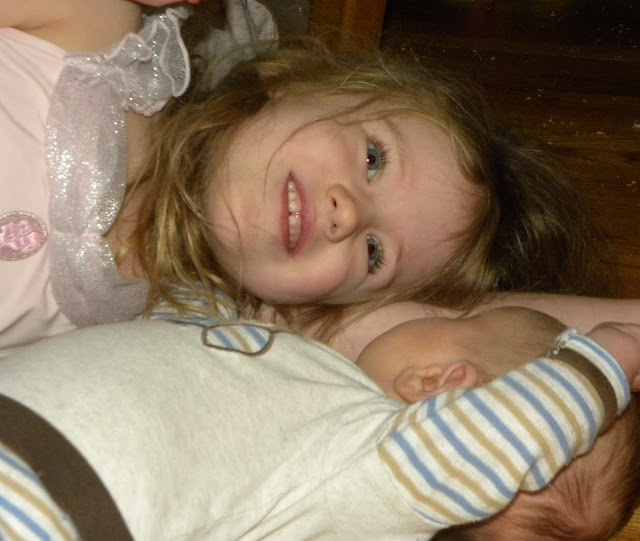 For more Quick Takes, visit Conversion Diary!
Posted by Cammie Diane at 10:06 AM