For someone who tries pretty hard to plan our activities around the liturgical year I fall into the "epic fail" category quite frequently.  Take this week for example.  I'd been excited about Saint Nicholas' feast day pretty much since I forgot it last year and scrambled at the last minute to throw something together.  And I thought about it creeping up on me all week... until the fifth... when I woke up and completely forgot that there was anything at all to remember until fairly late that night.

For some reason I thought that it had been announced last week, that in our diocese Sunday attendance fulfilled our obligation this year and while I'm not proud to admit it I was muscling my way through a really, really difficult Mass when I imagined the aforementioned announcement, in which two of my three children had decided that attending a High Mass was the optimal time to go bat-poo crazy and start acting like little savages.  And so when I heard the priest say something like: "because heaven forbid people have to go to two masses in a row" a part of me responded with a little cheer and "Score!  I won't have to wrangle these two little monsters into near silence two days in a row!"

You see, the girls have apparently spoiled me with their usually good behavior these past few months and I obviously don't handle the monster-ness as well as I imagined that I did when I wasn't staring it in the face.

Anyways, after spending the morning out and about in a snowstorm I returned home and saw that about 75% of my facebook friends had posted about how today was a holy day of obligation in their diocese.  And I felt oddly nervous and started googling.  I looked at the cathedral homepage and found nothing.  I looked at another parish in our area and again, no luck.  Finally I found a link to the cathedral bulletin and read that I was in fact, completely wrong.  Not only did the bulletin say that the day was a holy day of obligation, it specifically said that the vigil mass didn't fulfill the requirement.

And of course, the two masses of the day were well past at 8 am and 10 am.  And Paul was gone.  Did I forget to mention that?  Gone and cell phone-less since Mae swiped and hid his cell phone earlier in the week and while we know it's in the living room we just can't find it (I found a credit card she took out of his wallet the same day stuffed down the side crack of the couch during the search, however..).

After having a nervous breakdown on the blog's faebook page I made what could have very well been a less than stellar decision.  I'd already really wanted to go to confession before my I-missed-mass-on-a-holy-day-of-obligation realization.  But with finals week roughly 48 hours away, Paul had headed back to the library leaving me alone and car-less with all three kids.  So I decided to bundle the babies and walk the mile (give or take a bit) to the nearest parish.  I rolled the girls into their puffy snow suits and zipped Patrick into a outfit that makes him look a bit like a starfish.  Then I put Mae into her harness (yup, complete with a leash) and put Patrick into the Moby wrap and we headed out.

Or at least, we made it to the kitchen when I heard the door knob turn.  Paul had gotten my email and come home (his response to tell me he was coming home had never come through).  I was incredibly relieved.

Since everyone was already bundled up and the girls were looking forward to a snowy walk we decided to walk anyways, and headed outside to find that the snow had completely melted in the previous hour (Paul's comment that we were "a little over dressed" surprised me until I realized that the storm had passed).  We trudged to the nearest parish, waited in a very long confessional line, where I was very grateful that Paul was there to help me keep the girls in line (literally and figuratively) and then attended a beautiful advent mass.

The priest did announce that this particular mass met the obligations for both days, which led to a debate between Paul and I since I'd just finished reading Father Z's post on the subject (and made me wonder if that was the announcement that I half heard during the last mass that left me so confused).  Then we walked back in the dark (reason #1 that I was really, really glad that Paul was there... in my earlier email to him I'd asked him to please come pick us up after Mass if he didn't make it, because walking home in the dark on our own would have been pretty scary).

When we arrived home Mae Bae collapsed dramatically on the ground... as if we don't walk roughly the same distance on a daily basis: 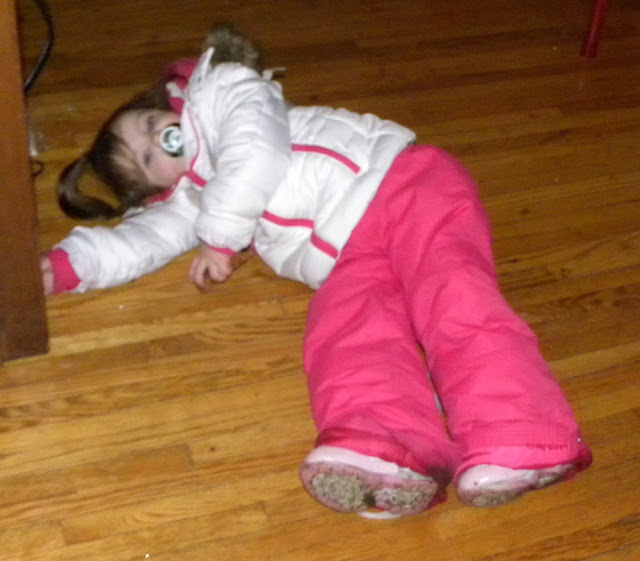 We managed our advent prayers and readings, ate leftovers and bundled the bunnies into bed since someone (pictured above in pink snow pants) had stood on a chest and turned off the heater before we left for Mass (I usually turn it way down... but not off!) and the house was slow in heating back up.

I was excited when Patrick woke up at 9:30 after sleeping through Mass and dinner and the beginning of my work time, but he refused to cooperate with the idea of being awake and holding a "look-he's-a-month-old-now" photo shoot.  However I did manage to snap this: 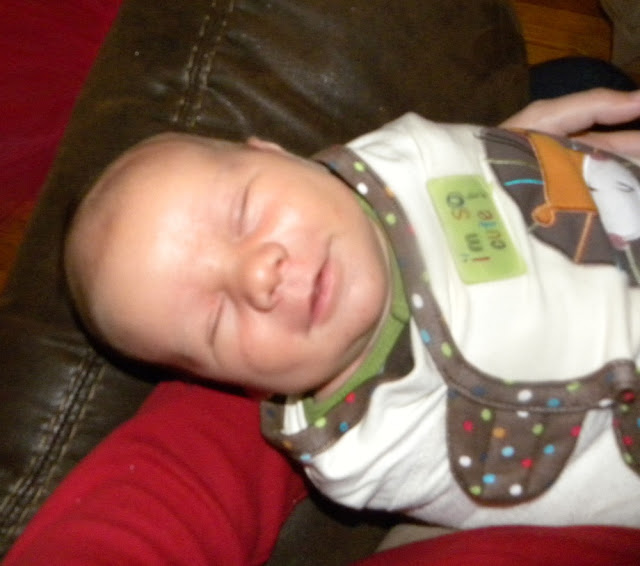 I have a feeling next year December 8th might stand out a bit more clearly in my head... or maybe not... somehow it's always the feast days that I'm absolutely sure I'll remember that I forget at the last moment.  Maybe my new advent resolution should be keeping my calendar up to date and actually checking in to see what it says!

I hope you all had a blessed feast day!  Now to get ready for Sadie's first ice skating recital!  I'm sure I'll have pictures to share later on (although I'm not sure how many considering her "routine" is roughly ten seconds long!).
Posted by Cammie Diane at 9:54 AM