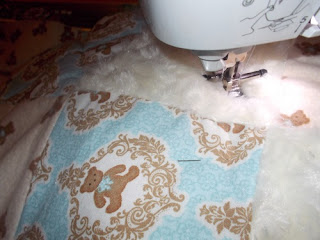 Here we go!  I'm in the home stretch!  The craft fair is tomorrow.  I've sewed well over 100 hours in the past 9 days.  My parents arrived yesterday and while I knew my mom had been working on blankets and amazing toy rolls (pictures to come once this is over!) I was so much more relaxed after seeing all the work she'd done as well, because my worries about not having enough to fill the booth, even if I finish every one of the 45 quilts I have quilted right now (I was binding all day for the past two days) are completely gone.

I'm still a little nervous, but I'm also excited.  I've never been to a craft fair with crowds estimated at around 60,000.  This is way bigger than any of the fairs I've been to or sold at in the past and I can't wait to see how it's going to go!

And I will definitely be posting pictures once I've survived this weekend!

When we arrived here last year I was amazed by the fact that there were no mosquitoes.  "Are there not mosquitoes in Michigan?" I'd find myself asking, amazed that we could eat in the shade in our backyard and not suffer a single bite.

This week the mosquitoes arrived.  Yesterday they were everywhere.  They chased us back inside after I took the girls outside to play while I did some hand sewing.

And now I can answer my own question... There are definitely mosquitoes in Michigan (and I need to buy bug spray before I sit outside for two days in a tent!)... Oh wishful thinking!

The other night, shortly after midnight, I heard a clicking sound coming from the kitchen.

On the nights that I work (so basically every night), Patrick goes down to sleep in his play pen in the kitchen and then I take him upstairs when I go to bed.

I went into the kitchen, and peeked into his crib.  I could see his little eyes wide open and the dim outline of his little hands clasping his favorite toy in all the world (move over Giraffe).  This: 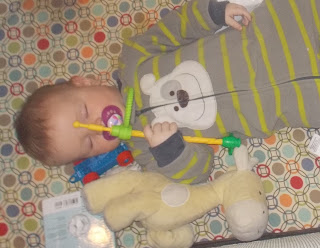 It's the flag pole from one of the girls little doll houses and while I haven't seen that doll house since we left Florida, Sadie found the pole and gave it to Patrick the other day and he thought it was the greatest thing ever.  It, along with Giraffe and a little Duplo car with red wheels make up three of his four favorite toys...

Wondering what toy #4 is?  Any bag of wipes that he can hold and crinkle while I'm standing next to his play pen sewing: 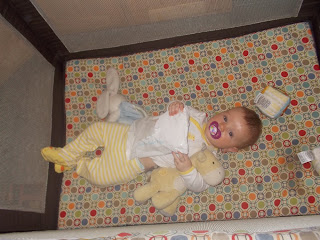 When I first started binding all of the quilts two days ago I broke out the Simplicity Bias Tape Machine I'd gotten for my birthday and set to work.

I suddenly understood why it got so many bad reviews.

It took ages to thread (like literally almost an hour) and by the time it started working I was starting to worry about how long this whole process was going to take.

After using it for three days I think there is a lot they can do to improve it (it shouldn't be getting stuck every 10 seconds with think cotton fabric so that I constantly have to tug the fabric through)... and after making 180 yards of binding in the past three days it does appear to be beginning to have some problems pulling the fabric through at all (I have to tug it through more and more frequently)... however...

It has made binding the quilts much, much faster than it would have been if I'd done the binding by hand.  And the bindings are absolutely beautiful and uniform.  So the machine has definitely moved up in my estimation and while it was frustrating to get started I would definitely recommend it for anyone making tons of binding/ bias tape.

Patrick has mastered the developmental milestone of screaming at the top of his lungs if it looks like one of his sisters is going to even touch a toy that he's playing with.

I don't remember either of the girls being all the interested in toys when they were this age... but Patrick is and heaven help anyone that tries to show him how a toy works.  Because he's pretty sure he doesn't need help: 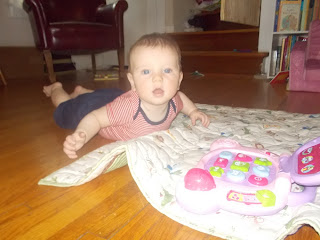 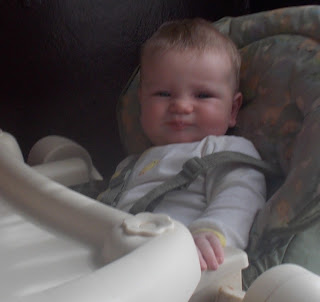 I remember Sadie desperately trying to grab food and shove it into her teeny tiny mouth when she was three and a half months old.  She's starving I thought (I think it was really the pain of undiagnosed reflux now... since I didn't know that all babies didn't spit up every single time they ate and her doctor acted like it was totally normal too...).  So we started her on rice cereal, per his advice at four months.

With Mae I made it to a week shy of six months, when, after a month of her trying to swipe food off of the table, I broke down and made rice cereal.

Patrick is a bird of a different feather.  I made him mashed sweet potatoes.  He tasted them and clamped his little jaw shut.  Cheerios?  No way.  Tiny soft pieces of sweet potatoes?  He wouldn't even glance at them.  He has no interest in anything I put on his tray.  He is so different from his big sisters.

He seems perfectly happy holding off on food a bit longer and I'm perfectly happy to let him.  On the other hand, if I'd had a Patrick first, I probably never would have understood why everyone doesn't wait until (fill in the blank with a varying number of months) to start solids. 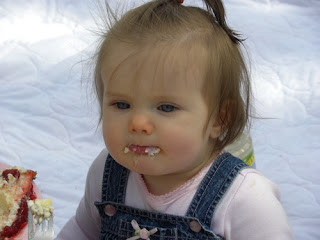 Over the years I heard plenty of "well I exclusively breast fed until twelve months" and I would feel like a failure, because I couldn't even imagine that being possible when our girls were ravenous eaters desperate for food at 6 months (when they both weighed around 20 lbs).  Was it they were so big?  I would find myself wondering.

These days I find myself increasingly more laid back.  Would I give any of my babies rice cereal at 4 months?  Nope.  I'd be trying to figure out why there little tummy was so upset and searching for answers after what happened with Sadie.

But I also wouldn't beat myself up about giving them food a week before their six month birthday, because that was the date I put on the calendar.  Instincts win out over random advice these days.

In other nursing news I realized that I just hit the 48 months mark in combined nursing time.  21 months with each of the girls and six months now with Patrick.  Four years of nursing tops!  How the time has flown by!

For more Quick Takes, visit Conversion Diary!
Posted by Cammie Diane at 7:56 AM