What I Wore Sunday: Everything That Happened on Mother's Day Edition

Things are a bit chaotic at the moment around here.  In the past days I've spent over 50 hours sewing.  And then last night it became clear that my sewing machine desperately needed oil, during it's second cleaning of the week, and after ransacking the house there was no sewing machine oil to be found.  So I'm not impatiently awaiting the opening of the sewing store to go get a small bottle of oil and I'm praying that that stops the squeaking/ripping the bobbin case out of place problem that's been going on (I suspect it will fix it).  It did mean an "early" night last night at 11, cutting my sewing short by at least an hour.

Yesterday morning Sadie proudly brought me the Mother's Day gift that she'd picked out all by herself. I'll admit I was a little nervous about it because in the previous days her lack of self control in keeping her exciting I-picked-out-a-present-for-Momma secret had resulted in her telling me she'd gotten me "a black shirt" and then assuring me that I shouldn't worry because she'd made sure there were "slashes" for Patrick to nurse out of.  Since they bought it from a store without a nursing section I wasn't quite sure what "slashes" meant.

So she excitedly told me she couldn't wait for me to wear my new shirt to Mass and then handed over a incredibly sheer bathing suit cover up that was cut down to below my rib cage for nursing ease, and arm holes that were apparently designed to show off ones bathing suit from all angles.  Oh and then she requested I just wear it by itself, I guess so that it could shine in all it's super awesomeness.

I gave her a huge laughing hug and said yes I'd wear it to Mass, and no, not by itself and set to work making it... appropriate.  First I paired it with my white and black polka dotted dress (made by me).  With my still very much recovering baby/I've-had-3-c-section muscles I felt like it made me look kind of pregnant (which I'm not) so I kept on layering and added my turquoise sweater (Sadie protested).  And then, because it the sort of day where snow flakes/ice fall from the sky periodically because apparently no one told Michigan that it's May and that some people are planting flowers (although not me yet because I've been too busy sewing, thank goodness!) I threw on my favorite look-it's-spring! jacket.  Here's the final outfit: 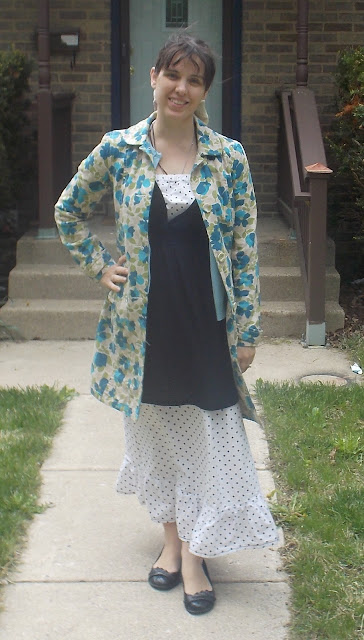 And then I added a baby in just in case I wasn't disheveled enough on my own... but at least the baby wasn't wearing a diaper on her head (which is apparently the new look in our little house in toddler fashion): 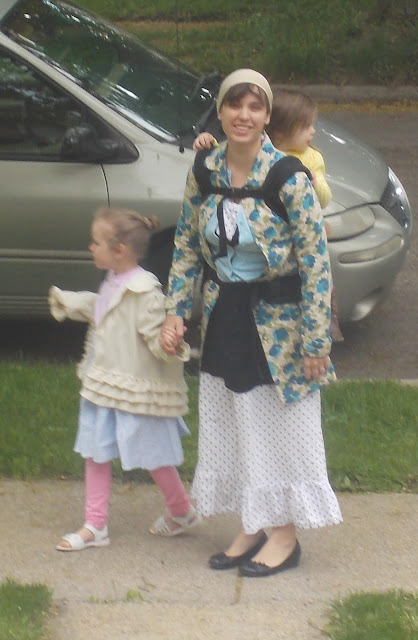 Admission:  We left Mass after communion yesterday.  We were 75 minutes into Mass, which meant I was 90 minutes, plus walk to Church into carrying a squirming 36 lb Mae, who was wondering why we'd been at Church for an hour and a half and I was about to die.  And Patrick was ready to nurse and be changed.  And our kids apparently have an hour and a half in Mass time limit and the clock had run out.

Right now I'm also trying really hard not to write a post about a certain homily I heard which included the words "Jesus was not a good guy" (that would be a direct quote) but at least the conversation that followed on the way home kept my mind off the fact that I was carrying a cuddling Mae Bae through Artic winds.  But still... what?!?!?!

A while later Paul treated us to lunch where an interesting scene unfolded.  At the table next to ours a large, loud woman began berating the waiter.  She couldn't believe how rude he'd been.  He'd said "Hi, welcome to Chili's!" and then stood in shock as she jumped down his throat for not wishing her a Happy Mother's Day and began to yell at him and demand to see his manager.  The waiter continued to be amazingly polite in the face of the temper tantrum that I can't imagine allowing Mae Bae to have in public, and went and got his manager, who apologized profusely.  "I can't believe this!"  She continued.  "It's Mother's Day and here I am with my family and he doesn't even wish me a Happy Mother's Day."

It was so over the top that I wondered momentarily if we were on that "What Would You Do?" show.

The manager ended up giving them free stuff, and suddenly she was smiling and sweet and the stench of a scam began to drift over.  I was just amazed (and the woman then tried to engage us in conversation, because apparently my I-can't-believe-you-just-did-that face was showing as I instructed our girls on always being polite and kind to waiters and she now wanted to prove to us that she really was sweet and nice or something like that.). I will say that I was especially amazed at how politely the waiter handled the family for the entire hour following her outburst.

In other Mother's Day news, Patrick can now push himself up on his hands and knees and rock back and forth in an attempt to propel himself into a crawl.  His knees had kept slipping backwards after he'd get up (as they were in the picture below) but yesterday he actually stayed up and moved his little back leg forward before toppling over.

He's so determined to crawl that he wants to be down all the time and hardly tolerates being held when he's not eating.  He has places to try to go and people to try to get away from (like a particular sister who may or may not think he resembles a small pony).

For more WIWS head over to FLAP for the link up!
Posted by Cammie Diane at 7:12 AM