About an hour ago I lay in bed trying to get Patrick to finally go to sleep while having thoughts like "Kid! Do you know what time it is?  It's like eleven o'clock eastern time and since we were up awake at seven o'clock eastern time (aka four a.m. here in California) you should definitely be asleep!!!" when a 5.7 earthquake hit and we definitely felt it (this was last night now, since I fell asleep before I could come up with the last two quick takes...).

As a kid who spent the first seven years of my life in Humboldt County, earthquakes have never been quite as frightening to me as they perhaps should be.  One of my earliest memories is of an earthquake when I was three or four, when the ground seemed like it was rolling under our feet for what felt like a very long time and mom picked me up and raced outside.  This earthquake didn't have much in common with that earthquake (at least not in our current geographic location).  When it first happened I thought "earthquake!" and then "wait, is that the hotel elevator malfunctioning?" since the thing is right next to our room...

That brings me to Take #2, one of the scariest elevators of all time, which happens to be in our hotel.  You know how when elevators hit something they hopefully will open back up?

The one in the building we're in right now doesn't.  It closes rapidly and I watched as it hit a walker and kept on trying to close.  It took two men to pry it back open to let the walker go through.

I think I'll be taking the stairs tomorrow rather than braving it with babies in tow.  We're just not that fast.

I have to say, I'm a little bit in love with the Detroit Airport.  It actually has a play area.  Let me tell you, that made my Tuesday so much better than it would have otherwise been.  Case in point: 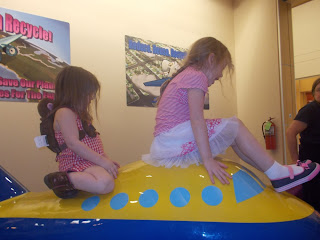 I could go on and on about what a great idea this is, but since these are supposed to be quick takes I'll just say that more pictures are definitely coming. Maggie decided, upon Nani and Grumpa's arrival in Michigan, that she would start talking.  She hasn't stopped since.  Her favorite phrase however is short and... well... I'm not sure I'd call it "sweet."

If the boots aren't immediately put back on her feet tears start in approximately 4.3 seconds.

And yes, she does sleep in them at times... like on those nights when whoever's putting her to bed decides to pick their battles and that sleeping in a sleeper and cowboy boots isn't one of those battles worth winning...

I had big plans to photograph my quilts before we left for California...

If you don't want to read something pretty gross, stop right now and go down to take #6. 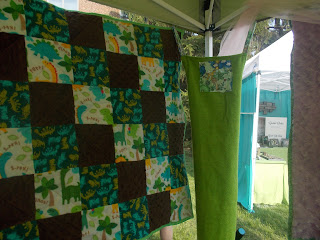 I was folding laundry, getting ready to pack our bags on Monday afternoon, and thinking of all the many things I needed to get done before we left when I looked down and suddenly realized I was standing in water.  That's strange, I thought.  The water had spread like a sheet over much of the laundry room floor.

And then I realized what it was.  It wasn't just "water."  It was raw sewage.

Thankfully my quilts were not in that room and and were in another room carefully wrapped in plastic.

And now Paul is dealing with the aftermath (apparently it was tree roots) and the clean up that needs to happen because the flooding got into places I just won't be able to get to (like the wooden pallets under the washing machine and dryer) and it's going to need a professional touch.

And that is why I'll be photographing and posting when I get back to Michigan in a couple of weeks... because there just weren't enough hours in the day my last day there!

When I packed for California I was expecting triple digit heat, or at least highs each day in the nineties. I'd already heard for weeks about how warm it had been and it didn't even cross my mind to pack winter clothes.

And then we arrived.  And they have a frost warning.  And it is cold.

I've been shivering and finding old sweatshirts and huddling under blankets.

Where is my summer California?

This made me laugh so hard tears came to my eyes...   I can't wait to see more!

For more Quick Takes, visit Conversion Diary!
Posted by Cammie Diane at 9:00 AM