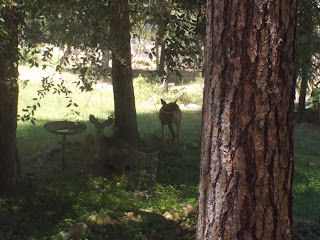 I've spent the morning discussing bones and spine and stomachs with Sadie.  She'd been asking lots of questions about bones lately, and then found a deer vertebrae outside, which led to a discussion about nerves and how we feel things and her repeatedly showing Patrick the vertebrae, although I'm drawing the line at her attempting to give it to him to play with.

Oh and there was this conversation that inspired the discussion on spines:

Then I brought up the index for Grey's Anatomy (the book, not the show) and we looked at pictures of muscles and bones and stomachs until she was ready to go back to playing.

Later on I heard her say to Nani:
"Do you think Puddy got him."  Followed by:  "Maybe it was a bear."

Or a mountain lion.  With the cuts we've seen on the horses recently (like two days ago) my money is on the lion.

In the past two weeks I'm 0 for 2 in the remembering department.  And then I see a friend mentioning meatless Friday and it's always two seconds (slight exaggeration) after eating the hearty breakfast that Grumpa made (can I blame not knowing what day it is on "traveling"?) and now I'm going to have to come up with a new Friday penance and not forget that it's Friday again before bedtime, which means I need to do it quick.  Because forgetting that it's Friday is likely to happen in 3... 2... 1... 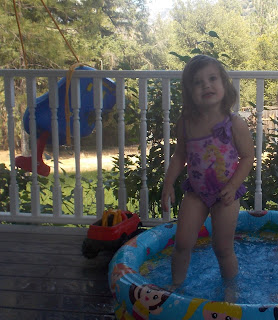 Maggie's talking more and more, to which I say:  Finally.

Because talking means that there are days without tantrums now, in between the days when we cry for 3 hours because a button doesn't look right, or is buttoned crooked or has come undone because she pulled at it for fifteen minutes to have something to cry about (or because Mama said "Fine.  Give me that cardigan.  If it's going to make you cry all day it's going into the laundry room and the door is going to be shut.").

But tantrum days are becoming fewer and further as she greets me in the morning with statements like:  "Ya.  I want blueberries." 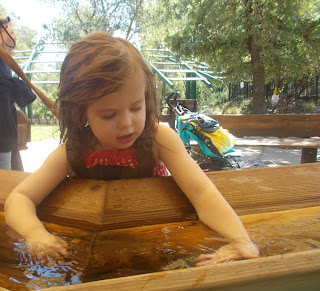 And #3 is an especially good thing because I don't feel like I'm going to get nearly as much mileage out of saying "she's three" with wide eyes, as I did when I say "she's two" when she's melting down about the cardigan, or her boots, in a public place.

Two year olds have such a reputation that those words garner instant understanding by many.  But three?

It's time to straighten out kid.  (Why yes, I am living in a dream world at the moment... It might be the result of yesterday being a "let's see if I can climb the china hutch" sort of day...) 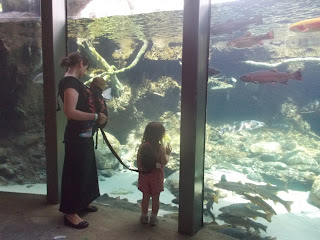 I will use a tale of our time at Turtle Bay, earlier this week, as a sign of progress however.  You see, we got to the giant fish tank and Mae watched the fish for ten minutes and then I looked down and saw that she had dropped to the ground and was taking her shoes off.

I know what this means.  Mae lives to have her shoes glued to her feet.  But if she sees a swimming pool she's sitting down and yanking her boots of her feet and throwing them to the side as if she hopes never to see them again.

I looked at her and said:  "No, we're not going swimming" and waited for the water works.  Instead she paused, looked around, and put her shoes back on.

And I nearly fell over from surprise.

Today I should finish the very last of the orders that I didn't finish before I left California.  I will breath a sigh of relief.  And then I will begin sewing new dresses for Sadie, who has finally gotten too tall for her 6x dresses, and jumpers for Maggie, which I hope will discourage her from stripping down and running around while her sister says things like: "She's naked as a jay bird!"

I scanned the ironing board last night and wondered if it was weird that I travel with at least ten yards of fabric, while I'm supposedly taking a vacation from sewing for the first time in I-don't-know-how-long. 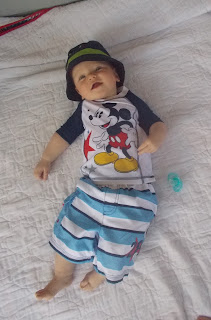 Patrick has reached the distractible baby age where apparently I'm not allowed to read while he's nursing.

Last night I was trying to get him to nurse to sleep, because apparently without his beloved playpen in the kitchen with the sound of the dishwasher and oven fan, he just can't sleep.  In Michigan he generally goes down easily, often on his own, and sleeps for 4-8 hours at a time.  Since we've been in California I'm lucky if he sleeps for half an hour at a time...he's looking for excuses to wake up... and he's not about to go to sleep on his own.

So I settled down with a book I found when we arrived here (since I realized upon arriving that I'd left my planned reading/reviewing material in Michigan) and began to read Catherine of Siena by Sigrid Undset, which I apparently left during our last visit last summer, but which I'm finding, now that I'm 90 pages in, is much harder to put down.  And Patrick, whose eyes were closed, heard the quiet turning of the page and whipped his little head around and hit the book with his hand.  After repeating this several times I finally mastered the art of silently turning the page (or he was finally deeply sleeping so he didn't wake).  But yeah.  New baby milestone.  Not wanting mommy to read while nursing!  It happens every time, although it's one baby milestone I wouldn't mind skipping!