What I Wore Sunday: In Which My Children Go Wild...

If I were to give the kids grades for Mass today it would look something like this:

And if I gave grades for "getting ready for Mass" behavior it would look like this:

We ended up looking like the pictures down below... which means not entirely disheveled.  But still.. getting to that point...  At one time in the morning Mae had something in her hair until she ripped it out and throughly mussed her hair lest something think she was a well behaved little girl.  She also had to change cardigans because I mistakenly put her in the very cute one that only has three buttons (it was made that way) and those three buttons not being five or six, led to a hour long tantrum of uncontrolled non-stop screaming because HOW ON EARTH CAN A CARDIGAN ONLY HAVE THREE BUTTONS (that would be toddler logic, in case you were wondering...).

However, despite the behavior scores, if I was fair and divided the Mass into parts, they would go something like this:

In between part 1 and part 2, as you might imagine, Sadie and I went into the hallway and had a little talk about how we're at Mass to love Jesus, alongside all the angels and the saints.  There may have been a question posed about what the angels were thinking when they saw her purposefully slam the kneeler down on the top of my foot after being asked to leave it alone twice (hence the D-... wow those things are heavy...  I think the "my foot" part was an accident, but the slamming was not).  That question, asked in a surprisingly calm tone, may have been followed by hysterical tears and tissues and A-rated behavior for the rest of the hour.

Well... she turned it around...  Mostly.  I spent a good part of the portion of time before the start of Mass and before the readings (before the kneeler incident) outside with Mae.  She was fine until the priest came in to make a few announcements before things got started and then she started hysterically screaming.  I immediately carried her out.  It took about four times of going outside (because we were even too loud for the hallway behind the glass doors) before she settled down and we could go back in again.  We stood facing a very boring grey wall, while I insisted that things weren't going to get any more exciting than this, because being outside wasn't a good thing.  She only got a B for once we went back in because about every five minutes she would say:  "baby" or "binkie" in a little, soft toddler sing song voice, which apparently caused the woman two rows in front of me great distress since she had to give me the stink eye three times for softly spoken phrases with five to ten minutes between them, including a look in the communion line.  She's lucky I don't give out grown up scores.

I can't blame Patrick for his grades since he's teeny and prefers to be in a carrier and today Daddy decided to brave holding him, which it turns out, wasn't the best plan.  The thing is, when Patrick is held he thinks he should be allowed down on the floor to work on his crawling.  Since this isn't possible during Mass he goes into back arching, throw himself onto the ground mode, which, if nothing else, is at least mostly silent.  After a brief while of Patrick making cute baby faces at the two ushers, and spotting me and Mae about 20 feet away outside the glass doors (I was surprised he could see that far and clearly recognize us),  Paul ended up standing at the back with him for most of Mass.  He got an A- for the second half only because he finally fell asleep.  The minus is because it certainly wasn't soon enough...

Now on to the clothes part of WIWS.

I made the dress and paired it with my trusty belt along with my go to black sweater.  I was desperate for any snood to put my hair up in today and was pleasantly surprised when I found one that actually matched. And the flats (yay for no more boots!) are from the Walmart in Butte, Montana.

Sadie is wearing a dress from Costco in California, and she fretted over it once she found a tiny tear in one of the tiers mid way through Mass.

Mae is wearing an adorable dress my Aunt and Uncle gave her, a sweater from our favorite thrift store and hand me down tights from her big sister... and of course her cowboy boots.  The frown is courtesy of this mornings cardigan battle (after the buttons I wouldn't let her wear three cardigans together, stacked, which made me triply mean). 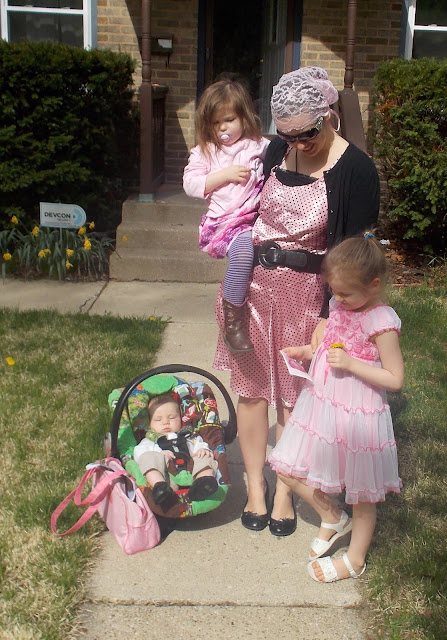 Sadie's expression in this picture kind of sums up parts of the morning:

And there was Patrick.  He's in one of my favorite thrift store outfits.  He's managed to kick of his shoe in the 10 seconds after I set him down, but before I snapped a picture: 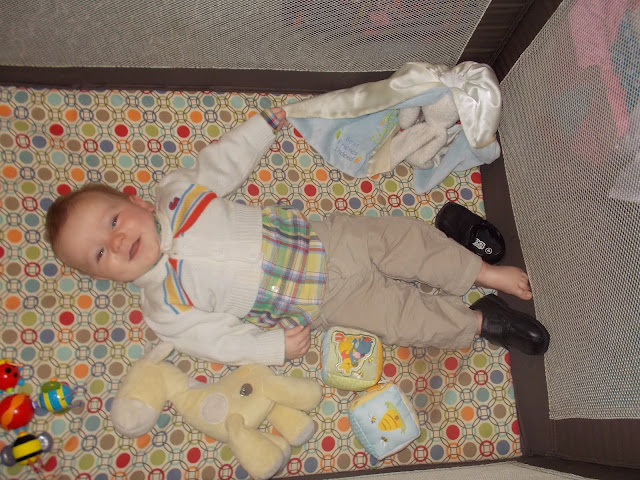 And that is our version of WIWS. For more outfits or to join in the What I Wore Sunday fun, click here!
Posted by Cammie Diane at 2:04 PM