Patrick would like you all to know that I am the most cruel mother on the planet and that it is just not fair.

Ready for the reason? 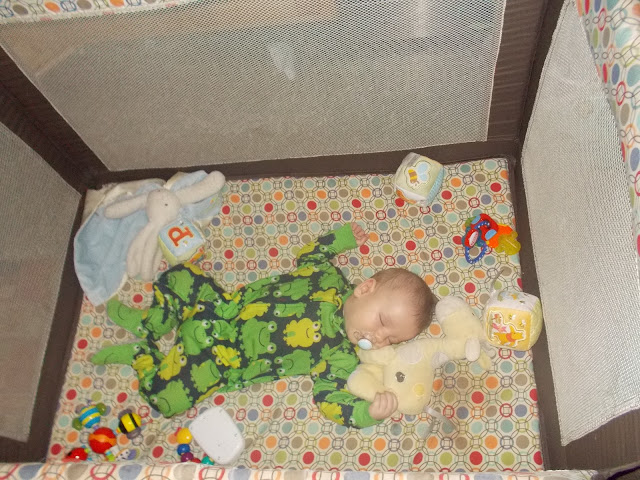 Can't you tell that that playpen is really some sort of baby torture device in a colorful disguise?  Because he certainly thinks that it is.

There were hysterics when the bassinet went down to the basement.  But seriously, kid?  It was way too small.  Case in point: 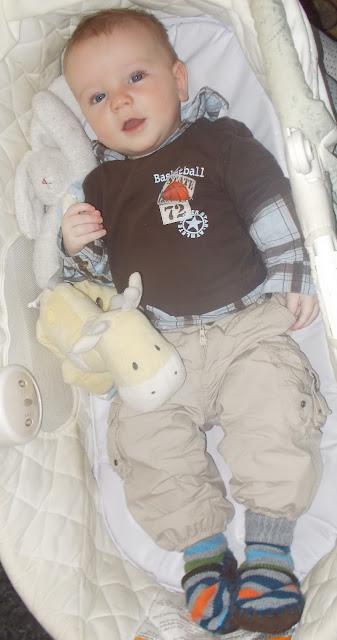 Yet he loved being squished up in his little comfy first bed, and so he's not thrilled about the playpen moving into the kitchen, which is where he goes when I need to be sure his sister isn't trying to ride him or pick him up and carry him while I'm making lunch or dinner or sprinting down or upstairs to use the facilities (the worst thing about this house... little kids and no bathroom on the main floor is not a great combo...).

Sadie cleaned the downstairs for me last night.  She picked up every single toy and piece of clothing (because these kids scatter clothing about like they scatter toys) and put them all away.  Then she straightened the door mat and told me that she'd done it all as a present for God.

Then her sister went over and picked up the doormat and dumped it in a heap and they became locked in battle with Sadie repeatedly straightening it and Mae repeatedly making it crooked just because she could tell it bugged her sister, while I told Sadie that she really didn't need to worry about the mat being a tiny bit off center.

When they finally went up to bed Sadie said:  "Thank you for the kiss Mommy, now I want to make my bed!"  Um... okay.  I walked downstairs.  There was giggling.  "Mommy, I found Holy Baby!"  and then "Mommy, Mommy, come up here!  You have to see this!  I found Mrs. Bunny!"

This is what I saw on my second trip upstairs to see what all the fun and giggles were about: 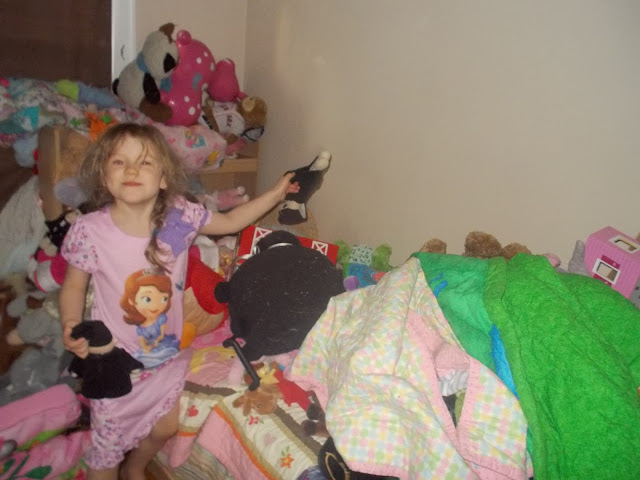 An hour later they were both on Mae's bed and an hour after that the toys were on the floor (mostly) and Sadie was back in her own bed.  Which brings me to Mae's bed time pajama argument:

You know how Sadie became obsessed with only wearing dresses when she was two and a half, and she would scream and cry and become hysterical at the suggestion of anything else.

Well Mae's the same way about a different article of clothing... Sleepers.

Yes, those thick, hot, fleece footed sleepers.  Up until now that's been okay.  Then Michigan decided to go from 20 to 70 last week and we had a problem.  You see our house isn't air conditioned.  We have this: 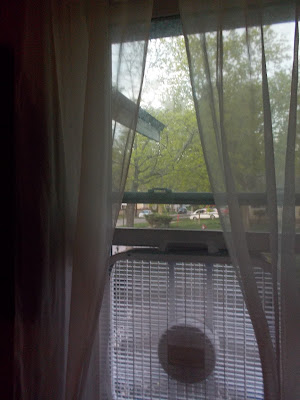 But by nighttime it's pretty hot.  I might keep it around 76 on a day like yesterday (70s and 80s) if I play my cards right and open the windows first thing in the morning and get the house really cool.

If I have to turn the oven on, or even use a burner, add five to twenty degrees to the temperature inside and the inside becomes hotter than the outside of the house.  A brick house plus a gas stove is awesome in winter.  Not so awesome in summer when it becomes a brick oven.

Anyways, last night it was hot.  At least, hot for those of us who just had six months of 20 degree weather.  And I told Mae she could not wear the sleeper and made her put on a short sleeve top and shorts.  She demanded to wear boots with them to bed and I thought, there's a compromise I can make. Then she went upstairs and found a long sleeved hooded sweater and we suddenly had this:

She even found a down comforter to go with it and was incredibly sweaty when I checked on her, but apparently okay with that (and on several trips upstairs she had the hood up too):

We've also argued the appropriateness of footed sleepers out in public, even if we pair them those cowboy boots and a cardigan (her favorite accessories for a footed sleeper).

I just realized that today is May 3rd and that that is the anniversary of my headcovering shop, A Snood for All Seasons!  It's the two year anniversary, to be exact.  According to the little sales counter that's roughly 518 headcoverings over the past two years, which isn't bad at all since for the first six months or so I was pretty excited if I got a single sale each week!

I am hoping to take a little vacation (I'll post more info here and on my shop page next week) for the first time in about a year... but because I'm always sewing when I'm traveling I'm also hoping to have a bunch of new snoods to add to the shop when I get back (I'm not the best vacation taker...). 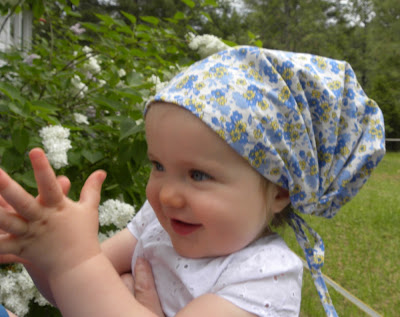 I had a mini tantrum last night when Paul, who is taking summer courses, including a child-centered law course that makes me feel a little more relaxed when I keep seeing homeschooling legal horror stories, announced that his classes this summer are at night and that during the week I'll be handling the joys of dinner and bedtime on my own.  Let's just say that my reaction was not pretty.

Sigh.  I guess lunch will now be the main family meal of the day... Can you tell that being flexible about this sort of thing has never been a particular strong point of mine?

Maybe I can excuse my not-coping-with-this-all-that-well-last-night by saying that it's finals week (part 1... part 2 is next week) and Sadie had a fever of 102, I had a fever of 101 and Mae had a fever of which we don't know the temp because let's face it, it's impossible to catch her with a thermometer and we've all been locked in the house by ourselves trying not to spread the sickness around but being kind of miserable.  Yeah, that's why I was so upset about it... right...

The trees are finally giving up their skeleton-ish appearance and growing leaves. 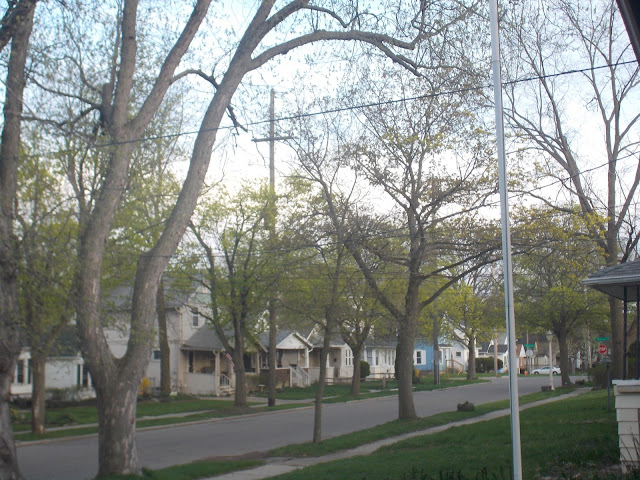 Patrick has been our babbling baby lately.  And he seems to be getting pretty good at copying sounds.  Paul told me he had been saying "Dada" and I rolled my eyes and was like "yeah right, I'm sure" until I was sitting on the couch and Paul picked him up to change his diaper and he said:  "Hi Dada!  Hi Dada!" in this perfectly clear little voice.

Does he know what he's saying or is he just mimicking his sisters?  I have no idea.  But it's pretty cute.

Another sound he's learned may have been taught by big sister Mae.  When I served sweet potatoes with dinner the other day Mae responded by saying:  "Bad Ma! Bad Ma!  I want OatBear!" which means Oatmeal, since that's her bear's name (the confusion was apparently because I add pumpkin to the oatmeal I usually make so the sweet potatoes looked like oatmeal at first glance.. making me "bad.").

I found it doubly funny was when Patrick was laying on the ground yesterday and said "Bad!  Bad!  Bad!" which was followed by Sadie looking over at him and saying:  "Patrick!  Don't call me bad!" all while Nani was on the phone to hear the sibling conversation.

In other Patrick news he pushed himself up into a crawling position on all fours yesterday.  So far his mobility is pushing himself backwards and to be honest I'm not really in a hurry for a mobile baby...  although I think mobility is rapidly approaching!

For more Quick Takes, visit Conversion Diary!
Posted by Cammie Diane at 8:38 AM