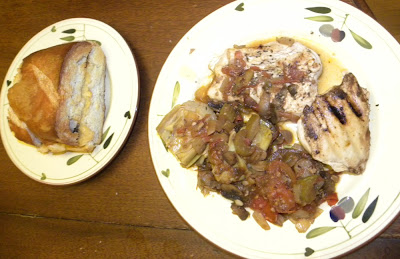 Here’s a “what-do-I-have-in-my-kitchen-at-this-very-moment-without-going-to-the-store” recipe! I made it rather slowly, dicing a slicing during the rare times when Sadie was playing on her own and Maggie was content in her swing.
First I sliced and began to sauté onions and garlic in olive oil (three onions, and what came to about three large spoonfuls of crushed garlic) and after that had been cooking over low heat for about ten minutes I added three stalks of chopped celery. After about ten more minutes I moved the onion/garlic/celery from the pan to the crock pot and added a generous splash of tomato juice (my guess would be about half a cup).

Back over in the other pan I added the sliced eggplant (about eight small Japanese eggplants, but between 1-3 large regular eggplants would work just as well, depending on the size) that I had already prepared (they had been cut into slices, salted, left to sit for over an hour and then rinsed so that it didn’t taste bitter) to a splash of olive oil. Then I diced up about a dozen mushrooms and added them to the eggplant. Finally I sliced about ten medium sized tomatoes into thin slices and added them to the cooking eggplant (which was on between medium and low heat, and which I had been mixing all the while). I also added a splash of balsalmic vinegar at this point to both the tomato/eggplant/mushrooms and to the crock pot.

Once the tomatoes/eggplants/mushrooms looked cooked I spooned them into the crock pot (pour the leftover oil/vinegar into your grease jar) and let it sit for a couple of hours.
When Paul got home I had him open up a jar of artichoke hearts I had (this will probably go in with the eggplants and mushrooms next time, but I just couldn’t for the life of me get that jar to open!) and spooned about three quarters of the large jar into the crock pot and mixed it again. I also added a little oregano, garlic powder, basic and dried onions to the mix. After around another hour I reduced the crock pot heat to low.
Fast forward to afternoon. I sliced about ten chicken breasts open and then spooned the crock pot mixture carefully into the middle spot and reclosed them. Then I put them on the grill (I think it was at 375 on my George Foreman grill) and cooked them for just under ten minutes (I watch until the grease pretty much stops pouring out of the bottom and that’s how I tell that my chicken is done!). While they were cooking I lightly sprinkled them with basil, oregano and a little bit of garlic powder.
I ended up having enough for dinner tonight, two additional dinners to freeze and one small dinner to send on home with my mom when she stopped by on her way home from visiting Gigi in the physical therapy rehab place.

I also tried baking some of the crock pout veggies into bread… but we’ll just say that was not a success. It was just too rich. After about three bites Paul and I were stuffed. However I am counting the veggies and stuffed chicken as a success! Not bad considering I made it up as I went along (based on what I usually have in my cupboard this does have a lot in common with my eggplant spaghetti and my other chicken and eggplant dish (the main difference is probably that this time the chicken is "stuffed!")!
Posted by Cammie Diane at 11:31 PM