Birth or Not? Here's Hoping It's Just Some Sick Hoax... 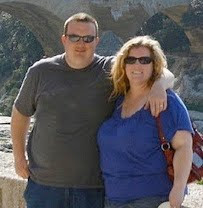 This is one of the most sickening things that I have ever read in my entire life. I first saw it over on National Catholic Register in an article by Tim Drake (the title? Have Baby, Will Abort).
Peter and Alisha Arnold, both 30, of Minneapolis are uncertain about whether or not to become parents... so they're going to let the people on the world wide web decide for them whether or not their child lives or dies.
I'm hoping that this is a hoax and that the couple are trying to make some sort of point (that in no way involves murdering a child). But from everything I've found googling the couple, there are only suggestions, because of the outrageousness of the claim, that they don't really plan on doing what they say they're going to do. Jill Stanek does think it's a hoax and I pray that she's right (the photo above is from her blog).
Now here's a quote from an interview with the maybe-if-the-world-says-yes-father-to-be:

Here's what the article on Shine from Yahoo! said about it:

"Which brings me back to my final, somewhat disgusted point: If you have to ask the question, be prepared for an answer you might not be ready for. If you are really asking anonymous masses to decide whether or not your baby should live, you aren’t fit to be parents in any way. If you’re cool with using your fetus as a pawn for national debate, or a ticket to instant fame, you aren’t fit to be parents in any way. If comparing what is a very hard choice for many families to your sad, clicky sideshow seems like a viable way to operate in the world, you are not fit to be parents in any way. A stunt like this isn’t worthy of national debate, no matter which side of the abortion issue you are on. Should the Arnolds get an abortion? That's up to them, ultimately. But I'm pretty darn sure no child should be left their custody."

I would like to switch the world "ultimately" in the second to the last sentence of the paragraph above with the word "unfortunately."
I would suggest everyone go over and vote for her to have the baby, just in case it is real. This is one case where it's better to be safe and vote for the baby to live, even if there's a chance that it's a hoax.
I was kind of shocked that they've actually used their names. I guess they haven't thought about what their googling (or whatever the search engine of the future is) offspring is going to think when he searches for mom and dad and learns about their little poll. I seriously wouldn't want to have to explain this sort of thing to me twelve year old someday.
Posted by Cammie Diane at 11:46 AM