The Pope Said What? (The Media Fails to Understand Anything Coming Out of Rome...) 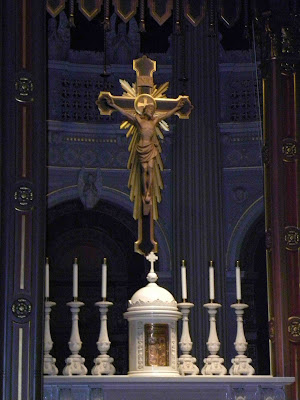 The media has enough trouble understanding Catholicism and Catholic teachings without L'Osservatore Romano releasing quotes from a new interview (book) with the Pope, which are taken completely out of context (and before any part of the book was supposed to be released at all).
This is why I have a problem when people say things like "the Vatican says (fill in the blank) is evil." and you respond with "where did you hear that?" and they say "Fr. so-and-so said it in L'Osservatore Romano and that's the Vatican's newspaper."
Sigh. Unfortunately a lot of people don't seem to understand that the Roman Observer does not have the teaching power of the Magesterium. Anyways, I digress.
The media is in a frenzy about something the Pope has "said." And they've taken the opportunity to announce to the entire world that the Pope has changed the Church teaching and that condom use is A-Okay now. It doesn't really matter to most of them that that isn't actually what happened. At all. It makes a good headline and good headlines sell papers.
Jimmy Akin has written a great explanation of what was actually said over at the National Catholic Register and I definitely suggest everyone who's interested in the Pope's opinion on the matter check it out (and he did say that it was a personal opinion).
One of the highlights of the article was this analogy which was written by Janet Smith. In the original interview the example that the Pope uses is a situation in which a male prostitute uses a condom. The Pope, obviously does not believe this situation is moral in any way, but instead indicates that the use of the condom might indicate that the person using it was showing a hopeful sign in that he cared about whether or not he hurt someone else (definitely read Akin's entire article though because he explains it much better than I do!). Here is Smith's analogy relating robbing a bank to that example:

"If someone was going to rob a bank and was determined to use a gun, it would better for that person to use a gun that had no bullets in it. It would reduce the likelihood of fatal injuries. But it is not the task of the Church to instruct potential bank robbers how to rob banks more safely and certainly not the task of the Church to support programs of providing potential bank robbers with guns that could not use bullets. Nonetheless, the intent of a bank robber to rob a bank in a way that is safer for the employees and customers of the bank may indicate an element of moral responsibility that could be a step towards eventual understanding of the immorality of bank robbing."

The story as it runs in the world press is just another chance for people around the world to become confused about what the Church actually teaches on these important matters.
Again, I strongly suggest you click here and read what Jimmy Akin has posted about the entire media skewing of the Pope's interview.
Posted by Cammie Diane at 11:32 PM