I don't know about you but one morning I just woke up and said, "Well... I don't have anything else to do today... no football games to write up this week... honey... let's have a baby." That is, it seems, what Joy Behar and the panelists who enthusiastically agree with her seem to think drives most women to have babies (and no, of course it didn't really happen that way!). Here's the clip. Be prepared. You will hear some idiotic statements if you click play.

For those of you who didn't hit play here are some of the highlights:

Joy Behar: "Do you think that some women actually just make the choice to have kids because they can't think of something else to do?" (around the 40-something second mark).
"Now people regard that as littering..." (having large families... and large in this conversation seems to be more than one or two)
"for billions of years we ended up having one or two children per women, and we're moving back towards that now..." (billions...)
Does anyone really think that that is why couples decide to be open to bringing life into the world (the answer, by the way, is apparently yes... at least in the group of women on the panel)? I have a hard time believing that anyone who is actually asking that question has ever spent more than a few moments with a child.
Then there was this article. I originally saw Gale's post about it and went over to read the whole awful thing for myself.
Erica Jong begins her article by letting everyone know what she thinks about motherhood. She has "endured an orgy of motherphilia for at least two decades." Her initial complaints include movie stars proudly displaying baby bumps for photographers and magazines describing the joys of motherhood. Thus begins the angry tone that continues throughout the article. 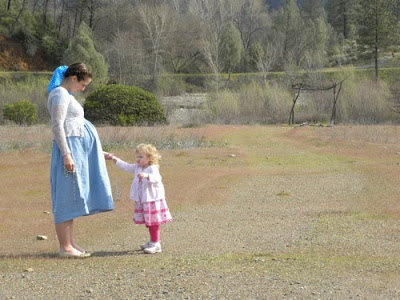 If Joy Behar thinks that women have babies because they have nothing else to do, Erica Jong thinks that babies are used to oppress women and that they do the job more effectively than men ever have.
People who's entire focus extends no more than an inch beyond their own nose (or is directed towards the nearest mirror) and who can imagine no greater good than doing what they think feels good at the moment, can't even begin to understand the idea of a vocation of any kind, and that includes the vocation of a wife and mother.
Christians are fortunate in a way because we have it spelled out for us. We are called to serve. With the Catholic concept of vocation we often have an even clearer idea of just who it is that we are called by God to serve.
And that is something that our modern world will have a very, very hard time understanding.
Posted by Cammie Diane at 12:07 AM

Email ThisBlogThis!Share to TwitterShare to FacebookShare to Pinterest
Labels: In the News, Motherhood, Vocations