The Sticky Subject of Halloween 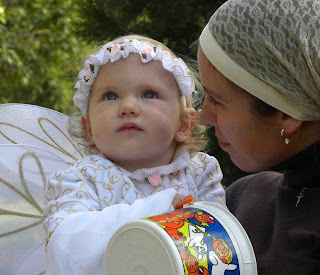 Before my conversion to Catholicism, I didn't realize that Halloween was, even among some Catholics, one of those hotly contested subjects that can tell a person everything that they could possibly need to know about a family on par with other heavily-assumption-laden-topics like headcovering, co-sleeping, NFP use and whether or not a household has a television (I'm hoping you note the sarcasm in italics and don't think I'm being serious...  I'll note it just to make sure it's not missed!).

As a protestant growing up I'd known families that were of the let's-go-down-in-the-basement-and-wait-for-the-end-of-the-world-every-October-31st variety, and so I approached the entire issue carefully, turning to the be-all-end-all of all sources of Catholic information for the answer, the world of Catholic forums (maybe we should just assume that all italics in this article aren't serious.  Just for today.). 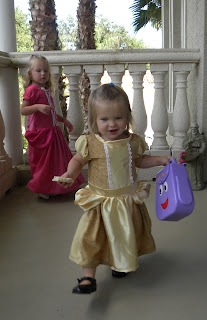 And I learned some very interesting things.  I learned that the Pope had condemned Halloween and said that it was Satanic.  The Pope.   When I asked for a source, the answer was never actually the Pope, it was usually a particular priest (whose books I have found very interesting) or an article in the L'Osservatore Romano (the Vatican's newspaper), which has caused it's own share of troubles over the years and shouldn't be read as some sort of infallible weekly report.  Responses to "but that isn't the Pope..." were usually cut off with "The Pope!  Are you going to question the Pope?!?!" Who can argue with that?

So I began to read, feeling a little bit guilty about my attachment to the holiday, which really comes from the fact that I think that dressing up can be fun, and that candy tastes good, and that I don't really see the harm in taking the kids to the local school/park/whatever and letting them run around dressed up as princesses or clowns.

I mean, don't get me wrong, I cringed when I got the Halloween costume catalog that some company sent us this year, complete with ten year old girls looking like they were ready for their very own street corner, just like I cringed a couple of years ago when I first saw a pre-teen girl going out with her family as a "sexy" version of Alice in Wonderland.  There are some major problems with the way that the holiday is celebrated in our culture... but you could say that about pretty much every holiday in our society.  When you make every holiday about spending money and you live in a world where "sex sells" you're bound to run into problems, or at the very least, the complete decimation of any really meaning. 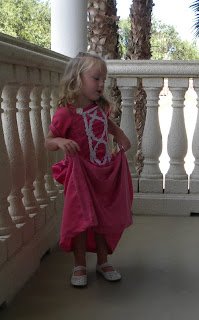 Our own celebration falls somewhere in the middle (in other words, not all costumes are religious).  The girls are dressing up as princesses today, and dressed up as princesses for the Halloween party we went to a couple of days ago.  And tomorrow Mae will be Saint Margaret (if I don't complete the Blessed Kateri costume I've been planning) while Sadie is Saint Scholastica.  We talk about the saints a lot as it is, year round and as we celebrate All Saint Days.

I guess my final thoughts on Halloween tend to be: Celebrate it if you'd like.  Don't if you don't want to.  But let's not pretend that parents who let their kids dress up and leave the house for fun are somehow doing them a great disservice and are not actually Catholic.  That's the part that I dislike: that this holiday has been raised up as some sort of litmus test of religious belief, when it is in fact simply the vigil of All Saint's Day.  And the vigil of All Saint's Day, just like All Saint's Day itself, has some real potential for learning and fun.

In the end, in our house, that's what it comes down to.  I want to help my children learn about the beauty and rich traditions of our faith.  So far I haven't felt that celebrating this day in two ways takes away from that.  In fact, I think it can be very enriching.

For more Halloween reading check out:

How do you handle this particular holiday?  Any big plans?
Posted by Cammie Diane at 7:34 AM