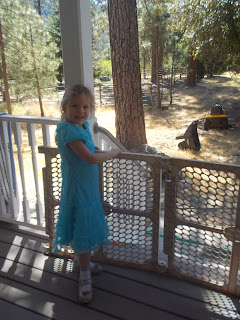 Sadie has been walking around, singing the Lourdes Hymn pretty much non-stop for the past week.  There are pauses and then suddenly I hear it being shouted at the top of her little lungs, often while she sits next to her brother.  Usually he's awake when she starts.  If he isn't, he will be by the time she belts out "Ave, ave, ave MARIIIIIIIIIIIAAAAAA!  Ave, ave MARRRRRIIIIIIIIIIIIIIIIIIIIIA."

On Wednesday night Sadie walked by me as I nursed Patrick and announced that she was going to put the cats to bed and that she needed to bless them.  Have I mentioned that she's allergic to cats?  She is.

Five minutes later she sniffled her way out of the room the cats were in while Nani followed behind and offered an explanation that went something like this:

"Dee resisted being blessed and it took some effort.  Sammy held still.  She just wanted it to be over."

And so the cats were blessed and ready for bed... and Sadie sneezed herself to sleep...

Later Nani explained.  Delilah had apparently tried to escape the blessing.  But Sadie wasn't about to let that happen and ultimately Delilah plopped down on the ground and allowed herself to be blessed.

I guess there are worse things.  When I was seven a dental hygienist came to our class and stressed the importance good dental health, especially flossing.  Later that day my mom found me and one of my best friends attempting to floss my cat teeth.  I think he would have preferred the blessing.

Then there was the dinner conversation.

Me:  "It's really too bad about the cat allergy."
Sadie:  "Don't worry.  I won't be allergic to cats anymore when I'm a saint in heaven."

Today we're driving to a local craft fair to walk around... and I know exactly what song will be coming from the back seat.

And soon I need to head back to the craft fair and find some heavy duty brown fabric that can stand up to lots of play.  She's requested a Carmelite Habit for the second year in a row... and it's June, so her birthday is just around the corner!
Posted by Cammie Diane at 10:29 AM