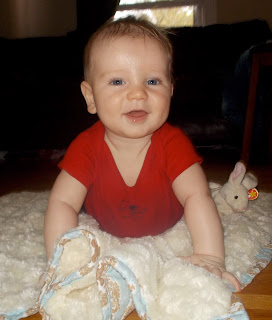 Patrick is still working on coordinating all his little limbs to crawl.  He's less determined than he was a few weeks ago, because he can get around our house pretty quickly by sliding along on his tummy, pushing himself with arms and legs, so crawling is no longer quite as urgent as it was last month.  He did seem pretty disappointed when his double back leg bunny hop didn't work as a crawling method.

So I was relieved yesterday when I saw Mae approaching with a "in that position he looks like a rocking horse" look in her eye and shouted "No, no, no!  Do not ride your brother!" and she backed away instead of trying to hook her little leg over his back more quickly, which, I have to admit, has been a problem in the past.

He's still a little distrustful of his little Big Sister, but at least he doesn't squeal every time she comes within a two foot radius.  She just went over and kissed him and hugged him and, while he had a slightly suspicious look on his face, he didn't protest the cuddles. 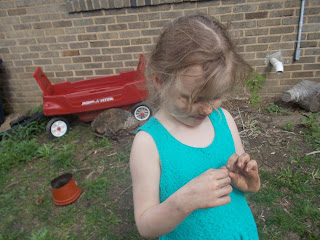 Sadie's obsession of the moment?  Volcanoes.  And dinosaurs... but mostly volcanoes.

Yesterday Mae had a fever (that is thankfully gone today!) and so we took it easy and tried to play quietly while she napped for most of the day (that's how you can tell when Mae is really sick).  And I gave Sadie choices like "would you like to watch this science documentary or Angelina Ballerina or Tinker Bell?"  And I was really hopeful that we were about to spend the day with Tinker Bell but 100% of the time she would shout something like "Let's watch Walking with Monsters!" and I would refrain from saying "but we've watching it one thousand billion times and don't you think it will scare Patrick to see those lizards eating each other?" because I know the answer to that is "Walking with Monsters!"

When she asked if we could watch the Smithsonians special on Jurassic Park and the theories behind making a dinosaur out of DNA, I said "Oh look!  A National Geographic Special on the wonders of the earth!" not realizing that the movie was completely about volcanoes exploding spectacularly, ending with a nice description of how Yellowstone is going to turn into a super volcano any moment and how it will likely kill us all.

Yeah.  So the volcano movie is off the list of documentaries we watch together.  And I've had to say about 10 times "I guess it's a good thing we don't live near any volcanoes..."

Yesterday may not have been a parenting win...

Paul and I had a conversation on the three hour car ride to the airport that went something like this:

Me:  "And all the other bloggers are publishing books and I want to publish a book and.... blah, blah, blah... whine, whine, whine..."
A while later my darling husband said something like:  "Well, let's see.  What would you write about?  What's you're schtick?" (Followed by a conversation when he spelled the last word in that sentence and claimed that it really is real, although google spell check says otherwise).  "You're not funny..."
Me:  "I'm not funny?"
Him:  "Not really."
Me:  "I think that sometimes I'm funny."
Him:  "Yeah..."
Me:  "I mean think about it!  Sometimes I am!"
Him: "Yeah... No... It's just... I'm trying to think of a time when you were funny..."
Me:  Glaring.
Him: "I guess there was that picture of Mae that you posted when she fell on her face at the dinner table and you labeled it 'A Typical Breakfast.'  Some people might have thought that was funny.  Although most of the people who think that a picture of a little kid falling on her face is funny are probably jerks..."
Me:  "It was a funny picture!  And she wasn't on her face."
Him:  "She was.  She fell on her face.  And Sadie's just sitting there eating breakfast.  And you took a picture."
Me: "I don't think she's on her face."
Him:  "She is... Maybe you should write fiction. Fiction is what you wrote before.  It's kind of your thing..." 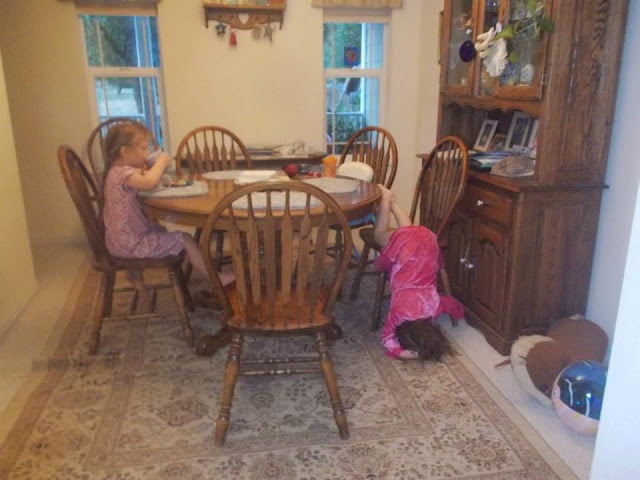 Maybe yesterday's doctor's appointment doesn't deserve it's own post.  It was just one of those appointments that I hope that none of you can relate to but I'm sure some of you can.  Or else I just pick all the winners.

It wasn't really that bad.  I mean, in some ways it was, but it was more one of those you-throw-your-hands-in-the-air-and-marvel-at-the-crazy afterwards type appointments.  I mentioned it in yesterday's post.  I thought about giving it it's own seven quick takes but I'm really trying to be less whiny (I know.  Fail.).  So I'll try to squeeze it into one (or two?) takes.  Okay, we'll make it two because there were two topics.

And maybe she could have left it at that but instead it came up around a half dozen times over the course of the appointment, because I need to go to her parish where it's progressive and the priests inspire you and aren't fuddy duddies that talk about things they shouldn't talk about.

I smiled and smiled in a polite, strained way, until I thought my face was going to split in two and kicked myself afterwards for not disagreeing at all, because I'm so non-confrontational in real life, but I felt, even at the moment that I should have said something... instead I just sat there... smiling a smile that was clearly oh-so-uncomfortable, not saying anything at all...

Um... yeah.  I feel like I've done something right in my life.  Kindergarten here we come!

Of course, it's a good thing we're homeschooling because according to the PA I saw for yesterday's doctor's appointment Patrick is going to be breastfeeding until he's 10.  This is because I mentioned that he hasn't started solids yet.  I'm okay with waiting.  I started the girls when they were interested (too early for Sadie I know in retrospect).  I'll start him when he's interested.  He's not... so... we're waiting a bit longer.

Apparently this means he's "too attached" because "boys aren't as brave as girls" and I need to force feed him or he'll never try new things.  I don't know.  I've never force fed anybody and I have kids who love calamari if they're given the chance to eat it and a four year old who has told me she'd like to try alligator and venison.

So.... so far I've been told that I can start him on apple juice (at four months) and now that I'm damaging him by allowing him to be exclusively breastfed for a bit longer (I'm especially okay with that because of his allergy).

I'm ignoring 100% of the medical advice I received yesterday, taking my inhaler prescription and continuing on my way.

I'd like to use #7 to apologize for my uses of "ummm," "yeah," "so," and any sections with repeated letters for emphasis.  It's just been one of those days when the rules of grammar have been done away with on this particular post for dramatic effect and tone.  Sorry about that.  Let's hope tomorrow is a little less spastic...