What I Wore Sunday: Sandbox in the House Edition

Last night, in between Patrick's frequent wakings (I have no idea what was going on.  He's usually my little champ.  New tooth maybe?) I rearranged the room that is no longer for dining and set up a sand box.  Then I filled it with 40 lbs of rice and 8 lbs of brown and pinto beans.  This morning Mae found it.  When she saw me she rushed over and kissed me repeatedly.  It was definitely a hit. 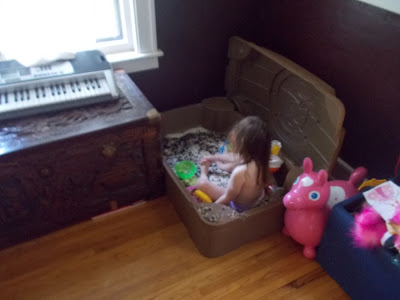 I wrangled her into clothes... this is a size 6 outfit... and it's not really all that big... the shoes on the other hand... they aren't quite a perfect fit: 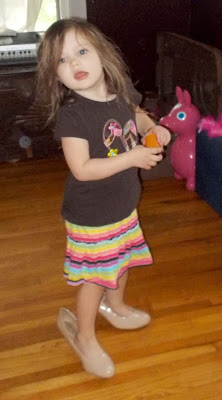 Then it was off to Mass.  We pulled into the parking lot and Paul looked at me and said:
"We're really early."
Me:  "We are?" Glancing at the clock I realize that 'really early' means around 15 minutes early... however fifteen minutes with our trio can feel much, much longer.  And if Mass is going to be 80 minutes of (hopefully) sitting (but more likely pacing) that means more like 95 minutes of sitting.  "Let's go around the block a few times."  I suggested.
Sadie:  "Where are we going?"
Me:  "We're just driving a little."
Paul:  "Did you not know what time it was when we left?"
Me:  "I thought we were late."
Paul:  "You thought we were late?"
Me:  "We're always late."
Sadie:  "Why is it taking so long to get to Mass?"

We arrived (again) five minutes before Mass and walked in the front door.  Mae went with Paul this time in the backpack (she's decided she likes being up on his back high in the air) and Patrick was with me in a carrier.  Five minutes into Mass Patrick was putting on a rare show (he's usually pretty good... now that I think of it all signs are pointing to new teeth...).  Mae was trying to climb out of the back pack using the frame.  I decided that our seats were so far to the side that I wasn't leaving Sadie there on her own and brought her with me to the back of the church.

Okay, see this picture of Sadie.  She's wearing a hand me down.  That dress was mine.  My parents bought it for me when we visited Williamsburg when I was in fifth grade...  It's a tiny bit big... but not much.  She picked her outfit: 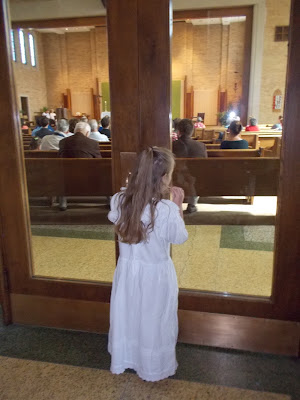 At first it was okay in the back.  It was quiet.  Our priest gave a fantastic homily.  But after the homily more and more parents fled to the hallway and suddenly it felt a bit like social hour with people talking and kids running and screaming.

I don't mind screaming and crying.  It happens.  Running and talking?  I'm not a fan.  It is still Mass.  But I digress...

I backed away from the crowd, amazed that Patrick could be falling asleep with all the noise.  Sadie found a prayer card of the Pope: 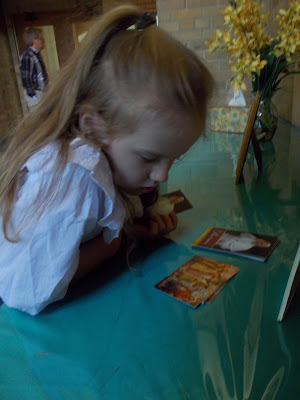 And I realized I had my camera...

She was smiling until she saw me taking the picture...  serious faces are the new smiles of the moment in our house: 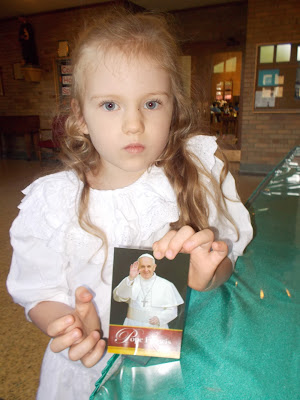 Paul had the toughest job: Wrangling the Bae: 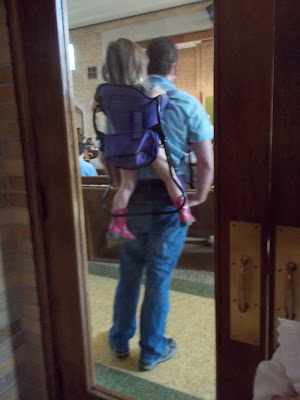 Here's a self portrait of the finally (barely) asleep baby.  His sister grabbed his hand during the sign of peace after we went back inside and woke him up... 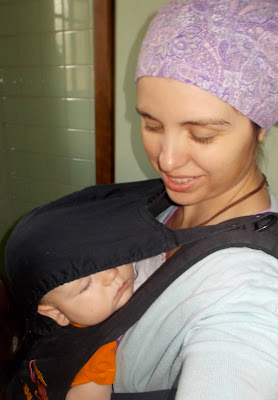 And here is my entire outfit.  I'm promising myself right now that it really was more flattering than it appears in this picture... because in this picture my khaki Lands End skirt looks like some kind of bulky long shorts....  The top was on the clearance rack at Old Navy for $2 something during our trip to the mall earlier this week and I finally splurged and bought a new package of cami-secrets since my white ones were entirely worn out, so I'm basking in the new shiny whiteness of it.  The snood is one of my purple paisleys.  The sweater is from Old Navy back in the day... because I'm fairly certain I wore it for my confirmation/first communion back in 2007.

And the shoes.  Oh the shoes.  Okay.  They aren't pretty.  But they don't make me limp and right now that is a big plus.  A huge plus.  Actually... I might love them for that.

The boy wore a t-shirt and khakis.

After Mass we stopped at Walmart and picked up a few more $3 shorts and tops for Patrick, because I don't have many 24 month outfits for him and that's what he's wearing right now (he's my teeny tiny 7 month-er).  I weighed myself holding him and not holding him and the difference was 22 lbs.  He's certainly looking taller to me:


And finally, I saved the best for last.  Do you see what this is? 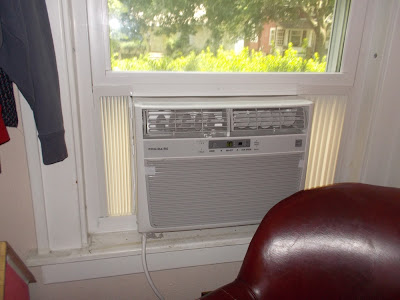 I just went over and turned the temperature up because it was feeling too cool!  How wonderful is that!

For more WIWS head over to FLAP!
Posted by Cammie Diane at 3:32 PM