Rest in Peace, My Friend... 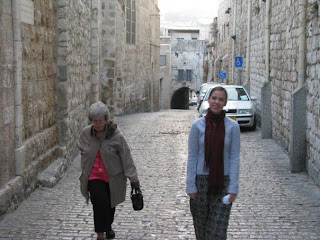 Over the past few years I have asked for your prayers for a friend of mine who was battling cancer...

My dear, sweet friend Diane had passed from this life into the next.

I first met Diane when I began helping her in the Church office back in 2007.  She was a daily communicant and on Tuesdays we would work in the parish office together after Mass and then go out to lunch.  She was one of the first people to hear when I was expecting Sadie.  She was actually there when I told Paul that we were about to welcome Baby #2.  And these past years she has been one of my dearest friends.

We bonded on a pilgrimage to the Holy Land in 2008.  We were both struggling through the intense days of prayer and travel. We'd be up and about at 6 am and usually would return to the hotel 12 hours later, traveling from site to site in between.  I was eight weeks pregnant and battling constant nausea and exhaustion and she was enduring pain and illness as well as the constant travel took its toll.

A front seat on the bus became a matter of utmost importance during those two weeks, and Paul would rush to reserve one for Diane and I and we would breath a sigh of relief as we sat back against the soft blue seats, able to see out the front window, which meant hopefully being slightly less sick. 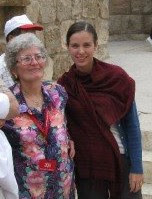 The top picture is another moment that stands out in my mind as clearly as if it were yesterday.  We were walking the Via Dolorosa with our group and we fell further and further behind.  Paul had been sent on ahead, because the entire group was running late, to ensure that we didn't lose our spot at each stop along the way, but Diane and I were slow in our movements through the Old City, until we had completely lost sight of our group.

There are a few spots along that old route that stand out to me.  The sight of the scourging at the pillar is clear in my minds eye.  The Church of the Holy Sepulchre stands out as well, where we crowded inside the tomb and around the little interior room around the mouth of the tomb for Mass (the aedicule).

But perhaps the clearest moments in my memory are the ones when we two walked alone, arm in arm, taking slow steps over the slick, wet stones stones.  Young men came out and stood in the doorways and watched us, all alone, going by and we were incredibly nervous as we made our way to the first stop on the route.

In the years that followed we would talk about our adventure and about how nervous we'd been as we'd made our way slowly in the wake of our group, knowing that they were getting further and further ahead.

She was the best and sweetest of friends.

When we moved to Florida she was battling intense pain and illness, but didn't yet have answers to the "why" behind her struggle.  A while later we learned that she'd been diagnosed with Stage 4 ovarian cancer.  I spoke with her during her first cancer treatments and was thankful when we finally made it home last summer and I was able to sit with her during the afternoons on Mondays and Wednesdays and Fridays, since we hadn't been sure with her prognosis whether she would be around when we made it back to California.  I would sit an sew snoods and we would chat for hours.  We watched the Waltons together and I made custom fitted little snoods for her as she underwent chemo.  And then, at the end of summer, we had to move back east. 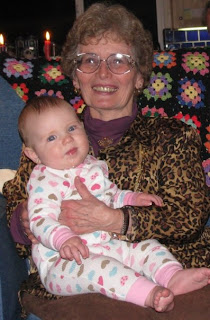 This past year I have struggled with the guilt of being away.  I have learned that I am not the best of friends from a distance.  I was swept up in the busy-ness of these past months, being in the hospital and sick, then having a new baby and juggling the three little ones, at least those are the excuses I make for myself.  I would think of calling in the morning, and realize it was 4 am back in California and by the time I'd think of it again I would be closing my eyes at night.

And then I was embarrassed to call.  It had been so long.  I was such a horrible friend.  Was she upset with me for the long silence?

When I returned to California this summer I was incredible grateful.  I had a chance to see her one last time... A chance to say goodbye...  We had heard that the cancer was back and that she wouldn't be fighting it this time.  And then we'd heard, again and again, that the people closest too her thought that this was it.

I walked into her room and burst into tears.  I wasn't sure she'd recognize me through the drugs and exhaustion but she said, in a soft voice "I'd known you even if it had been a thousand years" and I sat at her side and held her hand, managing to stop the tears after a few moments.  She asked about Paul and I promised that he would visit the moment he got in (and he was able to during his half day in town).

I knew that this news was coming.  I've expected it every day these past weeks.  And now, finally, she has left behind the pain and suffering of this world.

So I ask any of you who have a moment to pray for the repose of the soul of my dear, sweet friend, Diane... May she rest in peace.
Posted by Cammie Diane at 8:19 AM