"Do You Remember Pluto?" And Other Sadie Questions 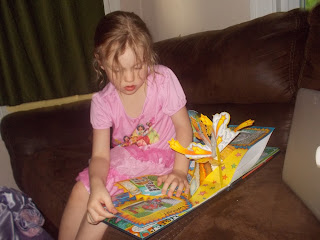 Maggie has been going to bed after her bath and then Sadie and I clean the downstairs and after that she can choose what she wants to do which is pretty much always the same thing.  She sits down and looks at her favorite book

After watching Sadie stare at a pop-up book that has a page of the planets in it for about half an hour:

A few minutes later after a conversation about Pluto... 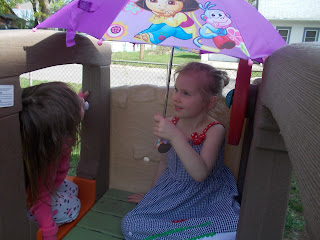 Sadie:  "Mommy, you remember Pluto?"
Me:  "Yes."
Sadie:  "It goes around faster than Earth."
Me:  "Why do you say that?"
Sadie:  "Because look at the picture." (I look at the Wikipedia picture we'd been looking at since her book doesn't have picture of Pluto in it and she wanted to know if Pluto was blue a few minutes earlier.).
Me:  "Well all the planets are spinning around fast.  And I don't know if Pluto is going faster.  That's just a picture showing it from all sides, while the Earth picture is just a photo and is still.  The Earth is going fast too.  Let's see if this page about it says it's going faster."
Sadie:  "Pluto is going faster."

And then it was time for bed.  Now for another curious day with lots of questions to be answered.  Thankfully a giant used Space Atlas arrived yesterday to help me with her many, many questions.
Posted by Cammie Diane at 7:34 AM