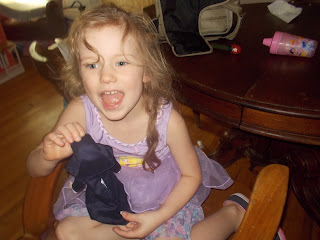 In the past few weeks the front of our house has been piled high with packages that I've been steadily bringing in and unpacking.  You see, about two weeks ago I began ordering the homeschool books we plan on using for the upcoming year, and I found most of them used on Amazon.  The books rolled in from around the country and for Sadie it's been like Christmas nearly every day as she waits to see which book is inside each package.

I've been in the love with the idea of a Classical Educational since I first began researching homeschooling.  I've been reading and re-reading The Well-Trained Mind

for at least four years.  Last year we bought the reading list for pre-school and kindergarten and worked through it.  This year I purchased most of the first grade books, knowing that next year, at the end of law school, might not be the best time to be going on a book shopping spree, even when many of the books are listed for 1 cent.  I figured we could re-read the kindergarten books again, and begin reading the first grade books slowly, doing some of the fun projects (mummifying a chicken!) and seeing how things go.

This first year will be very relaxed, since she's basically read most of the kindergarten books, but I don't want to go straight into the first grade stuff, and we're taking reading and writing slowly, and ambling through the many story books that are part of the first grade curriculum for fun.

Except that Sadie isn't really happy with the idea of "slowly" and gets her school books out each morning and sets herself up and asks for a pencil and works and works and works until I point out that her little hand is looking very tired and that maybe we should do something else and she grudgingly agrees.

There is a point to all this, however (since this is my Saturday Morning "Nun" post).  You see, the first year books cover ancient times and many of the books that have arrived are story books of Greek myths.  And the book that Sadie loves the most is Pandora

The book is beautifully written and begins with Pandora obsessing over a jar that she is forbidden to open.

The first time we read it Sadie began to shake her head.  "She's just like Eve, isn't she?"  She said with a sigh.  We were halfway through and I really didn't see the similarities yet (and I only vaguely knew the story... there was a box or something... Pandora opened it... bad things came out...).  Then we read farther.

Pandora was the first woman, the next page said.  Her passion to "know all things" causes her to sneak in and unseal the jar and peek under the lid, unleashing evil into the world.

Sadie spent the rest of the day talking about how that story book reminded her of Eve in the Garden of Eden, and even had me get out the new Bible

that we got for this year so that she could compare Pandora's curiosity and disobedience (for it had been decreed that she not touch the jar) with the story of Adam and Eve and the "Apple" and the Snake.

In other news I caught her kneeling next to Patrick whispering to him about growing up to become a priest. No pressure there, little guy... no pressure at all...
Posted by Cammie Diane at 7:50 AM