What I Wore Sunday: Patrick and the Chapel Veil Edition

After Mass, with the house already a too warm 78 degrees and rising, I sent Paul down to the basement to find the air conditioner.  I was hoping it had made it through the first flood and the second flood and the third flood and the sewer back up unscathed and it had: 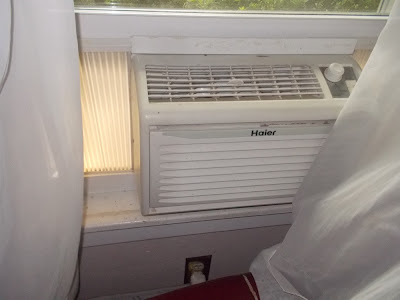 It's been on for an hour and a half and... well... the temperature hasn't actually risen.  And there's a nice little pocket of cool air immediately around it.  The chair next to it feels nice.  I'm sitting about ten feet away and I can't feel a difference at all.  So yeah.  But it's not 83 right now, which is what it was as I sat on the couch not moving and not getting anything done after cleaning up the living room and dining room, because it just felt too warm to move.

But I don't do well in humidity.  Any humidity.  Even Michigan humidity which I recognize is likely less than half of what we experienced even at 8 am during January in Southwest Florida, but which still makes me whine "It's toooooo humid!!!" every ten seconds or so, at least in my head.  That's where I try to keep it, but sometimes it spills out onto the keyboard in facebook posts every hour updating my friends on the temperature of my house.

Give me 99 and scorching dry heat any day.  But I digress.

The air conditioner is doing it's very best over there.  Even though it's "very best" kind of stinks.

And I am making baby steps towards getting used to not living in a totally crackling-ly dry climate.  Teeny, tiny, baby steps.

Now.  Prepare to be bored.  At least by my outfit.  I threw in a few cute pictures at the end, but first you have to get past my repeat outfit.  Here is what I wore today: 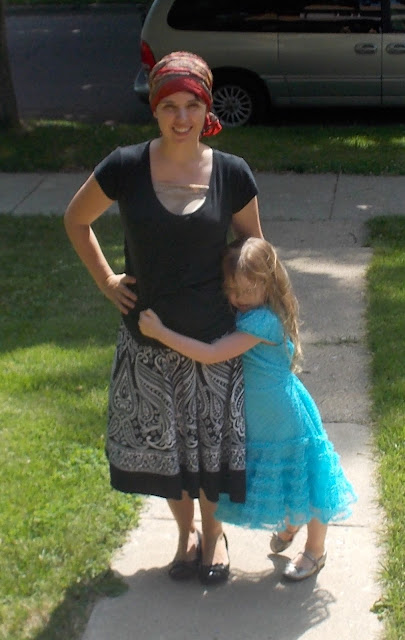 Why yes, that is the skirt and top from a Ross in El Paso that I wear at least a couple times a week.  And those are my super styling Walmart flats from Butte Montana.  And the scarf on my head, which I grabbed at the last minute out of the car after someone (ahem...) stole my chapel veil (more on that in a minute...) belonged to my grandmother (and before that it was her sisters according to the small hand sewn label on it).

Sadie's wearing her new Costco dress with her Payless flats which I bought less than three months ago and which I'm barely able to squeeze her toes into now.

Then there's Mae.  This was her reaction to my request for a smile: 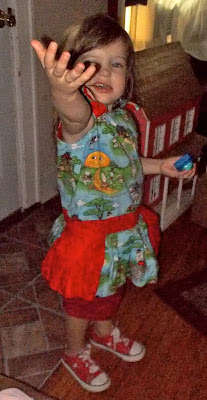 She's wearing a dress I made Sadie back in the day, some red hand me down shorts and a pair of sneakers that are a tiny bit too big, but which she loves.

And then there's the chapel veil thief...  But she did look lovely...  Until she got ideas... Ideas involving her little brother... 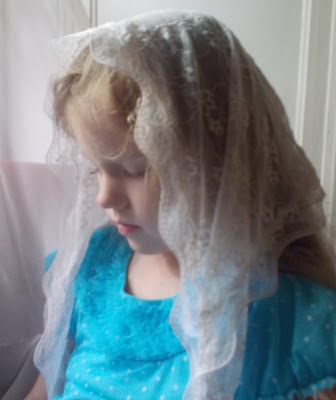 Oh to be a little brother... I looked away for a few moments after making lunch and came in to found Patrick... being "dressed up" like a "russian" (after a request for elaboration "a russian ballerina").  Poor kid.  No wonder he's so desperate to crawl.  He's planning an escape from home: 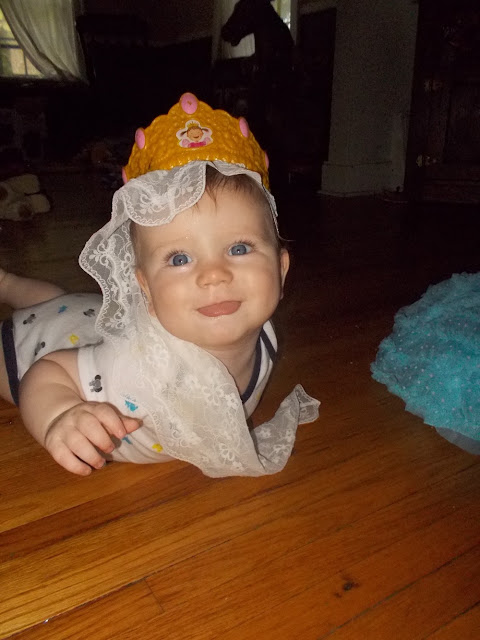 For more WIWS head over to FLAP!
Posted by Cammie Diane at 12:55 PM