You might remember when I made this quilt blanket tube for Mae and she was so very not impressed.  I'd used lots of different fabrics and textures and was absolutely sure she'd love it because she loves wrapping herself in blankets and she was like... "No way.  Get that thing away from me."

So for a while, before Paul picked up a weather proofing door thingy (yup, I have no idea what it's called... It's one of those things that goes under the door and opens and closes with it so it doesn't feel like an icy wind is coming under the front door all the time) it was rolled up in front of the front door to stop drafts.  Sadie used it.  She'd love to wrap up in it and snuggle.

The other day Sadie climbed into it and Mae glanced over and suddenly... bam.  She actually paid attention to what it was for.  And suddenly she was a fan: 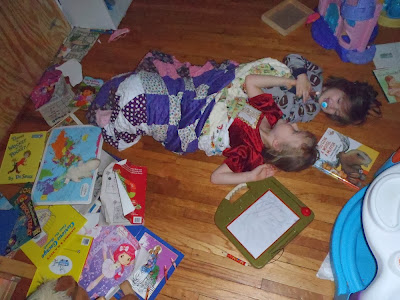 Sadie's becoming quite the little photographer.  She snapped this one the other day, which was nice because these days when I snap a picture of Patrick it's usually of him charging over to attempt to take the camera away from me: 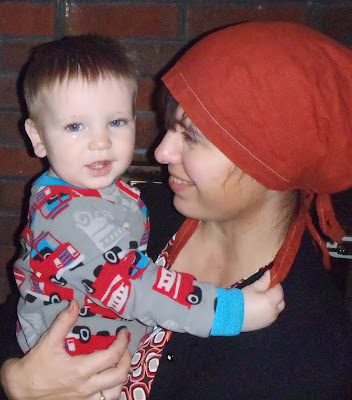 This picture is from the What I Wore Sunday When I Almost Got to Go To Mass edition.

Sigh.  I almost wrote a post about in on Sunday but then it was just too frustrating and I had too much to do.

So on Sunday we had that Severe Weather Warning along with most of the Mid-West and I wasn't about to walk to Mass with the kids in the storm (although at that point it was mostly high winds).  I decided we'd just suck it up and take the kids to the 6pm Mass, even if it meant standing outside with screaming the whole entire time, because at least we would have tried.

I made dinner early and got the kids bundled up and dressed just as the storm began to hit.  And Paul went out to get the car and we were both smiling about how we were actually running early for once and the kids didn't seem to be as cranky as they usually are at 6 with bedtime (for certain little people) rapidly approaching and then... the van wouldn't start.  I had started to worry by the time Paul came in and shrugged and told me the news.

And we actually talked about walking but decided that with a severe weather warning and words like "lightening" and "tornado" being used to describe the possibilities it probably wasn't the best parenting idea.

But I did have Paul snap this picture (when we were still "running early") of my new dress.  This was one of my $7 Thred Up dresses.  Since I've been talking about my online thrifting experiences so much I thought I'd show you something I actually got for myself! 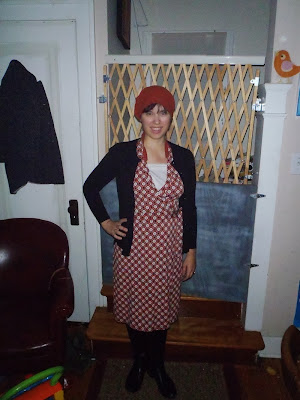 It was a little bit big, mostly because all the busy-ness around here has me shrinking again and I hadn't yet realized that apparently I'd dropped a size, but I still really like it.  And it's a wrap dress so it has a lot of potential for working with a lot of up and down weight fluctuations, which is always a plus!

Have you read JoAnna's blog and followed her son Peter's progress as he's gone through cast after cast to correct his club feet?  I've been amazed at how dramatic the difference has been in such a short amount of time from the casting as she's documented it on her blog.

This morning she's asking for prayers as he goes in for surgery and I wanted to pass the prayer request on to all of you!

When I first heard of Reece's Rainbow and some of my friends began talking about international adoption (particularly of children with disabilities), the story of a little girl who was 8 years old and 9 lbs stood out in my mind.

Yesterday a few of my friends posted an update to that story on facebook and it had me smiling all morning.  I wanted to share it here.  Definitely scroll to the bottom to see the amazing transformation that can occur when a loving family adopts a child.

I made three more ornaments for the Jesse Tree last night and I have to say I love felt.  I love how forgiving it is and how fun it looks when it's done.  And now my mind is bursting with kid's felt decorating ideas... 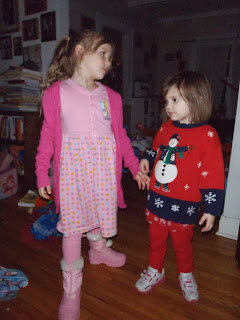 Two meetings down, one to go.  Today's the final meeting of the week. Our case worker will be arriving at 9:30, which will mean Mae will be doing her therapy, Sadie will be doing school and Patch will hopefully be asleep.  I'm hoping that when the meetings over we'll have some ideas on how to proceed with testing for speech and occupational therapy.

It would be super, super awesome if we could get at least the testing set up during Paul's Christmas break (which is rapidly approaching).  But we'll see.  I have no idea how long the wait for testing is or if the wait is just for getting in to see someone (and I'm not sure if getting a prescription to go to the University's pediatric center would by-pass that wait).

Lot's to find out!  In a couple hours we should at least have some answers!


For more Quick Takes, visit Conversion Diary!
Posted by Cammie Diane at 7:21 AM