We had quite the day today.  I'm exhausted.  It started out with a wonderful twist.  Shortly after Paul left for school and I got the kids into their costumes my cell phone rang.  I picked it up and it was one of Mae's therapists asking if I'd gotten the message that the paper work had cleared and they were ready to start therapy today (and were outside)!  Five minutes later one of Mae's ABA therapists and her intern were working with Mae in our dining room (just around the corner from where Sadie was doing her school).

Mae had so much fun.  She said so many words and kept on saying words after therapy was over.  Sadie even got in on helping at the end when they had her do a few activities to show Mae (and Mae then did things she'd previously been refusing to do!).

Then it was time for Mass.  The kids (okay, Sadie and Mae) were pretty excited to get to wear their little habits outside.  Then we got outside and it felt like everything was conspiring against us being on time.  A tree went down across the road that Paul takes to get home (and his class getting out only left 15 minutes to get to Mass anyways, including driving from his school to the house) and so he had to back track and go another way, and we started to walk and met him along the way to the church after he called us and told us about the detour.

Apparently last night's storm wasn't small since a tree also fell on one of our neighbors' house.

So we were late... but we made it... and here are a few of the pictures I snapped of our little Saint Therese, Saint John of the Cross and Saint Scholastica: 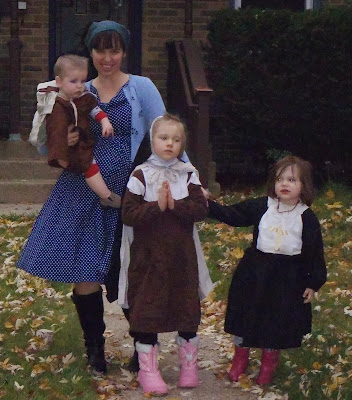 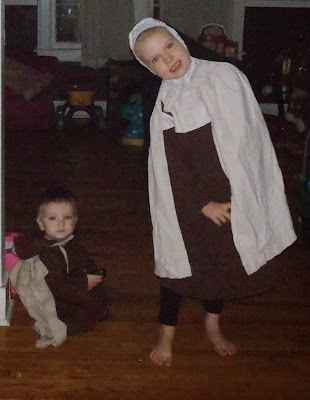 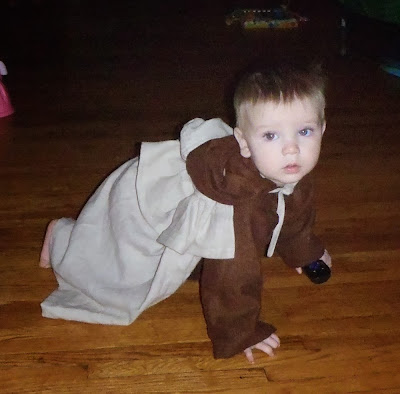 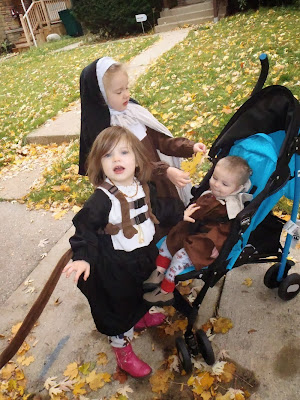 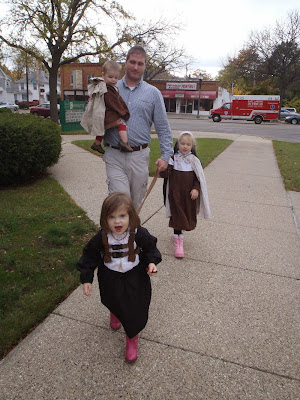 I love these little individual listening devices that our parish has.  And I've found that if I hand one to Sadie she holds it to her ear and listens and holds perfectly still for an entire Mass.

She's pretty good without one, but I'm amazed at her focus when she has it up to her ear.  It definitely makes being present at Mass from behind the glass doors in the narthex easier. 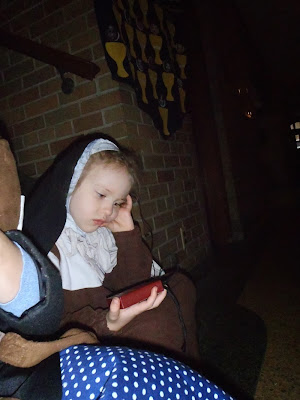 I wouldn't be posting this photo if it weren't for the awesome story that goes along with it.

You see, today I came across a clearance 70% off Halloween costume in my size.  It was for $13 and I thought, hey, why not.  I knew I'd be changing the neckline a bit to bring it up higher, but that would only take a few minutes.  And I had a feeling that the girls would love it if I joined in with their dress up games once in a while.

I had no idea how right that thought was.

I told Sadie about the dress and she begged me to try it on.  I did.  Mae's face lit up.  She was so excited.  She started dancing around the room singing.  I'm not sure I've ever heard her sing.

And then she grabbed my hands and stared into my eyes, repeatedly, a huge smile on her face.  We spent a lot of time holding hands and dancing around the living room together.

I couldn't believe it.  This child who wouldn't look when her name was said, who wouldn't look for loud noises and who had mastered the art of looking just past everyone was voluntarily gazing into my eyes while I played with her.

I have a feeling I'm going to be wearing this dress more than I thought if it makes her this incredibly happy (and Patrick and Sadie were both exceptionally giggly too!)! 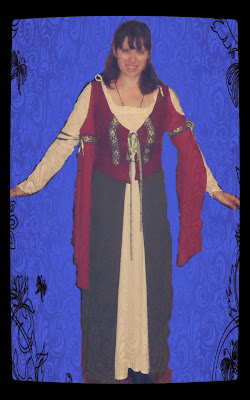 So apparently I've been sucked into bad amateur photo editing tonight.  And that brings us to Quick Take #5:

Tomorrow Paul takes the MPRE... I cannot wait for this thing to be over.  Between his third year of law school, working just slightly under the 20 hours a week allowed by the bar, and studying for this test he has been working around the clock to get everything done.  It would be nice to have this test behind us.

If you have a second a prayer that he does his best would be greatly appreciated!

I made this treat this week for the girls... and it's lovely.  And easy to make.  Here's how I did it.  I mixed about a cup of softened coconut oil (but not liquid) with 1 teaspoon of peppermint extract and 1 teaspoon of vanilla extract.  I added honey (I've done it with maple syrup too) to one of the batches.  And a pinch of sea salt.  And about a half cup of the every-major-allergen free chocolate chips that I occasionally get as a very, very special treat.  I mixed the ingredients together and spread it (the thinner the better I've found) on parchment paper on a cookie sheet and put it in the freezer for a couple hours and when it's frozen I break it into pieces.  It is a huge hit with everyone in the house! 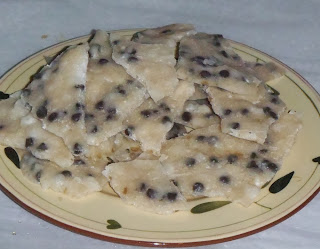