"Rationalizations" (in which I talk about the Awesomeness of my Husband) 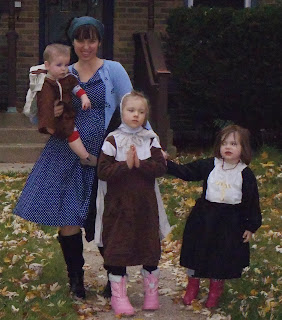 A long time ago I received a comment on a post where I was talking about the difficulties of attending Mass on my own with the kids that simply said something like:  "And where was your husband during all of this?"

I kind of shook my head when I read it, because in the post I'd explained exactly why he wasn't able to attend with me.  I've actually mentioned it just about every time I've talked about this particular struggle for that very reason, but it still comes up (in a more polite, curious sort of way most of the time, which I don't mind) and so I thought I'd devote a post to this particular subject, so that anyone who's wondered and hasn't asked can have their curiosity sated.

I'm actually considering making a FAQ page up at the top, where I can throw the answers to such burning questions (which come up more often than others) such as "Why don't you attend Mass as a family?" and "Do you force your daughter to wear dresses?"

I know, I know, some of you are probably thinking "Don't do it!  This doesn't even deserve a response!" because I get that response quite a bit too (maybe in direct proportion to the other comments?)... but it's come up quite a bit and so I thought I might as well address it.  And I also thought I'd write it because every time I've that sort of comment pop up on my screen I've felt like defending my husband since apparently my words haven't sufficiently expressed just how awesome he is and the commenter has somehow missed it.

Here it is, for anyone who's wondered and missed it the other times I've explained, the answer to:  "Why are you alone with your kids at Mass?!?!?!" 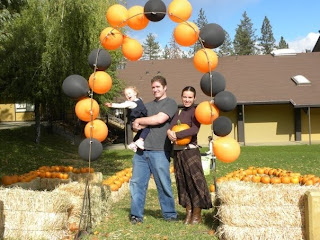 My husband is pretty amazing.  He gets up early with the kids on weekday mornings and gives me a chance to get dressed, write a quick blog post (when there's time, which unfortunately has been less and less often lately) and get dressed.  Then he hurries upstairs and gets ready for his day while I get Sadie ready for school and Mae ready for therapy.

He rushes out the door, usually before the therapists arrive at 9 and heads over to the law school.  On days when his schedule allows, he comes home for dinner and to help out at bath time.  After that the little kids go straight to bed. And while I finish cleaning the house he heads back to the library (or an open room in the law school after the library closes) and studies until... oh, I don't know... one or two in the morning.  Then he comes home and sleeps for somewhere around four hours before he gets up and does it again.

Starting on Friday there's an extra twist.  He gets up and goes to class.  Then he comes home at lunch time and we eat a quick lunch before heading out to do any errands that need to be done for the week.  This is my time out of the house.  I've been known to drag my heels to make it last longer... because I know that when we get home he's going to be studying.  Some weeks, if he's very, very lucky, he squeezes in a nap before his shift as a doorman begins at 7pm. 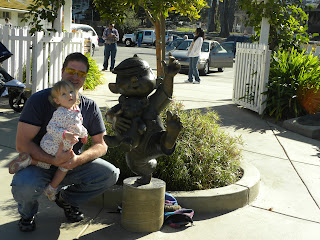 He heads out of the house to get to work at around 6, because finding parking around the brewery that he works at can be crazy and it can be hard to tell exactly how bad it's going to be so close to the university and fraternity houses on a Friday night.  He stands out in the cold and checks ID for hours.  After closing time they have to clean the place, which usually brings him to around 3 or 4 in the morning, depending on how well the football team did and how bad the mess made in the aftermath of the celebration was.

He pretty much repeats this on Saturday, getting up at around 9 after a few hours of sleep, and fitting in a full day before heading back out to work.  As often as not he finally gets home and gets to bed at around 4 am.

Now I know this next part may be hard for some people that haven't been around a child with our particular brand of special needs to understand, but Mae is particular about the Mass we go to.  We have one choice.  9 am.  9 am gives me about a 50% chance of things going smoothly.  And when she acts up at the 9 am Mass it's what I would call "moderate" (and what most parents would likely call "severe").

If we go to a later Mass it's like an hour of the worst experience of my entire life (slight exaggeration).  I have stood outside the cathedral while she screamed, an ear splitting sound, for an entire hour.  At any other Mass, when we walk in the door there is a 95% chance that she will scream the entire time while I sway and walk and hold her outside.  So if we're going to go, 9 am it is.

I guess I could begrudge Paul the sleep he gets on Sunday morning.  I could insist he get up and watch Patrick and Mae while I go to Mass with Sadie.  After all, he gets four-ish hours on plenty of other mornings... shouldn't he tough it out on 28 hours of sleep a week?  I try to let him get a solid eight hours on Sundays, but as often as not, he doesn't. 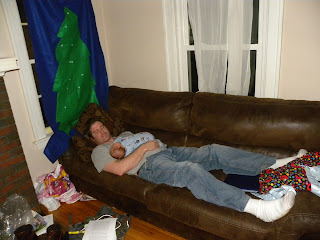 And so I have rejected the oft suggested "leave the kids with him and go by yourself."

You see, by Sunday morning he is so exhausted that he is virtually dead to the world.  I can (and have) stood next to him and shouted his name and he sleeps soundly through it.  On Sunday, the week of not sleeping while working and studying and going to school have finally caught up with him.  And if you know a little bit about Mae you can probably understand that the level of supervision she requires at all times is more than being sound asleep on the couch offers.

I've seen him try to stay awake in this state and have only learned that he can fall asleep while sitting up perfectly straight.  So, the answer to that question is a definite no.  After all, Maggie and Patrick are not appropriate baby sitters for each other by any stretch of the imagination.

Don't worry.  I'm not blowing off Mass altogether.  I do plan on going on those days when I'm not limping (a ruptured vertebrae at L5-S1 can make baby wrangling a bit tougher...), and when no one's having a "bad day."

To be honest, these days I don't drive anywhere with all three kids by myself because the logistics of getting Maggie and Patrick into their car seats make that pretty much impossible.  When you have someone bent on escaping and another child that has to be held until they're in their car seat, logistics that I'm certain other parents take for granted become a bit more tricky.  That's one reason that we generally walk everywhere (and because Paul usually has the car so he's not biking home in the ice at 2 in the morning).

I guess on those "bad days" I'll just be grateful that the Church herself has been a bit more understanding than many on this particular topic... and I'll allow her to guide me, thankful for the merciful understanding that sometimes caring for another makes fulfilling that very serious obligation an impossibility (yes, I know it's serious).

To answer that other question I receive on this topic:  Yes, my husband is Catholic and does go to Mass.  He's absolutely the person who brought me home to the Catholic Church.  He has a Master's in theology and is serious about his faith.  And he does go to Mass on Sundays... but it's a Mass (night time) that is absolutely an impossibility with two of our three (believe me, we've tried more than once).

So there you have it.  I know some people will say that it's a rationalization (I've already heard that this week!) and will believe that I'm absolutely wrong for occasionally admitting that every bone in my body hurts and that I just can't do it.  Some people will think that it can't possibly be that bad... and those people have likely never tried to take a child who's struggling with processing the world and communicating with even those closest to them, to a place where they're expected to be silent for rougly 90 minutes.

Deep down somewhere I hope that there is some virtue in discovering this weakness which has caused me to realize my own limitations and be grateful for the chance to see the world through this new lens of understanding.
Posted by Cammie Diane at 2:21 PM