Mae: An Update and a New Vest

I didn't expect this little sewing project to take quite as much time as it did.  If I'd been told it would take as much time as making three or four princess dresses I wouldn't have believed it.  But it ended up being quite the undertaking, although I couldn't be happier with the result and Mae loves it more than she's ever loved  princess dress... but first here's an explanation for why I made it.

The vest pictured below is a weighted vest.  It has about three pounds of rice in it.  It's comfy and squishy and because there's a strip of stretchy fabric in the back it feels like it's wrapping Mae in a hug.  When she sees it she quickly takes of whatever cardigan she's wearing (which is akin to removing her boots in that normally it just doesn't happen) and puts up her arms to put it on.  When she's had enough she comes over and lets us know she's ready to take it off.

She will likely get one when she starts OT too, but when that will happen is still up in the air.

One of these days we will get in to have an OT (occupational therapy) and ST (speech therapy) evaluation.  The autism center that it's supposed to be happening at was supposed to open in November (actually it was apparently supposed to open in July), but then the open date was moved back to January and now it's been pushed again to March.  The OT seems to be what everyone is worried about, because she really could have benefited from being in it like two months (or two years) ago...

I'm meeting with our case worker on Friday morning to talk about options (it's a typically busy week altogether with 3 meetings and 6 days of therapy), one of which is that her pediatrician has said she'll write a prescription for it if the center doesn't work out.  Every time I hear the words occupational and speech therapy though, they're accompanies by the words "waiting list" so I have no idea when the evaluations or subsequent therapies will actually happen.

So I made her a vest out of the fabric that was left over when Nani made her a dress: 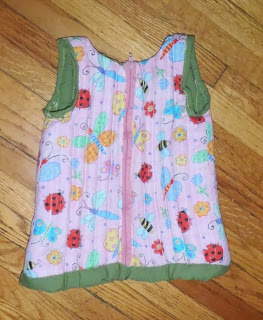 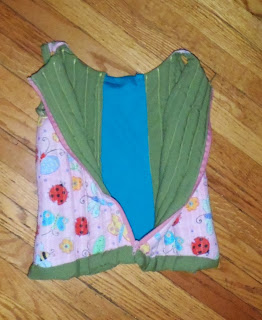 One of the therapist said she was certain that there were a lot of parents that would want to buy these (locally) but I'll have to figure out a way to seriously cut down production time if I'm going to consider it.  Because the 20 plus hours it took to make this definitely wouldn't work if it took that long to make every single vest.

Next on my list is a weighted blanket!  I have a feeling that won't take nearly as long to complete!