I wasn't going to do a Jesse Tree this year.  I just wasn't.  We've done it for the last two years and last year a certain some-bunny stole many of the ornaments, and I kept thinking I would find them somewhere, because they have to be here in the living room (don't they?!??!!?) but even after taking apart the couch to vacuum there are still missing ornaments.

A sane person would just sew up a few replacements.

Because apparently I like to torture myself with ever grander pre-Advent scheming.

You don't have time for this.  The thinking part of my brain argues.  You don't!  It shouts.

And then it's midnight and I'm sitting at the sewing machine watching Hulu  and suddenly I have a pile of felt growing in the corner.

"Are you making a Bible?"  Sadie says as she sees it.

Which I will take as a huge complement.  Because it's not from a kit, I just sort of cut it out and slapped it together... and it's making me feel pretty good about my sewing speed (that I'm actually getting faster after four(ish) years of sewing), because two years ago when I made the ornaments each one took hours and now I can easily whip one up in less than an hour.  And so here it is.  It is bigger, because each square is about eight inches across instead of three.

Here is the Jesse "Tree" that I'm not making (Oh, and it's not exactly a tree.  Because trees get climbed and pulled down in our house.  But I'll have more on exactly what my non-tree Jesse Tree is when it's done!): 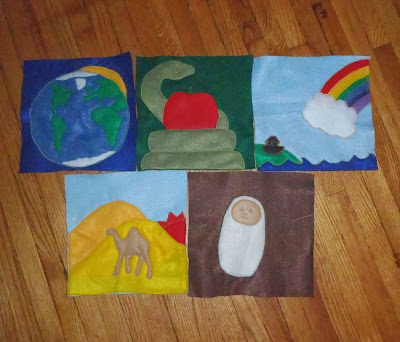 With the sneaky crafting part of my brain apparently in charge I'm sure there will be more posts on my progress soon!