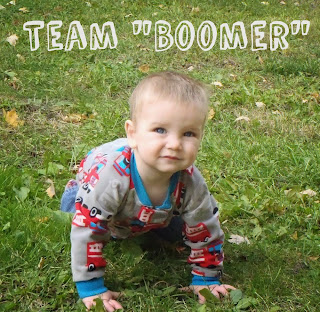 Two nights ago when Patrick woke up hungry at 4:30 in the morning I scooped him up and carried him into our room. He was still sleepy, his little eyes barely open and I hushed him as we walked past Maggie's room.  Just as we walked past the doorway his eyes snapped open and he began to holler:  "Aggie!!!!  Aggie!!!!  Agggggggggiiiiieeeeeeee!"

Apparently he had big plans for the early morning hours and they involved his big sister (and partner in crime) being wide awake.

Thankfully she was still soundly enough asleep that she didn't wake up.

In other news she said her first sibling name yesterday.  Of course it wasn't "Patrick" or "Sadie."  No, instead she waded into the Patrick nickname debate.

At the ripe old age of one year old tomorrow, Patrick has had quite a few nicknames.  There have been so many I can't remember them all but here are a few of the highlights.

When he was born Sadie called him "Pokey Boy."  When asked why she'd explain:  "He took so long to get here!  He's such a slow poke!"  That turned in to "Bippie Baby" for a while.  Then Daddy started calling him "Boomer" and Sadie thought that was a great name for a while and would say "Boom, boom, boom!   Boomer's always booming around the house!"

Sadie is usually the bestower of nicknames in our house.  She comes up with something for everyone.  She is the one who invented "Mae Bae" when she was two and couldn't say Maggie.  She's since switched to "Maggie" after watching a movie with a princess named Mae and deciding that she would like to pretend to be Princess Mae and Maggie could have her old nickname back (but Mae Bae stuck for everyone else!). 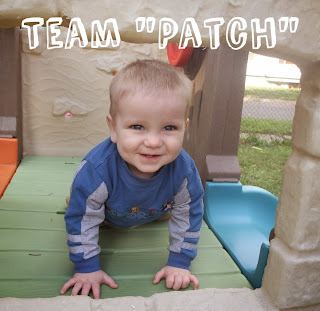 The next thing I knew Sadie and Daddy were debating nicknames with Daddy on Team Boomer and Sadie on Team Patch.  Of course she had to correct him and say "Patch!" any time he'd say Boomer and pretty soon he was doing the same thing back and saying "Boomer" whenever she said "Patch."  These debates involve a lot of laughing.

And so the struggle to give Patrick a nickname that lasts for more than a few weeks goes on and on.

I fall somewhere in the middle, using both names, but tending towards Patch more and more because it's what I constantly heard Sadie singing as she plays.

Yesterday Mae weighed in on the debate when she looked at Patrick and in a very serious, clear little voice said:  "Boom."

So there you have it.  The house is split down the middle!  Which nickname do you think better fits our little guy?
Posted by Cammie Diane at 8:01 AM