How the Feast of Saint Martin de Porres Changed my Life 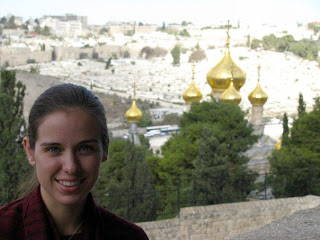 November 3rd has a way of sneaking up on me.  Last year it didn't.  Last year I obsessed over the day... wishing, hoping and praying that it would be Patrick's birthday.  The day before and then all day long on the feast of Saint Martin de Porres I hoped and hoped and hoped.

But we had no such luck.  Patrick was still five days away from joining our family on the outside.  A Saint Martin de Porres feast day baby wasn't to be.

To really understand my attachment to this feast day, you have to go back to November 3rd, 2007.

On that sunny autumn day I had life all mapped out.  Paul and I had been married for a little over a year and we'd been scrimping and saving. We had big plans.  In January we would be leaving on a backpacking trip around the world.  Two years of hiking and traveling and seeing all that we could see.  Before the trip, however, we were going to Israel on pilgrimage.

The night before we left we drove to the town that the airport was in.  I'd been sick for a couple weeks, with some nasty combination of the flu and a cold.  The cold was gone but I was still pretty sick and I just couldn't kick the bug.  We stopped at Target to pick up a few things for the trip and on impulse I bought a pregnancy test.

An hour later we drove back to the store and I bought five more.

They all instantly showed a dark positive line.  And in that moment we discovered that we were already parents.

Looking back it's funny how shocked I was.  Oh, we'd always talked about having a big family, but it was something that was always far off in the future, when all those other things that had seemed so important were completed.  We'd have babies after we traveled the world and came home and Paul went to graduate school.  He'd graduate and get a good job and a house and babies would naturally follow.

I'd kept trying to map it out, but it never really worked.  I was a list maker back then, in the days when I still had time to make lists.  If I realistically wrote down how long it would be before we'd be ready than kids were relegated to the far off distant future.  I'd shake my head and try to re-crunch the numbers.  It seemed unlikely that we'd have many kids if my math was right.  There was no way we'd be ready for at least another decade.  And my reasons?  They felt seriously serious.

And suddenly we were standing there, staring at a little row of tests, already parents.  There was a little life growing within me. (Paul would likely want me to write that he had suspected it for weeks... I was eight weeks pregnant when I took the test).

That trip to Israel was the sort of pilgrimage I've never imagined.  It was a challenging ten days.  Our waking hours were packed full as we were shuffled from site to site, walking in the places that Jesus had walked and taught and prayed.  And I was sick.  I was sick and hormonal and short tempered.  I almost punched a tour guide who tried to grab my arm and keep me from following our guide at the Church of the Nativity in Bethlehem.  I was exhausted but unable to sleep at night and was trying not to be sick on the bus during the days.  I only knew where we were about 25% of the time, because most of the time the chant going on in my head was "don't get sick, don't get sick, don't get sick.. I just want to lay down..." and those echoing thoughts droned everything out.

It was the experience of a lifetime, which I look back on far more fondly in retrospect.

Even then I didn't know how drastically life had really changed, nor did I suspect how wonderful this change, this new plan which God had in store for us, would be.

I was overwhelmed by the idea of a baby.  I'd never even changed a diaper.  So I did what I always do when met with a new challenge and began to read.  By the time Sadie came along I'd ever book and parenting magazine I could get my hands on.

Two years later I took another test on a brisk autumn day.  By then my point of view had shifted.  Baby's don't need much.  We had talked about it and he hoped that we would be able to take the blessings that God was sending our way as they came.  The test came back with two little lines.  Later I would glance at a calendar and realize that it happened to be November 3rd and it would occur to me that November 3rd was the day that we'd left to begin our journey to Israel and that this day and it's saint was pretty special to our growing family.

Which is how I became acquainted with Saint Martin de Porres and how he became our family's patron saint.

This morning I almost didn't make it to Mass. With all the last minute mini disasters conspiring against us I was nearly in tears by the time I managed to shuffle the kids out the door.  Yet we made it.  And I'm so grateful that we did.  Because today I feel especially grateful for all of the unexpected surprises that God has sent our way.  Today especially I can't help but realize that the plans that he has for our family are what my soul needs far more than any carefully plotted road map that I've come up with on my own.
Posted by Cammie Diane at 2:44 PM

Email ThisBlogThis!Share to TwitterShare to FacebookShare to Pinterest
Labels: About Us, Family Life