A new baby gate arrived for us across town at Lowe's and we drove over yesterday to pick it up.  This morning, after a long night of standing out in the freezing cold Paul put the gate together while Mae and Boomer watched in horror.  They were not pleased with this latest gate development.  But I was convinced it would help keep a certain one year old from storming his big sister's therapy sessions and attempting to become the center of attention.

Instead today he sat in his high chair in the living room today while I attempted to get him to drink out of a sippy cup (he was not having it) and yelled "Aggie! Aggie!  AGGIE!" about fifty times.

Now back to the room.

We found a big area rug when we were picking up the gate for $19.99 that I thought Mae might like (and that I hoped might make the downstairs feel a bit warmer because right now everything feels cold to me!) and I put it in the middle of the room that was formerly known as the dining room and which I now think of as the therapy room.

All three kids piled onto the rug like it was the greatest thing ever and spent the rest of the afternoon playing together on it.  It was definitely a hit.  I'm kind of tempted to pick up another one for the living room because it makes the floors feel less cold!

And now presenting the play/therapy room.  I'm really pleased with how it's come along... and as I look at these pictures I realize how spoiled (in a good way!) our kids have been by our loved ones because I think every single toy I can see was either a birthday or Christmas gift over the last five years! 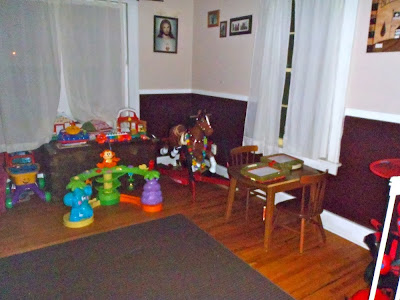 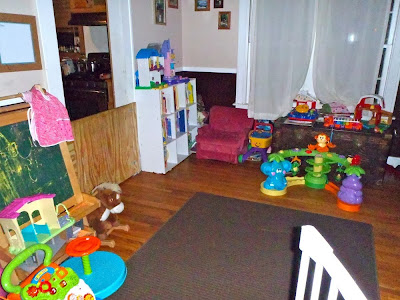 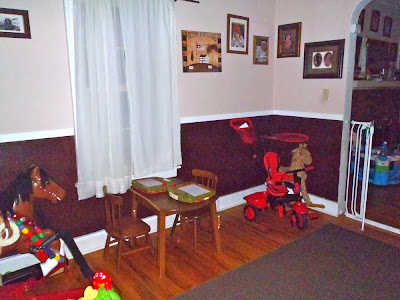 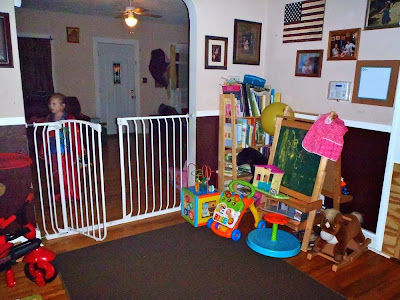