Yesterday my computer began to do the most horrible thing.  The entire screen started to flicker on and off and then a rainbow of brightly colored darts would shoot across the screen and then the screen would come back on for a second before turning grey and telling me to hold down the power button until it shut off.

It happened three times last night and I'm fairly certain that it means my computer is about five minutes away from dying.

So if there is a sudden silence on this blog just know it's likely because a) my four year old lap top is finally dead and b) Paul is laughing at my suggestion that I MUST borrow his computer because for some reason he doesn't seem to think that blogging/running an online business trumps two long grueling weeks of law school finals.

And I just know he'll roll his eyes if I question that particular set of priorities.

Another part of me is like:  "Look.  This is God's way of telling you that you get to give up the internet for Advent.  It's something that you would never ever (ever, ever, ever) do on your own, so he's helping you out."

While the other part of me screams:

Because there are few things that I hate more than that particular suggestion.

Every year at Lent someone makes it and I'm always joyful that I have the whole: "Sorry, I have an online business.  Me being online means heating the house and putting food on the table." excuse to not do it.

But really, the truth is, I've gone months in the past year without having a face to face conversation with an adult other than my gone-15-plus-hours-a-day-husband (with the exception of people taking my money at the grocery store and that sort of thing) and I'm pretty sure taking away the one line that leads out of the house that I have regular access to would not make me a calmer, more focused person.

But the computer has survived to Quick Take #3!  And that's something! 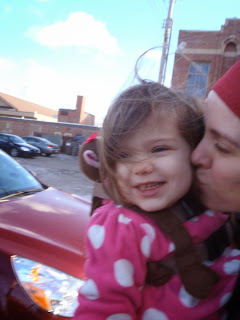 Yesterday, midway through therapy, after saying the words "I have a ball" and, "one, two, three, four, five" while counting objects, Mae heard me tell her therapist that I'd heard her counting in Spanish the previous day.

And she then made the switch and spent the rest of the therapy session speaking Spanish.

Now I have years of Spanish classes and years of working with guys that mostly (or only) spoke Spanish when I was in college, so I feel like I have an okay command of the language... and she was saying words that I didn't know.  I actually thought that she was just making words up until the her therapist looked it up online during the session and discovered that she was in fact actually saying real words.

That had me pretty baffled for the remainder of the day. because I know that I know 100% of the words on Dora and Diego, until I realized that we have a bunch of Spanish picture books that I got when Sadie was young and I was still super excited to try to teach a second language to my 0-month old... and while I've never read them with Maggie I suspect she may be reading them on her own.

It's like we learn something new about her every single day! 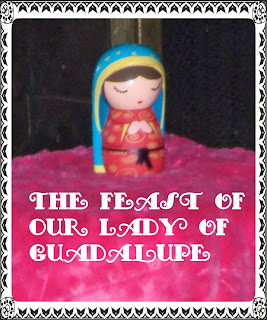 Yesterday afternoon Sadie and I watched Guadalupe: A Living Image on Amazon Prime and I was amazed at how glued to the TV she was as she kept asking questions about what was going on.

Honestly, if you haven't seen it, it's fascinating.  It talks about everything from the fact that the constellations on Mary's gown are those that would have been in the sky at that time (as seen from space including the position of the moon that she's standing on!), to the symbolism behind her hair and attire (her hair being down would have told the native people seeing the image that she was a virgin, the purple belt would have told them that she was pregnant, and the image of the particular four petaled flour on her gown would have let them know instantly that she was carrying God in her womb.), to the images of the people who were in the room when the tilma was unfolded that are reflected in her eyes.

There is actually much, much more to it even than that (from the Golden Ratio to musical notes within the image), and I can't recommend this documentary enough!

I need to get out my kitchen thermometer and measure the temperature in the living room.  Because I have the thermostat cranked up to a ridiculous temperature so that the kids who are bundled up in layers and under huge numbers of blankets, can sleep at night (think, above 70) but I know it is not even close to that in here.  I know this because I have been wearing a pair of fleece lined tights with a pair of stretch pants over them and a pair of flannel pants over that and many layers of long sleeves and I still walk around shivering.

I thought maybe it was just me and a very low tolerance for cold until I saw that both of the people who were here for therapy yesterday stayed in their jackets and one had a blanket across her lap, which had me rejoicing that it really isn't just me.  There's no way that thermostat is right.  I was out shoveling snow without a jacket when it was "feels like 0" a few days ago.  I'm just not that much of a wimp.

Patrick is apparently a toddler who likes his schedule.  He goes down for his nap every day at 9.  The other day Mae's therapy was starting later so I tried to delay his nap by half an hour so that they would still overlap as much as possible (so he wouldn't be clamoring to go into the play room to play with everybody).  Instead at 9 he walked over to the gate and stood there waiting to be taken upstairs to his crib.  I'm pretty sure he might be the easiest baby to care for in the history of the world:


For more Quick Takes, visit Conversion Diary!
Posted by Cammie Diane at 8:26 AM