I've been busy as a bee sewing (which is a very, very good thing!) but last night I took a quick break to get our little search parties ready for the morning: 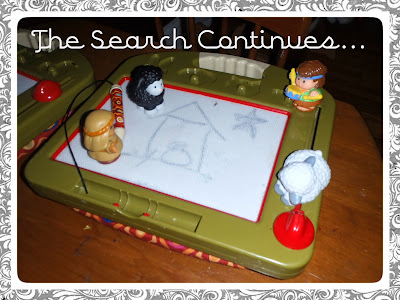 And as I had the online game tracker on, showing the plays and the score of the Ohio/Michigan State game I couldn't help but throw in a little bit of green during my advent preparations: 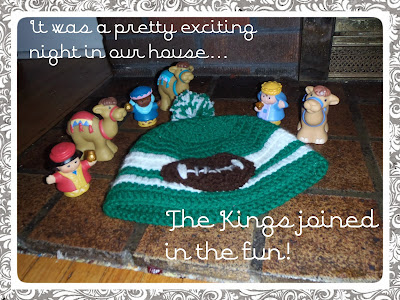 We were pretty excited about the results and the fact that Michigan State should now be headed to the Rose Bowl where they will likely be playing Grumpa's team (Stanford, which both of his parents attended).

And for some reason a question popped into my head that was tossed my way in the combox on a totally unrelated post about a year ago.  Someone asked why we were State fans when we'd just arrived here, likely because I kept posting enthusiastically (annoying?) pictures like this one:

Anyways, as the months have passed that question has popped into my head a few times and I've thought of writing a post answering the question, but I've held off because the reasons seem to keep piling up.

This afternoon, following last night's victory, which put Michigan State at the top of the Big Ten this year, as I watch the kids play and snuggled under a Spartan blanket, I thought I'd attempt an answer.

So here goes.  This is the answer to the question:  Why are you non-Michigan natives claiming to be State fans?

In the beginning I fell in love with Michigan State simply because Paul was accepted into the law school and he accepted the offer to come here.  I'd never been to Michigan when the letter caught up with us during Paul's summer internship in Calfornia, but it was already a place that I could actually imagine living.  You see one year in south western Florida, the land of perpetual summer, was more than enough for me.  I missed living in a world with seasons.  I missed the brilliant colors of autumn, the icy chill of winter, and most of all, I missed being able to walk outside in December at 7 am and not being instantly drenched in sweat.

Besides, leaving Florida felt like leaving behind one of the most terrible times of our lives.  The months that followed losing Christian and the events at the hospital there had tainted our time down south in a way that wasn't really fair to Florida. Still, fair or not I was eager to leave Naples behind.

And so Michigan, with it's pictures of State glowing in a mantle of fall colors, looked a little bit like heaven to me.


We hurriedly moved across the country (again) and Paul settled into school and enjoyed his classes.

I was 24 weeks pregnant when we arrived and I quickly began looking for a doctor.  We'd had several scares during Patrick's pregnancy that had me on edge and I was eager to find an OB.  After calling three offices and being told they couldn't take me I was pointed towards the university's office.  They would accept me as a patient and could get me in right away.

At that point I had no idea how grateful I would be to live so near the university in the coming year.

I didn't know that at the start of the 9th month of my pregnancy with Patrick I would be admitted to the hospital with a fever of 103, a resting heart rate of 150 and blood pressure that kept dropping to 70 over 40, struggling to breath and terrified.

Most of the some 20 doctors from obstetrics and infectious disease that were bustling in and out of my hospital room in the following days were from the university and I was incredibly grateful for the care that Patrick and I received that led to a healthy delivery a few weeks later.  After all, I was more than a little distrustful of hospitals and doctors when I'd arrived, and my experience this time around did much to erase those fears.

Most of the doctors coming in and out of my room while I was allowed a trial of labor after two c-sections were from State too.  And after Patrick was born his care was taken over by the university's pediatrics clinic. 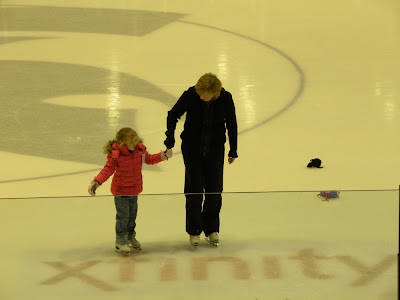 At that point Sadie was taking skating lessons in their hockey arena through the city recreation district and we were just beginning to appreciate all that living near the university had to offer.


As Patrick got bigger we began to visit Daddy's school for fun and field trips!


From seeing the bones of dinosaurs and mammoths at the museum to the bouncy ball display (they bounce up and down from the ceiling on strings!) in the modern art museum State definitely was at the center of many of my field trip plans.

We've sat and watched the marching band practice on our way back from walking to the law school to visit Daddy.  Sadie and Daddy used a Groupon to catch a hockey game together. 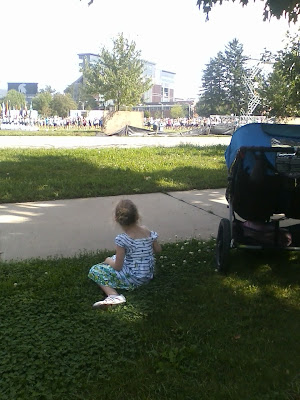 And one of Sadie's favorite places in the world is the school's fantastic botanical garden: 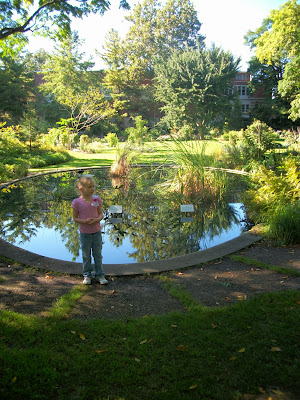 I think Maggie prefers the Children's Garden, with it's willow dragon that she can walk inside of: 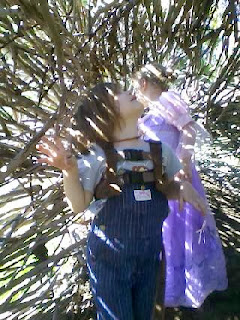 It's where we went trick or treating (which was great because I'd been walking around all day wondering what we were going to do since we had costumes and no where to go!): 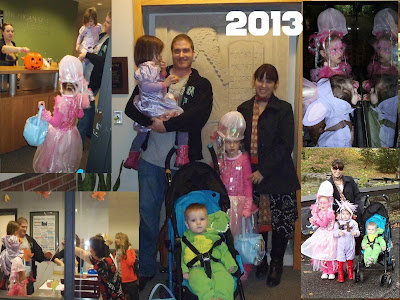 And it's given us educational opportunities that we definitely wouldn't have otherwise had, like student tickets to see a visiting Russian ballet present Cinderella, or a local company's performance of the Nutcracker: 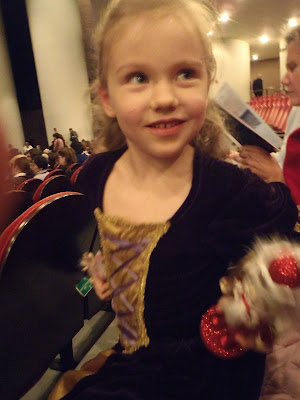 But all that leaves out the #1 reason that I'm thankful that we live right next to the university.  It's the reason that even if we move across the country and never live in Michigan again, I will remain a lifelong State fan.

It was a resident from the university's program that sat with Mae for nearly an hour, talking with me and interacting with her, and then very gently explaining that she was certain that Mae was on the spectrum.  She was the one who made phone calls and pointed me in the direction that I needed to be pointed in to get the ball rolling with testing (I still haven't heard back from the form that I filled on the Michigan state (government) website in June requesting testing). 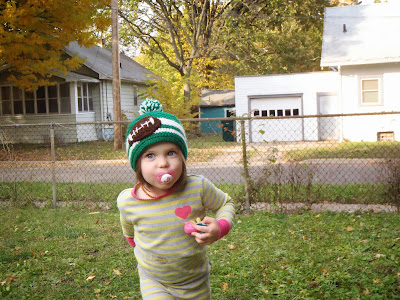 And when I was desperate to learn something and find some sort of program that would help me help Mae (especially when we were waiting for her paperwork to come through), it was on the school's psychology website that I found out about their autism lab, where Mae and I have been accepted into a study that is designed to teach parents to work with and teach their children.  We meet twice a week on Skype with a graduate student and talk about what I've learned and about how Mae  is doing and together we're designing a plan and goals for our interventions in the coming months. 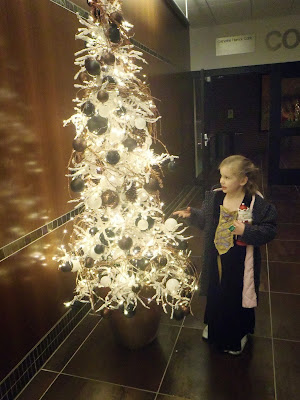 We've only been here for 17 months.  I don't have green and white running in my veins because my parents and grandparents were fans.  My own degree doesn't say Michigan anywhere on it (then again, my own alma mater gave up it's football team after my senior year).  But I still found myself staying up until midnight last night to see who was going to win the big game and smiling from ear to ear when the screen flashed that the game was over and that the final score had Michigan State on top (and then I worried briefly about how crazy Paul's work was likely to be in light of the news, before drifting off to sleep).

And that is my not so brief explanation to the question of why our family cheers for State... If that isn't a good enough reason, I don't know what is!
Posted by Cammie Diane at 2:52 PM