Today was amazing.  Paul went with us to Mass.  I asked him which kid he wanted to be responsible for and he took Patrick and put him in the carrier and I took Maggie and Sadie.  I was ready to stand in the narthex but when I saw that the back pew in the kid section was available (a couple of pews that are set slightly back from the other pews.  They also have a basket of kid books on them.) I headed over and thought we'd give sitting in a pew a try.

And she did it.  She was quiet the entire time.  She looked at the back of a golden book and was shocked that it wasn't the same as the back of her golden books because it had a few Sesame Street and Disney Characters thrown in.  The only time she spoke was when we were line for communion and she realized where we were going and threw her arms up in the air like she was going to cheer as she said:  "Yay!" in a sweet little sing song voice.

There was a sweet tiny baby in front of us and I saw her watching him and smiling and had to stop her once from going down to cuddle him, but other than that it was completely and blessedly uneventful.  I did catch her gazing at him a few times and smiling.

Can I say how much I love uneventful?

In other news the church looked stunning.  In addition to the advent colors (I'll stick with plural since there was that one rose candle!), the old crucifix was replaced this past week and the more modern resurrected corpus was placed in another part of the church (so you'll see it when you turn to leave).  The new crucifix is stunning.  It's quite possibly the most beautiful one I have ever seen.  It just transformed the front of the church.

And now, since this is a WIWS post, here's what I wore this Sunday.  I went with purple in my excitement to kick off advent: 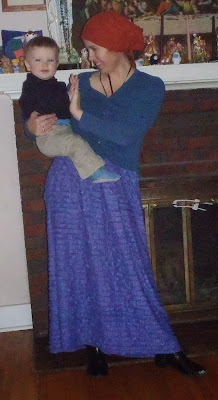 This kid.  Dressing him isn't the easiest part of my morning.  I think he's taking after his Dad in terms of proportions.  His shoulders and chest are in the 24 month-2T range.  His sleeper size is also in that range too.  But his waist?  If I want to keep his pants up without a belt (and a belt wouldn't work with most of the pants I have for him) I would need a 9-12 month waist.  Which is why I almost always put him in the one pair of pants that he has that are adjustable at the waist.

Today I put him in 12 month pants, which look like floods but stay on him, and kept his sleeper on under it because it's cold and because he hates socks and loves to take them (and his shoes) off and throw them (while hoping that I don't notice) so that all the little old ladies feel sorry for the poor baby who's out in December with bare feet.  So sleepers under his clothes it is: 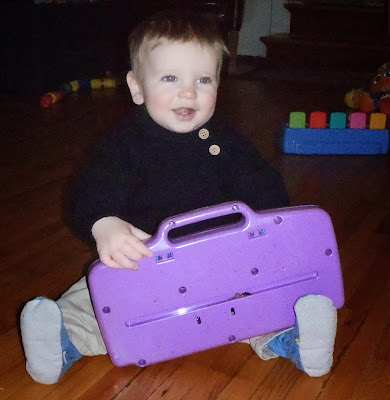 Mae was very, very happy with her new Thred Up sweater.  She was less happy about my attempts to snap a picture of it while she was busy working on her drawings.  She loves that board. 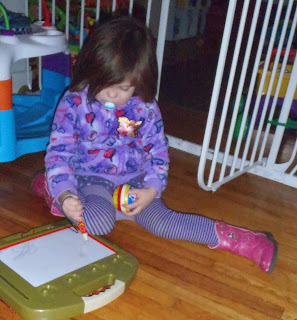 Lastly, here's Sadie in her fairy dress and her fairy jacket.

I'm pretty sure I don't like how she looks older and older in every single picture I take of her.

And could she slow down on the growing already?  At this rate it feels like she's going to be taller than me by her sixth birthday!

For more WIWS head over to FLAP!  I hope you had a great first Sunday of Advent!
Posted by Cammie Diane at 8:54 PM