For anyone who was curious about every single thing we did over Christmas (hi Mom!)... I made my very own photo album journal... so that we never forget "that Christmas when we were trapped in a hotel for (a yet to be determined) number of days:

We stopped by our house five times today to see if the electricity was on.  The arrival of power is slowly creeping towards our home from both sides.  "Look!"  I shouted as we rounded the corner.  "That house has lights!  Maybe our house will have lights!"  All of the blocks leading up to our house from the east and west have lights.  But there's a small cluster of houses still sitting in the dark and ours is one of them, or was as of 7 pm tonight.  I'm keeping my fingers crossed for tomorrow but... I'm trying not to get my hopes up.  Because outside it's still pretty cold (it snowed all day) and it still looks like this:

And while our house was 38 degrees on Christmas Eve when I snapped this picture, I'd be surprised if it was above freezing at this point.  On the upside, the turkeys and chickens I've been hoarding in my freezer are still frozen solid. Even the ice cubes are still frozen. So that's something. 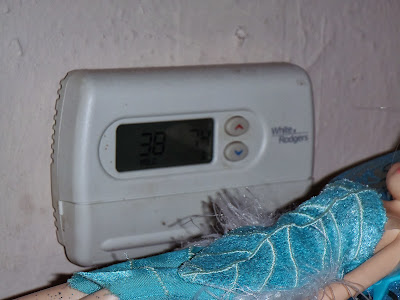 We actually thought about toughing it out and coming back to the house, power or no power, to have Christmas at home.  But then we did a test run yesterday and despite getting the fireplace up and running the day before, day 2 involved the house filling with smoke (it seems snow was now blocking the chimney, and by the time Paul got it fixed it was pretty miserable) and even when the fire was intolerably hot next to the fireplace, it was still freezing cold three feet away.

And since our little sensory seeking bunny isn't afraid of fire, she (and all the kids) were being kept safely on the other side of the baby gate with me while I read Little House on the Prairie, wondering all the while how on earth they survived (they were apparently way, way tougher than we are).  Still since the cold wasn't even budging a tiny bit, we ditched the dreams of coming home today:

Even with the cold Patrick was ready to play.  He let me know that he needed the yellow bouncy ball down and he got down to the very serious business of having fun.  Eventually his sisters, who were watching him, decided to join in: 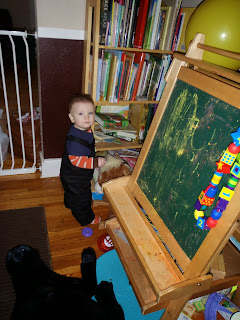 In fact it was so cold that I went out and bought a pair of pants on the way to the frozen house.  If you know me you know that that means that it was very, very, very cold.  It was fleece-tights-aren't-cutting-it cold.  So clearance jeans at Target it was.  And they were warmer while we trying to tough it out for a few hours.

Although Sadie told me I looked weird and not like a princess:

And here's my Thred Up dress that I had all picked out for Christmas Day.

Maggie is so cute when I get dressed up.  She kept handing me a pink dress to wear, and when I put it on she repeatedly hugged me.  When I changed out of it she spent a solid five minutes trying to convince me that satin-y pink fabric was what I needed to be wearing around the hotel room.

Then the real Christmas Eve excitement began.  There were signs all over our hotel when we returned from the house saying that Kay Jeweler's in the Eastwood Town Center would be handing out Teddy Bears to all the children in the hotel.  The Teddy Bears were from a Saint Jude's benefit and were really cuddly.  When we came downstairs there was a line of kids displaced by the storm and Santa began handing each on a stuffed animal.

Patrick and Sadie were excited, but Maggie's whole face was transformed into a huge smile.  She glowed as she grabbed her bear and hugged it against her chest.  And she fell asleep cuddled up next to him.

Then we came back to the room and after some convincing the kids finally fell asleep.

And then it was time for the work to begin.  I'd found tiny $4.99 Christmas trees on clearance at Meijer and had gotten a few ornaments for each of the kids and I set them up while Paul drove across town to rescue a few packages that had been delivered (according to the UPS notification I got) about five minutes after we left the house:

Meanwhile the babies dozed (andI was especially relieved that we go with the Saint Nicholas is a saint in heaven with God approach because with all the peeking Sadie was doing the gig would have been up last night...) while visions of sugar plums danced in their heads:


And then the presents that we'd hauled across town came out: 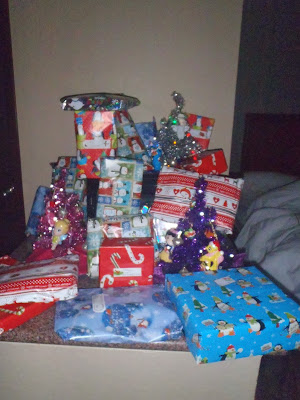 They were seriously, seriously spoiled by our friends and family: 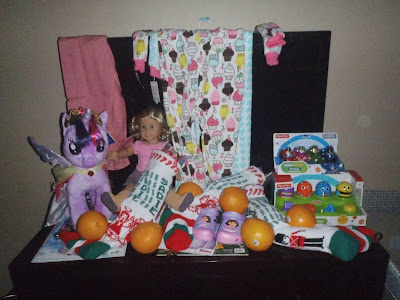 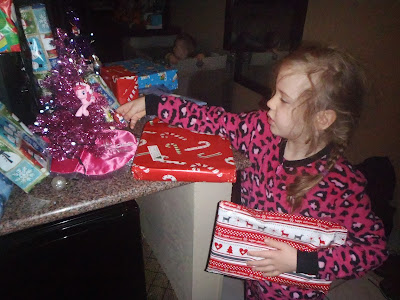 As expected, Maggie went straight for the Christmas tree bulbs.  I'd had a feeling she would love them in all their round sparkly-ness: 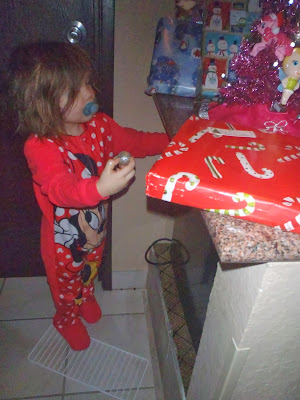 Maggie, who has been more than a little overwhelmed by this past week, retreated to a quiet corner with some of her play fruit (her favorite present): 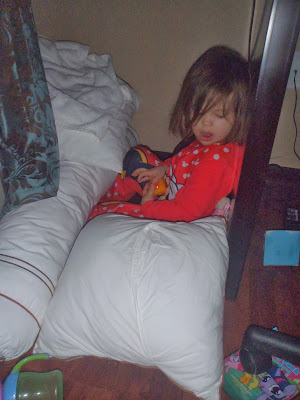 Sadie staged a ballet recital for her new friend "Kate": 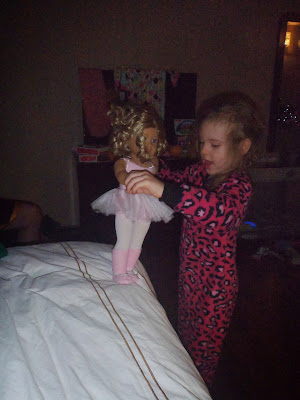 And Patch had a blast zooming cars around the wooden floors: 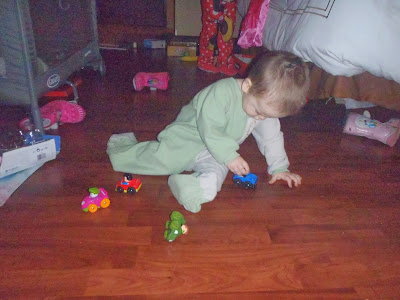 After a great deal of playing I managed to wrangle them into there Christmas outfits for breakfast downstairs and Mass: 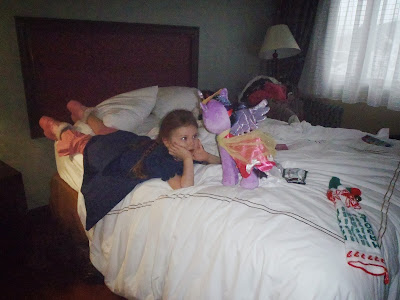 And somehow Paul and I got out of our pajamas too. 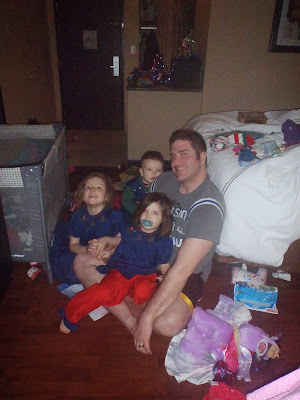 We had a quick breakfast in their little matching outfits: 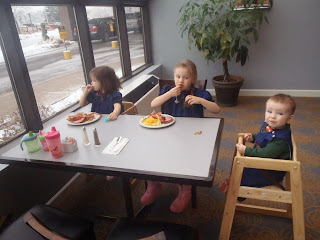 And made the long drive to our parish for Mass.

In the craziness of the last few days I never went online and checked Mass times.  I always check Mass times for Holy Days.  But not today.  I just assumed they'd be the same as Sunday... which was a bad assumption.  Let's just say that we made it about forty minutes of Mass... which means we missed about fifty minutes.

But with the way things were going (two kids struggling with allergies/reactions because somehow things have slipped through in the craziness of not having a kitchen all week, on top of the other stuff) there was no way we could have made it through the whole thing, so my scatter-brained-ness might not have been an entirely bad thing.


Oh and because this post isn't long enough, I have a story.

Maggie is apparently following in her sisters footsteps.  She wants the Eucharist.  She wants to receive badly.

The last few weeks this has become more and more apparent.  Last week her monkey leash kept her from rushing the altar.

Today she took advantage of me having just received to make her move.  After the last two weeks it's obvious that she's realized that's the best time to attempt to carry out her plans.  And so she did.

With all her little might she grabbed the chalice and thank goodness Father was paying attention and managed to stop her before I even moved an inch from the spot where I was rooted.


As we walked to the car Sadie said:  "I think that she wanted to tell Jesus, 'Happy Birthday!'"

Then there was time in the pool and a quick visit to the hot tub to warm up before we came upstairs to get ready for dinner.  Maggie loved the hot tub.  She must have said the word "bubbles" a hundred times.


And so a buffet it was.

We made one last run by the house (still dark) and came home to tuck the babies into their beds.

I hope this is our last night here.

At least yesterday I remembered to bring my phone charger along, so my phone is no longer dead!

I know it's silly but I especially missed my kitchen and being able to make good, healthy (and safe) food for everyone.  But it really can't be much longer now.  And we did have a wonderful day, despite the fact that it wasn't anything like I pictured when I was planning all those weeks ago.  Still I'm certain we'll be remembering with laughter for years to come.

I hope you all had a Merry Christmas!
Posted by Cammie Diane at 10:04 PM