I haven't written for a few days because I'm pretty sure that finals week (Part 2... Why can't it ever just be one week of finals in law school?!?!?!  Why is it always stretched out so close to Christmas?) is trying to kill me.  Paul leaves the house before 7 and gets home after 11 and when he is home, if he walks too close to a door Patrick starts sobbing because he doesn't want Daddy to leave again.

Tomorrow at noon it will be over, unless a lovely holiday killing email arrives from a professor, offering an extension on the paper that is due tomorrow.  Extensions, which are seemingly acts of kindness, have been the bane of my existence these past few (six) years because they can stretch a paper on forever and ever as it gets closer and closer to perfect but is never actually done until ten seconds before the actual time when it's due (that is only a slight exaggeration... ten minutes would probably be more accurate) .

As a result of the finals week stress and possible oxygen deprivation (more on that in a second), this post will likely be of the rambling sort that you all have come to expect now and then over here.

First off, it's snowing here in Michigan.

Coming from the mountains, where we not infrequently used a yard stick to measure snow, the half foot or so that we've gotten doesn't feel like all that much... until it's time to get in a car to go some where.  And that is when the difference between the mountains of Northern California and Michigan strike me the most.  Because in California it wasn't unusual to see plows out before a storm hit, waiting for the flurries to start.

After five days of snow in Michigan a plow finally meandered down our street.  Of course after five days of cars packing down the snow it didn't actually do much... but plow spotting is almost like a sport in our house now and so it was exciting all the same.

Here is an example of a Michigan street during the storm.  It was taken while driving down the main street by the campus.  And look!  While you can see that there should be a road, because there's a crossing light, you just can't actually see where the road should be: 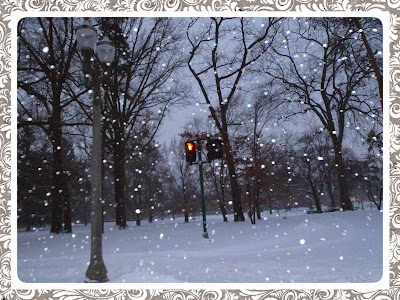 I am amazed at the drivers though, because I've seen plenty of sliding, spinning tires and no one seems to panic or crash, which is pretty impressive considering the general state of the roads. 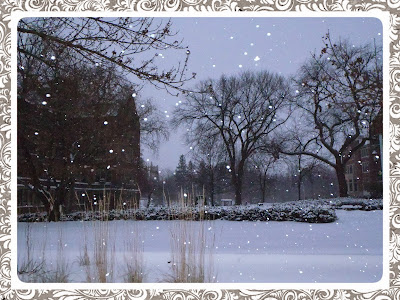 In 3 Kings news, the entire group of searchers was very, very excited at what they found in our icy little home on the 15th day of Advent: 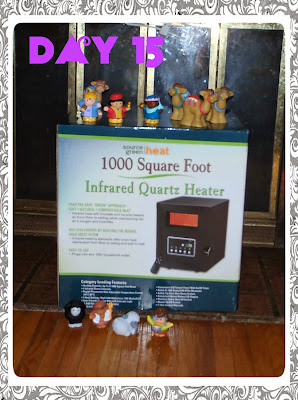 You see, I've been embarrassed to tell you all what our heater has been set at.  I had the thermostat cranked up to 75 (but just wait until you hear what the actual temperature was) and I've done everything I could think of and we were still shivering.  I hung a thick thermal curtain across the stairs and have a fabric door stopper that slides open and closed with the door and still it was cold.

I'd been bundling the kids in double layers and they were cuddled up in quilts, but Patrick was still waking up crying three times a night because his little hands were cold.  I would fleece lined tights, stretch pants and flannel pajama pants and I'd still be shivering.

A normal person might think that something was wrong with the thermostat, but my first thought was that we were just being wimpy.  We'd gone soft after a year in Florida.  We just needed to toughen up.  After all it was 75 degrees!

I finally broke down and got a space heater.  I noticed, set on the economy setting, that it kept going on to heat the living room to 68.  Now the living room is by far the warmest room in the house (and the thermostat was still reading 75).  So I finally dug out the thermometer after the heater had been running for a day.  It was ridiculously hot now and I was wearing short sleeves.

The main thermostat seemed stuck at 75.  And do you know what my high tech meat thermometer said?  64. I even stuck it in room temperature water that had been sitting out all day to be sure.

So 64 was hot.  I have no idea what cold was but I imagine it was pretty low.  And means Patrick's room was at least 10 degrees colder because it's naturally the coldest room in the house (good in summer..).

Now back to the search party: 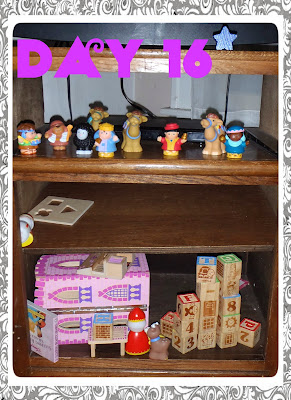 Sadie set this up for the babies and made a spot for the kings to rest and I just couldn't say no, so Day 16 was designed by Sadie!

In other heat/winter related news, last year a sales person at the gas company convinced me to pay $180 to get a company insured CO2 monitor.  The insurance meant that if there was a false alarm or problem the cost would be covered by the gas company.

The monitor has sat at 0 plugged into our outlet for almost a year now.  Today I came down and it was above 30.  I pressed "peak reading" and it said 59.  I wasn't sure what that meant so I called the gas company (it's back to 0 now) and they said they are sending someone out today to check out the house because the sudden change is worrying.

And that is the latest in our little snow bound house today.  Hopefully I'll have some CO2 related news soon!
Posted by Cammie Diane at 12:11 PM