The Latest Greatest News: Therapy Sessions with Mommy and Mae

Finals are over.  We survived!  I still have some last minute rushed sewing to do that I'll be picking up the moment that I finish this post, but right now I'm savoring the fact that all of Paul's finals and papers have been passed in and one semester is all that stands between us and graduation (and then a couple of months of insane studying for the bar).

While these past couple of weeks have been stressful, they've also been amazing and, as you may have guessed, a big part of that amazing-ness comes from this little bunny: 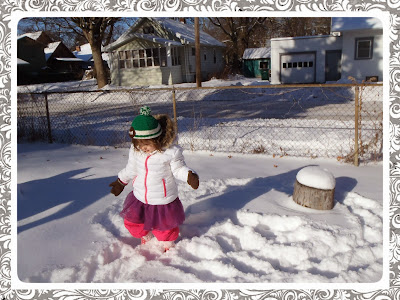 As many of you know when Mae first got her diagnosis back in September (was it really only September?  It feels like a lifetime ago!) I started searching for extra training beyond what reading everything I could get my hands on from the local library offered.  We came across the website for the autism lab in the psych department at Paul's University and after four testing sessions were accepted into their program.

The program trains me to understand more about how Mae communicates and teaches me how to communicate with her.  I meet with an adviser on Skype twice a week and have readings and slideshows and homework online.

Up until this past week the first few weeks were mostly in preparation for beginning the actual therapy.  This last week we finally began the actual practice sessions with me using the techniques in the program with Mae.  And it was absolutely and completely amazing. 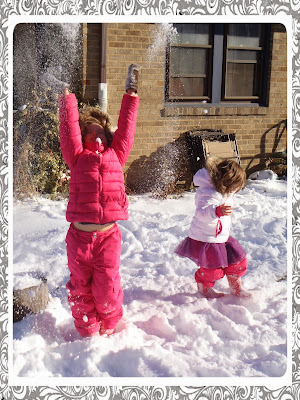 The first step in our sessions involved me imitating Mae.  Within a few moments of our playtime she realized what I was doing and started to act as silly as possible as she tried to see if I would do everything that she would do, exactly as she did it.  When I did she laughed hysterically and threw her arms around my neck and hugged me and stared into my eyes (!!!!).  And so our first session progressed in that way, playing for a minute and then hugging and then more playing, followed by more hugging.

The second day she tried to ignore me for a solid five minutes but then she realized that I wasn't stopping and that it was just too much fun and she decided to join in.

The third day she was furious about her binkie and the fact that I'd taken it away (because her therapist would be there soon) .  I decided to see if we could pull her out of her mood with a quick session and turned the tantrum into giggles by the time there was a knock at the door ten minutes later.

And since then it's been pretty smooth sailing.  She's decided that our sessions are really, really fun and she obviously looks forward to them.

Today we added in some verbal cues, which are part of the next step, and she continued to surprise all of us with her rapidly expanding vocabulary.  She's using words more and more frequently to communicate (I wake up to "Hello!  Hello!  Go away!", which means she's ready to come out of her room) and everyone, including her therapists, seem to be perpetually surprised by how fast she's learning.

One little example of her progress came the other day when one of Mae's therapists was going over the word cards that Mae uses with her.  One has a picture of a man climbing up a rope.  In the beginning the therapist would say "the man is going up" in an attempt to get her to say "up."  Then they would say "the man is going" and pause and wait for Mae to fill in the word.  The other day they held it up and said "up" to prompt her to say the word and she looked at them and, in her little sweetly correcting tone said, "going up" with the stress on the word going to let them know that that's what he was doing and that that's what they usually say.

In other news I'm doing little fun therapy sessions with a certain five year old so that she doesn't feel like she's missing out on all the fun that she sees her sister and I having:

Actually I've really noticed that it's changed how I'm interacting and communicating with all three kids in a way that they seem to think is pretty great.  And I have to say I didn't expect our sessions to be fun for me, but really truly they have been.  I've heard people working with Mae talk about how quickly time flies by and now that I'm in the mix I have to say that it's true! 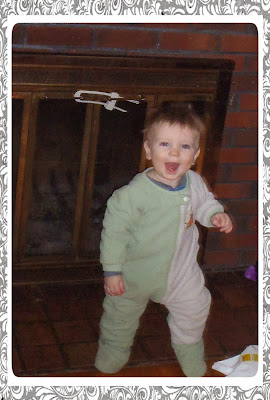 And over the break Paul is going to go through the program with me, which I'm really very excited about!

That's the latest in the whirlwind of the past four months!  I can hardly believe everything that's happened...

That is actually the post that I need to write when I'm not so incredibly sleepy (I was up until 1 doing homework last night!): how beginning this journey into understanding and communicating with Mae has transformed moments that would have once been completely mundane and ordinary into moments that are absolutely extraordinary.
Posted by Cammie Diane at 4:07 PM