The Destruction Outside our Door

So... this is our street as of today: 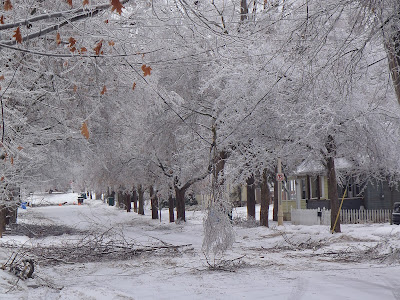 I'm not really super optimistic that the power is going to be coming on anytime soon.  These lines weren't the only ones down in a one block radius and if I turned to my right I could see two more groups of wire down, although they were certainly less dramatic without the branch dangling from them.  The news said that as of this morning 400 lines were down in Lansing, which explains why it was so easy to count around a dozen yesterday when we were driving around looking for a motel.  It feels like they're everywhere (now there are around a dozen within a couple blocks of our house).

I'm really, really, really hoping that we have power by Christmas... but at this point I'm not really optimistic.  In the last articles I read the power company wasn't giving estimates and the mayor said something about not expecting to have power to cook Christmas dinner and so... here we are.

It doesn't help that it keeps snowing and the temperatures have dipped again so the ice that's weighing everything down isn't melting.

I went to Meijer and bought three little Christmas trees for 40% off $4.99 and got each of the kids two ornaments and then stood in line for half an hour to buy them.  They'll be the decoration for our little room if the power isn't back on.  I'm pretty bummed because I've been so wrapped up in finishing orders that have come in that I'd put off making the kids presents (the little easy to sew saint dolls and soft saint books) until the 22nd (which was when I would have finished everything if the power hadn't gone off) and of course, I've gotten absolutely nothing done now that the power is off, since sewing in a room with Patrick and Mae is pretty much impossible. 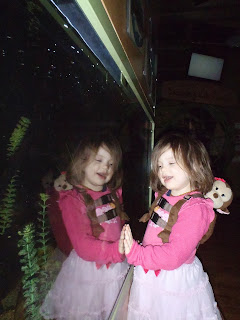 Can I tell you how important schedules are for our little bunny?  They are so, so very important.  And changes in our schedules?  They do not go over well.

Usually she does okay.  If she gets upset she can go into her room for ten minutes and usually even walking towards her room starts to calm her down.  But without her room, and with absolutely no personal space, she is definitely having a hard time.  And that means that all of us are having a hard time.

This whole autism thing is not for wimps... especially on days like today.

It's actually kind of funny (in a not all that funny way since she's having such a hard time) because I didn't realize how easy things had become until we landed in our current situation.  She's really made amazing strides, but the last few days have definitely shown me how delicate the balance is in this little system we've created.

Oh well.  At least there was plenty of giggling today.  We went to a museum so that they could run around and get their wiggles out.  And after 18 hours of being asleep (from 3 am this morning to 8 pm tonight) she finally went to sleep.

Now I'm just praying Patrick doesn't wake her back up... but I'm going to go to sleep now in case he does!

In other news, since I began writing this, one of the local power companies released estimates and they're saying that they think the people in our county without power will have power restored on Saturday... so it looks like it may be a full week without power at our house.  I'm really hoping that's not true...

It's certainly going to be a Christmas to remember!  I have a feeling it might be the kind we tell stories about for the rest of our lives...  "Remember that one Christmas when..."
Posted by Cammie Diane at 9:34 PM