Bridalplasty: Another Addition to the Upcoming Reality Train Wreck 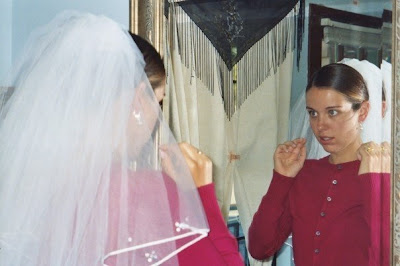 We have a TV, but we don't have cable or satellite TV (we do have a very old DVD player that has started having problems that make me think that it will need replacing before long...). And yet I find myself reading about the upcoming shows online (usually because a friend mentioned them on facebook or CAF) and writing about them here. Somehow hearing about some of the shows in next seasons lineup really does feel like driving past a traffic accident... where you want to look away... but you just can't seem to pull your eyes from the wreckage.
Earlier this week I talked about how television producers were sinking to a new low with TLC's new polygamy show, Sister Wives. Now E! has announced a new series that's disturbing in an entirely different way. "Bridalplasty" is a series in which women will compete in "wedding-related competitions."
And from the name of the show can you tell what each weeks winner will be awarded? Here's one description:

"Every week a group will go against one another in challenges like writing wedding vows and figuring out what they want to do for their honeymoon. A group of judges will determine who comes up with the best answer to each weeks challenge; the winner will receive a chance to have a plastic surgery operation that is on their “surgery wish list.”

The woman will receive the surgery before the end of each episode and the results will be shown at the start of the following episode. Each week someone is voted out in traditional reality show fashion until there is one winner at the end of the season."

""Viewers will witness his emotional and possibly shocked reaction as they stand at the altar and he lifts her veil to see her for the first time following her extreme plastic surgery," says E!, according to the Reporter."

Is it just me, or does TV programming seem to be getting more and more bizarre?
It's as if the people coming up with the ideas are trying to one-up one another in an attempt to see who can come up with the most shocking idea that will make it onto TV... How low can they go?
Posted by Cammie Diane at 11:48 PM