I know that most of my readers aren't in the same county as I am (or even the same state!) but for those that are I just had to write a quick post to encourage you to vote for Bruce Haney for Sheriff in the upcoming election! If you live here you probably already know how important this election is! We don't need a sheriff who says that there are "ways around the Constitution"! And we don't need a sheriff who "knows us well enough to know what's best for us!" (particularly in light of that earlier statement).
We do need a sheriff who is an honorable man who doesn't stoop to lying and mudslinging on a weekly basis.
We don't need a sheriff who finds half truths and twists them for his own means.
The opposition has made it clear that their attitude is Machiavellian: The end justifies the means. They want to win this election and the truth is only an inconvenience at best. 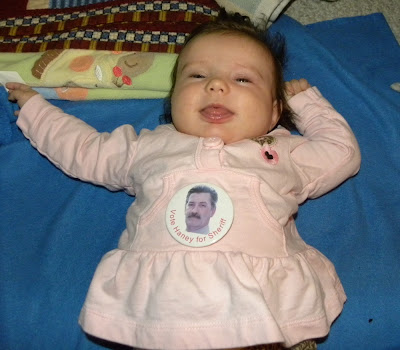 And that's why Maggie was wearing her Haney for Sheriff button this morning when we went to the VFW breakfast! 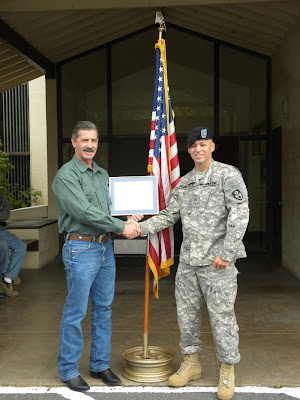 And here's my favorite picture from the morning: Bruce receiving an award from the National Guard for being a great employer who supports the guardsman who works for him.
Posted by Cammie Diane at 2:31 PM