The Trinity County Sheriff's Race: Why it's So Important 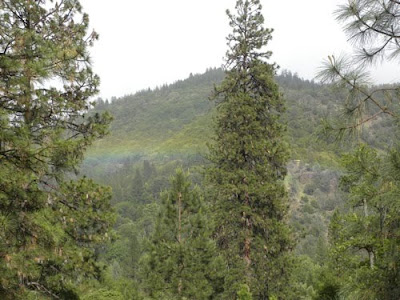 Sometimes a story really sticks with you. This one, which I read about in the local newspaper, and which I retell now from memory, was deeply disturbing.

I'll begin with a little background: Our county has a very serious drug problem. In this case I’m not referring to the rampant over-written prescription problem that exists. No, that is a far lesser problem when compared with the large scale marijuana production that goes on in a little, tragic corner of our county called "Trinity Pines." Trinity Pines is a large subdivision that is "off the grid."
At one point it was beautiful there. No longer. People have flocked from out of state (the license plates in the area are mostly Oregon, Washington and Florida) to work on pot plantations that have completely destroyed the land. Bulldozers and raw sewage abound. The structures are built without regulations, and deforestation (to make room for pot gardens) have left the land bare. When law enforcement officers show up gunshots ring out throughout the subdivision.
Unfortunately, many people moved to Trinity Pines before it became the toxically dangerous mess that it is today. People bought land to retire. They moved their to raise their families in a beautiful, pristine place. And not all of them have been able to afford to pack up and move, particularly now that Trinity Pines has become a cesspool (not good for land prices when you're trying to sell).
Now to the story that stands out so clearly, perhaps because it could really happen to anyone in this county.
A man returns home to find out from his wife that his neighbors, who are growers, have been firing their guns onto his property again. The wife managed to get the children quickly inside, where they've spent the day cowering in fear, hoping that the walls of the house keep them safe from the gun fire outside.
He goes next door. It's the last thing that he wants to do, but he must do something. He's called the sheriff dozens of times for the same complaint and they never come. Gun fire is low on their list of problems. Even if it is directed at small children.
Things go better than expected when he shows up at his neighbors house. He asks them not to shoot at his home. And he goes back to work on his own property.
A few hours later he's out working on his tractor when his neighbors step out of the trees, towards him, holding shotguns. The two that he sees right away climb up on the front of his tractor. He doesn't see the third until it's too late. The third man climbs up behind him and grabs him around the neck and begins to strangle him.
The hero of this story, a father, trying to make a living for his family and protect them, has long since learned to work with a rifle across his lap. He begins to fight back as the three men attack him, using the butt of his rifle to hit one of them. As he does the rifle fires, shooting the man behind him, whose fingers are still wrapped around his neck, in the shoulder.
That ends the fight. The other two are less bold now that their friend is on the ground bleeding. Our hero asks them if they'd like him to drive them into town to the hospital. They refuse, picking their friend up and disappearing into the forest.
Our hero goes back to his home and calls 911. He explains what happened. He tells them that he was attacked by three men with guns, three men who had been firing at his children all day, and that he shot one of them in the struggle.
Hours pass. He stays inside with his family. Finally, five hours later, the sheriff's deputies arrive, led by Mr. Dave Cox, who would like to be our brave new leader. They arrest the father, and confiscate all of his weapons (in a county with drug cartels, everyday growers, mountain lions, bears and coyotes, most people do have weapons). They let the other men, all of who have outstanding warrants on weapons charges in other counties, go. And then they leave the mother and her children, alone and unarmed.
Thankfully, they survived the terrifying days that followed, while Our Hero spent his days in a jail cell, waiting for bail to be set. Finally, weeks later, he was released, without being charged, despite Mr. Cox's best efforts.
The story of being held for weeks, or months, or even years (one man was held for two years without bail before finally being found innocent on all charges) isn't unusual in our county. Mr. Cox, who works for the investigator's office, is more concerned with getting convictions than with the truth.
And that may be the most frightening part of all of this...
Posted by Cammie Diane at 5:28 PM