Talk About Trusting Your Husband... 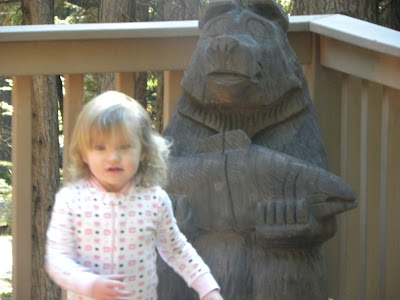 I've been meaning to get a hair cut for a while. It's been months really. And it was getting pretty long and tangly. But while I've meant to set up an appointment, I just never seem to get around to it.

I cut Paul's hair every month with clippers. And I trim Sadie's hair.

That's actually how tonight started out.

A little after 10pm I snuck in Sadie's room to trim her bangs. I've given up on growing them up at this point because nothing seems to keep them out of her eyes (I tried lots of suggestions, but nothing worked!) and she'd started walking around with her chin in the air so that she could squint ahead under her bangs. After turning her over and carefully arranging her hair several times (because she kept flipping over onto her side) I finally got them trimmed. However since she immediately rolled back over though, I'm not sure how great they look.

Then, in a fit of either confidence or insanity I decided to save myself twenty bucks and cut my own hair. I didn't mean for it to be quite as dramatic as it was. And maybe I shouldn't have been using the scissors from the knife rack (Paul called them "meat scissors"...). Within five minutes my hair was an uneven three inches shorter. I called Paul in.
I needed damage control.

Five or six inches (altogether) later my hair is still below my shoulder blades. And it's cut in a straight line across the back (yay! The layers have FINALLY grown out!). I tend to go in cycles where I decide I want layers, have my hair cut in layers, and then remember that I hate having my hair layered and pledge to grow it out again.
And we did save twenty dollars!

Talk about trust though! It takes quite a bit of trust to hand your husband a pair of scissors and say "have at it."

Thankfully, it worked out! Now I just hope I did as good a job on Sadie's bangs. Hopefully no one will come up to me in church on Sunday and ask if she "got a hold of the scissors..."
Posted by Cammie Diane at 2:26 AM

Email ThisBlogThis!Share to TwitterShare to FacebookShare to Pinterest
Labels: day to day, Living on a Little