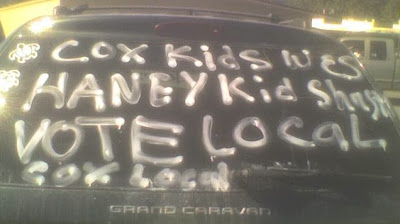 When you grow up in a small town, you usually understand pretty early on how small town politics and the small town gossip mill works. The scrutiny can be especially intense on children when a parent is in a position, or a potential position, of power.
As the daughter of a high school superintendent I saw this first hand and as I have watched this year's sheriff election unfold I can't help but sympathize with one of the candidates children.
In national politics even the paparazzi have seemed to have some sort of standards about the children of candidates and public officials. Sasha and Malia. Jenna and Barbara. Chelsea. They were off limits.
In a small town it doesn't work that way. Grown men and women see nothing wrong with slandering a young teenage girl that they've all watched grow up. The gossip mill is an easy way to spread "information" (or misinformation) about a candidate and try to turn public opinion in your favor (especially when your as desperate as these guys are!).
I've struggled these past few weeks with my view on Mud-Slinging. The Haney campaign has made it clear that they're running a clean campaign, on the merits of Bruce Haney and that they don't need to air the dirty laundry of the opposition in order to win (and from what I've heard in town, staying above the fray is working VERY well for them).
On the other hand, it's very hard to resist the temptation to write a long rant here about all the deeply disturbing things that have been going on in our beautiful little town. I personally know people who have been screamed at by the opposition candidate, for posting a Haney sign in their window or yard. Some have been so terrified that they've taken all of their signs down. Others are more determined than ever to show their support for the best man for the job. And then there are the stories of treatment that not just one, or two, but of many that have come forward to tell of their "treatment" by Mr. MudSlinger himself (and we're talking about stories by regular, hardworking people, who were never charged with any crime!).
But I digress. Bruce doesn't need any of us to sling the other candidates own dark truths back at him. He will win because he is the best man for the job and the vast majority of the people in this town know it (I'm predicting he takes 2/3 of the votes from talking to people in town!).
With all the mudslinging that has gone on, I have a feeling that Dave Cox is his own worst enemy. He might have had a chance if he'd realized before he began campaigning that bullying people doesn't usually equate to votes when the curtain closes on the voting booth.
Posted by Cammie Diane at 10:48 PM