What Would Sadie Do if... 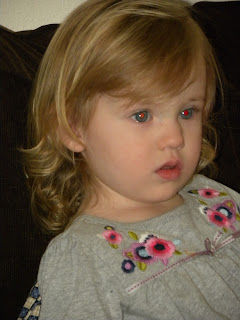 We live in an area with a lot of wild animals. Since we've moved here we've had run ins with mountain lions, bears, coyotes, foxes, and rattle snakes (when I was pregnant with Sadie I had a small rattle snake slither up on the porch right behind me when I was putting on my shoes!), along with the deer and jack rabbits that hang out on the back lawn at Nani and Grumpa's most of the time. And I've always kind of wondered what Sadie would do if she were close to any of these animals (the rattle snakes coming up on the porch worried me the most, but we haven't had any in the last two summers).

Today we found out what Sadie would do if she came face to face with a deer. It's bow hunting season right now, so we have an even higher percentage of deer hanging out in town lately (a huge buck walked across the freeway in front of us a couple of days ago when we were walking in the evening).
After our morning walk today we took Sadie to a meadow in the middle of town and let her run around while Maggie slept in the stroller. Paul and Sadie raced to an apple tree on the opposite side of the meadow from where I stayed with Maggie. They were standing by the apple tree when a doe bounded into the middle of the meadow, directly between us, and stopped. Paul and Sadie turned and saw the deer and Sadie's face lit up. And then she made her move. She took off at a sprint, running straight at the deer. The deer saw her, froze for a split second and then bounded over a white picket fence and out of the meadow.
So Sadie hasn't quite gotten the point of all of our "wild animal" talks yet...
Posted by Cammie Diane at 1:20 AM