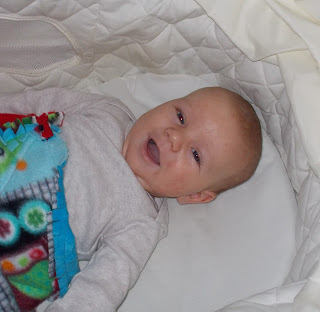 So in the midst of my worry about the probably peanut allergy I forgot about the part of the doctor's appointment when I found myself staring at Patrick and thinking, "what on earth are you doing?" as the doctor examined him.

Patrick has fairly good neck control at this point.  It's not perfect, and I still need to have my hand lightly on the back of his head for those sudden two month old floppy moments, but he can certainly lift his head and look around.

The medical student came in and checked him and said he had good neck control.  He smiled and gargled and cooed and flirted when she was in the room.  Then came the time for the doctor's exam... and Patrick turned into a limp noodle.  The doctor tried to pull him up into a sitting position and he just flopped his little head back.  He picked him up and Patrick flopped his head to the side, his entire body totally relaxed.  He turned him over and Patrick let his little head flop forward.

Internally I was thinking:  "What on earth are you doing Patrick?  Why are you floppified?" (that last word is from Curious George when he tries to boil things to "floppify" them).

As the doctor talked to me about tummy time and how we'll have to reevaluate his neck control next time because he looks as if he has a delay... and does he ever lift his head (yes, yes he does...), Patrick, now back in my arms, lifted his little head and sat in my arms looking around.  What a little pill bug.

As my mom pointed out, I'm glad I'm not a first time parent, because the suggestion that he "has a delay" would have had me in a panic, rather than cause me to kiss his nose for being such a silly little noodle. 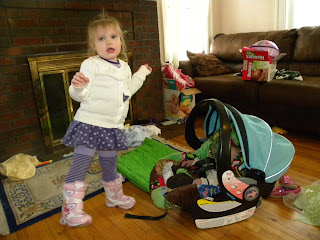 Mae Bae has never been a big talker.  I know that she can talk, because I heard entire conversations between her and "meo bear" (Oatmeal Bear) in her room during nap time over the baby monitor, in which she'd use real words and lecture him like he was either the best or the naughtiest bear in the world.

But our little introvert has always made a great effort not to have to talk around the rest of us, apart from using single words in ever increasing frequency (finally).  I've never been too worried about it.  I know that she can say the words because I've heard them over the monitor and I've heard them when she chooses to show off her ever increasing vocabulary.  And I know she knows the words because she'll give me her impish little smile, bring over this big Spanish picture dictionary that we have and point to the pictures (or, more often, take my finger and put it on the picture) of the word she wants to communicate.

In the last couple weeks, however, the words are finally starting to overflow out of her little mouth and she has a favorite word, said with the same mischievous little smile we've all come to recognize.  It's a handy word that her sister also loves that she uses when I say things like:

And her favorite response, learned I'm certain, from her big sister who loves to use it?

I find I can relate to so many of the meme's on grammarly... especially this one: 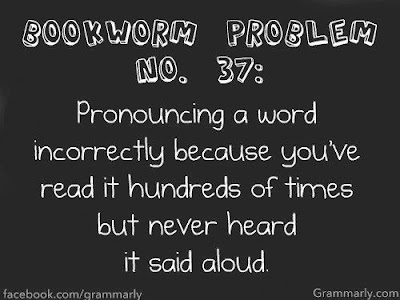 When I showed it to Paul he agreed that this certainly is a problem with me and then added:

"But then you argue with me about how your pronunciation is still right!"

Yesterday while I was giving Patrick a bath in the sink Mae Bae jumped the baby fence (realizing, I'm sure, that my hands were occupied) and headed down the basement.  Sadie asked for permission to open the baby gate and get Mae Bae.  I said, "yes, please!" and she opened the gate, walked over, grabbed her sister's hand, lead her back over to the gate and through it, and closed the baby gate behind them.

I have to say, I'm a little bit shocked by the ease with which she did all of that... when I thwart Mae Bae's plans of basement adventuring there's nearly always a tantrum.  When her sister did it, there wasn't even a peep! 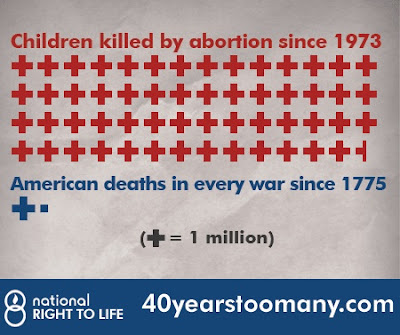 Everybody has been getting haircuts lately.  I've been cutting everyone's hair since before Mae Bae was born, which Paul and I figured has saved us at least four hundred dollars over the past three years (especially since Paul's hair grows and poofs out so quickly and he desperately needs monthly cuts).  The girls hair cuts are much less frequent, but it was definitely time for a trim.  Here are the after pictures:

Now for a day of rearranging rooms.  There's been a crib blocking our upstairs hallways for two weeks now that I have to move to squeeze past and today that ends.  Because furniture moving is the one thing I can't do on my own...

For more Quick Takes, visit Conversion Diary!
Posted by Cammie Diane at 11:09 AM