Patrick's Baptism (with lots of pictures!)

Today was the day I'd been impatiently awaiting for:  Patrick's baptism.  His Godparents drove seven hours to make the trip to be here for his big day (they're friends from our time in Florida who made the move north too!) and we spent yesterday visiting and having fun and watching our little one's run wild (Sadie is currently lamenting their drive home).

This morning I was a bit nervous.  In our little group of four grown ups we have five rowdy babies between the ages of 4 and 0 (okay, after watching them play I'd say they have two sweet girls and we have two wild hooligans!).  We were all wondering yesterday about how the baby wrangling was going to go when we were solidly outnumbered and trying to get Patrick baptized.  I found myself hoping that no one would attempt to lay siege to the altar (or tabernacle...) when our hands were full .

As I dressed Patrick in his outfit for Mass I also hoped that he would fit into his three month sized baptismal gown... because if he didn't he would have been wearing this:


Here he is in his big boy baptismal gown.  It was a squeeze.  The back of the gown itself was left unbuttoned to the third button... but the real challenge was getting his arms into the jacket.  It was a tight fit... and he wasn't thrilled about being woken up to change: 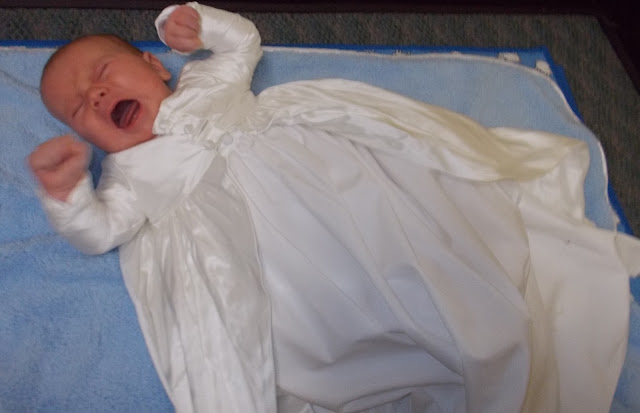 The baptism was beautiful.  I felt myself resisting getting teary several times!  I'd never been to a Tridentine Rite Baptism before.  It was so lovely!

Did you know they use blessed salt in the old rite baptisms?  I didn't.  And I believe that was Patrick's favorite part of the whole thing!  He was awake long enough to lick his little lips and taste the salt before sleeping through the rest of the baptism.

I also didn't realize that the color of the stole changed from purple to white midway through the ceremony: 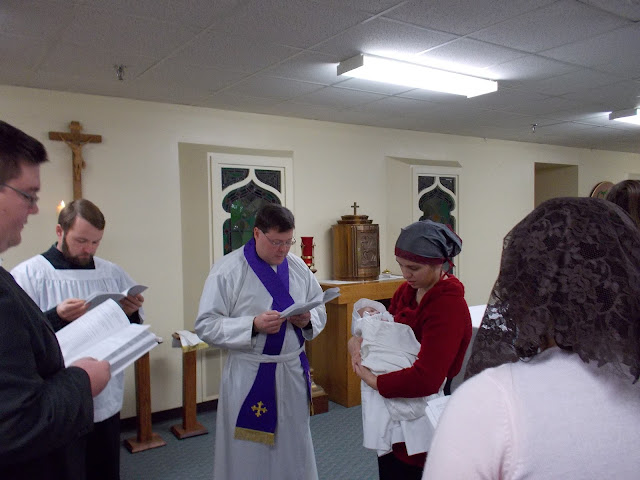 At this point it was interesting enough that even Sadie came over to watch: 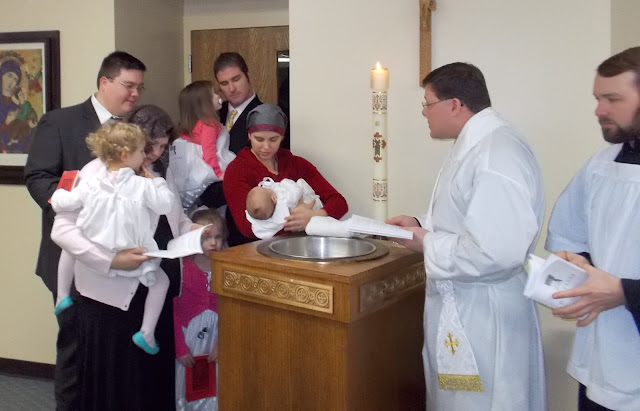 And here's the big moment!  I love this picture!  I could stare at it all day: 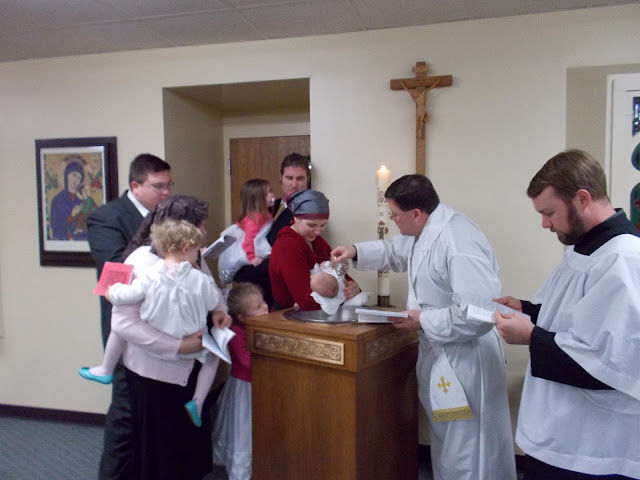 And here we are as a group (Patrick's godparents also have a little girl who's just out of the picture. She's six months old and is such a doll!): 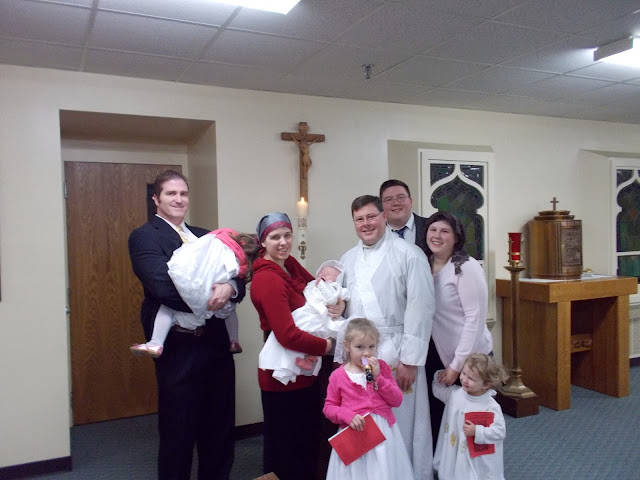 I love the embroidery on Patrick's baptismal gown's slip... 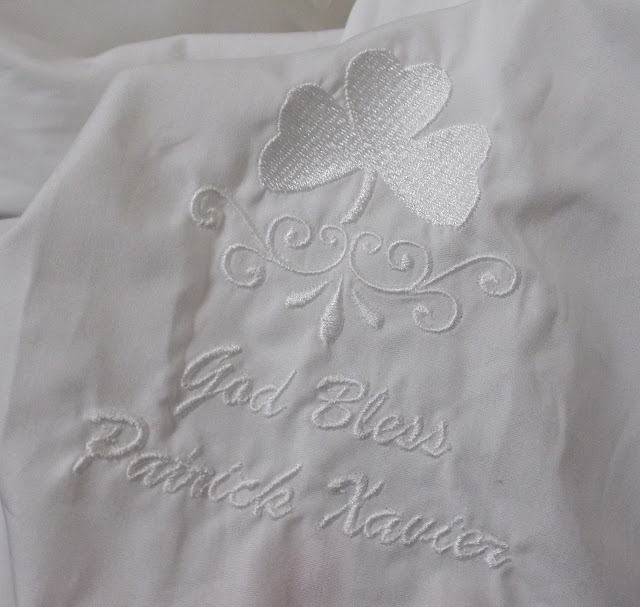 And here's the whole outfit.  He's pretty certain that he can't bend his arms much in the jacket: 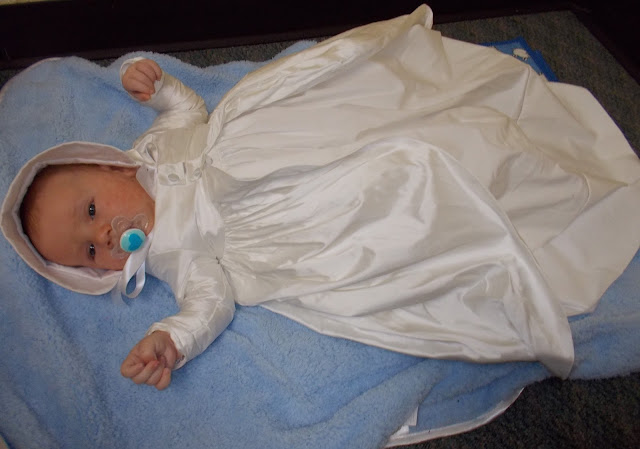 Here's what his peaceful little face looked like throughout the baptism: 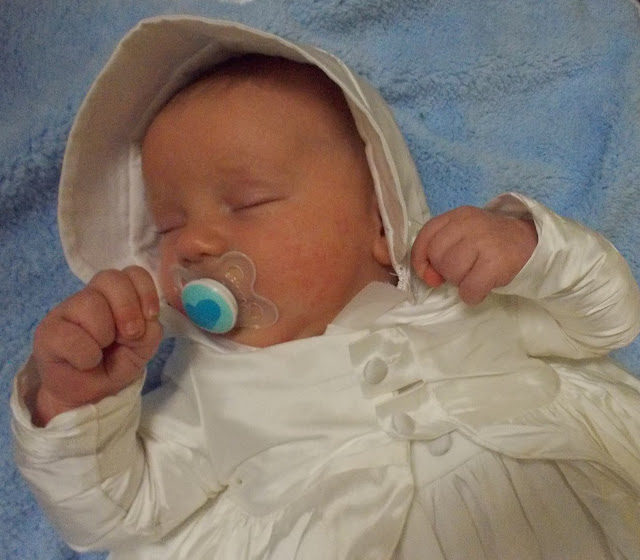 He looked a little thoughtful afterwards (he's probably grateful I took the jacket off!): 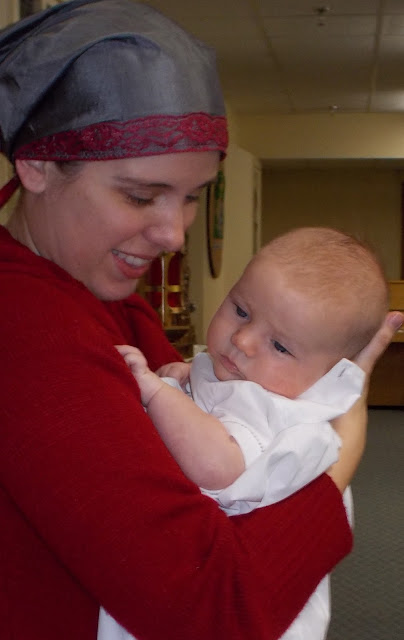 He was not, however, thrilled about taking off his gown.  It was another change that was not part of his plan for the day: 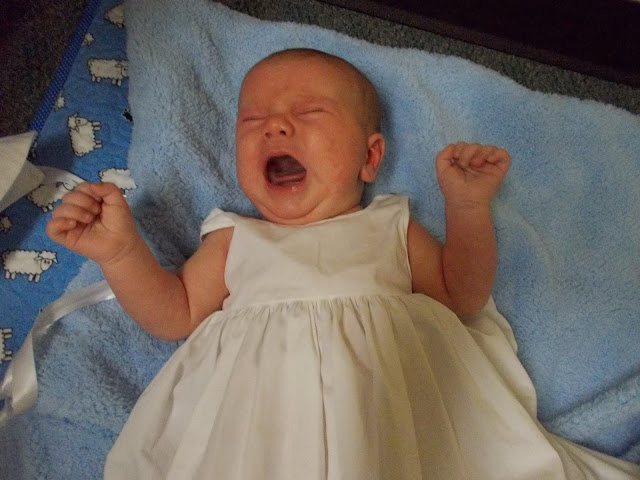 We had lunch with his wonderful godparents before they were headed south on the road and then we headed home where I attempted to snap pictures of the girls, who also got dressed up for their brother's big day (I did spot Sadie trying to stick out her tongue to receive the Eucharist again... it's just so hard to wait!).  However my photo efforts were almost a complete fail.

Here's Sadie, who even decided to wear her veil for the big day... although she was a little silly about the baptism.  She asked me before we left if she could carry flowers since she was wearing her flower girl dress.  When I pointed out that baptisms don't have flower girls she informed me that Patrick would in fact be wearing a white dress, as if this won the argument about whether or not her flower girl services would be needed: 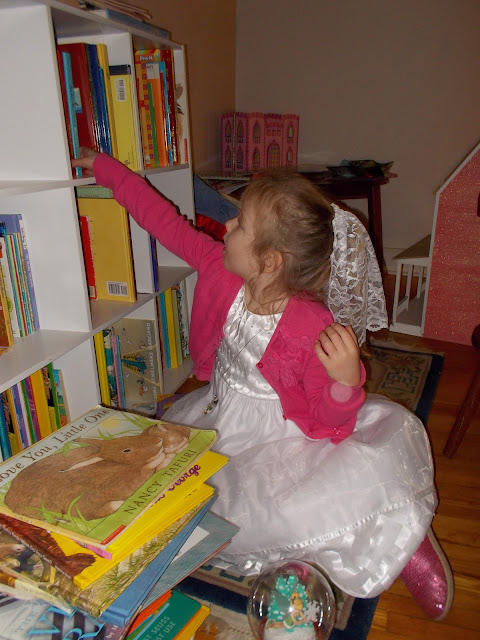 Even Mae Bae got dressed up, complete with sparkly tights: 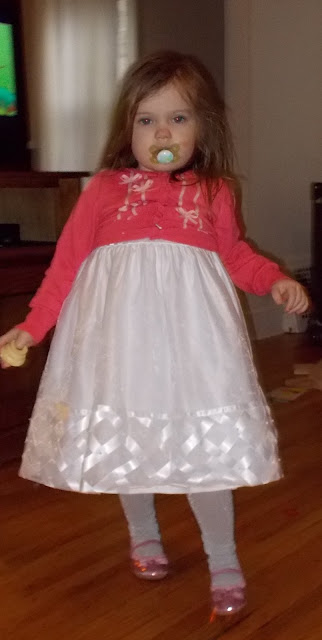 And of course I tried to get a picture with both my girls while Patrick was napping after we got home... and the picture was a major fail: 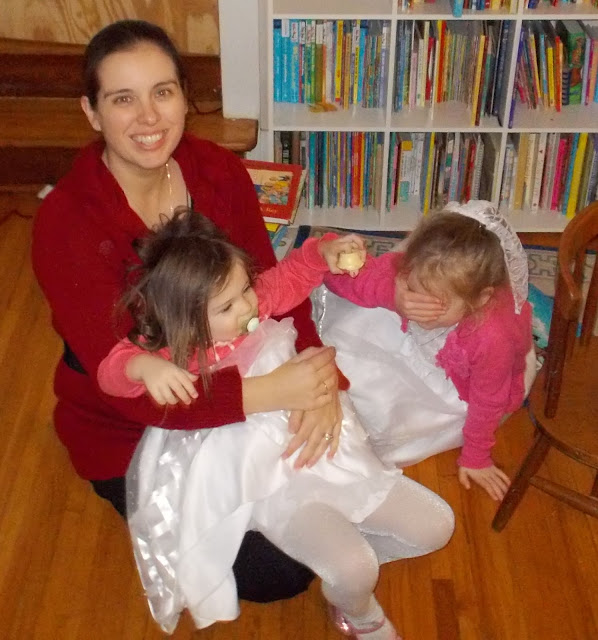 One of these days I'll get a picture in which everyone in my family is looking at the camera and at least attempting to smile... it just may have to involve photo shop...

All in all it was a beautiful day for a baptism!
Posted by Cammie Diane at 4:50 PM