Blogging time has been scarce these last few days as we traveled back and forth across the country, visiting with family in the middle of the long, pleasant drives.

Surprisingly, everyone in our family seems to like going on long drives.  I'm not quite sure how this happened.  Paul and I both love driving across the country and the kids have somehow inherited this love, which to me seems astounding at times, since they're two and four and should be asking "are we there yet?" over and over again, rather than peering out the sometimes steamy windows and asking "what state are we in now? Is this New York?  Is this Michigan?"

I think their attitude might just be the result of our shared love of driving (since Mommy and Daddy are having fun this must be fun!), or at least I imagine that's what it is, because nothing else really makes sense.  It's not as if either of our children are naturally good at holding still for long periods of time when they're out of their car seats.

I brought work that needed to be done, but realized early on that my magnetic strip of sewing needles had fallen out of my bag and that the sewing machine needles for the sewing machine we were hauling along with us weren't going to do me any good.  So instead I worked on my new project, some beautiful single decade chaplets I'll be adding to the shop soon, and as I worked the hours flew by.

On our way east we drove from 8-something until 7-something, when we landed in Weedsport, New York for the night.  The eleven hours were broken up with a stop for lunch in Ohio, which was eaten in the car, a stop for about fifteen minutes at a rest stop in Pennsylvania, and a break for dinner in a snowy town in New York, with sandwiches eaten again in the car.  We'd planned on going late into the night while the babies slept, and making it all the way to Massachusetts, but when the wiper motor on the car gave out (costing a little under $300 to fix) it was time to stop for the night and hope that the road was clear in the morning so that we could make it all the way to the coast without having to find a mechanic.  The fact that our car's defroster fan has never worked contributed to the "where'd the road go" problem that meant an early diversion from our plans.


In the morning the road was clear and we made it the rest of the way without wiper blades or a working defroster, stopping only once to eat in the car at a stop on the New York Turnpike, before hurrying across Massachusetts and marveling at the fact that Patrick slept the entire 8 hours.

In Massachusetts Sadie and Mae and Patrick got to meet family they'd never seen before.  Sadie had been out once and met her older cousins and uncles and aunts, but Mae and Patrick had never been to Massachusetts.  And the number of cousins had grown from four to eight in the past three and a half years, so there was lots of running and playing and failed attempts at getting a single picture in which everyone was smiling.

On our way home we stopped at Plymouth rock to take a picture and my new, not quite two week old camera broke when my finger barely brushed the front of the closed lens when the lens was opening and we realized after trying to get it to start back up that the "lens error" was permanent (thankfully I bought the warranty). 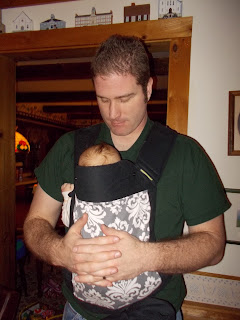 Then it was back on the road.  The first day we drove from 1 in the afternoon until 10 at night with one stop for dinner (again in the car... unloading the three of them in snow only to pile back in didn't seem all that appealing to anyone).  We spent the night in North East Pennsylvania where snow was falling when we found a motel and hurried three sleepy babies inside.

In the morning we left at around 8 and made it home a little after 2 pm, for a six hour drive (it only took us 15 hours in the more pleasant weather to make the trip home!).  For the last hour in the car Mae fused about a hole in the knee of her pants that had been tiny when we left Pennsylvania, but that was huge by the time we made it home.  And that was pretty much the extent of the fussing during the entire 34 hours in the car, during which time they played with books and a handful of toys they'd brought in their backpacks, but mostly watched the landscape go by out the window.

It feels good, after all that driving, to be home and to be getting back into our routine.  This morning we're rearranging the rooms with Paul and I moving into the girls room, Patrick (or at least his crib and dresser) moving into our room and the girls moving into the sewing room... and now I need to run... because there's lots of moving things around to do!
Posted by Cammie Diane at 9:26 AM