Patrick's Two Month Check Up: The Good and the Bad... 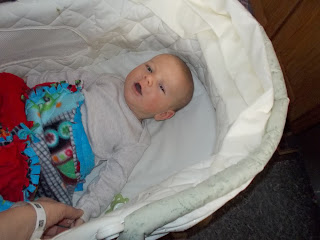 I'll start with the good news...

Patrick had his two month appointment today and has continued to follow in the footsteps of his big sisters by being a big baby.

His poor little toe decided to turn a lovely shade of purple that I'm incredibly thankful I didn't notice until we were at the office and in the doctor's presence, so that I didn't make myself sick worrying about it's bruised color and whether or not blood was getting past the clearly visible line where the hair cut into his skin.

Then it was time to talk about the issue that's been worrying me this past week... allergies.  There's a suspicion that began to take root a little over a week ago when Patrick was nursing and suddenly broke out in hives.  His little face was pouffy and red and I found myself wracking my brain trying to think of allergy causes.  Was it milk?  I don't drink a lot of milk but on most days I drink one glass with dinner or lunch. But this seemed so sudden.  Still I decided to cut back on dairy for a few days and see what happened.

Unfortunately it happened again... and this time the culprit was rather clear.  I'd had an apple as a snack earlier in the day and being ever mindful of eating enough protein, had spread a layer of peanut butter over each half.  My mind went back a few days and I realized I'd done the same thing on that other day when the hives had also appeared.  And I don't eat a lot of peanut butter...

The hives reappeared, in lessening amounts, for the next couple of days.

I explained this to the doctor, who'd already had one of the medical students question us about allergies in the family...  confirming we have a history of bad reactions...  I'm very allergic to penicillin and sulfa.    The girls are both allergic to fragrances (scented soaps or fabric softeners) and there was Sadie's incident with flame retardants that lead to a horrible reaction that caused me to carry antihistamines in my purse for a month or two, until the car seat covers proved that they worked (I guess I'll be doing that again...). And Paul and I both have asthma, which is apparently a risk factor for children with peanut allergies.

After listening the doctor nodded and said the words I'd been hoping he wouldn't say... that it sounds to him like a peanut allergy and that with the other allergies in the family he's certainly at risk.  He said he couldn't say for sure at this point but it seems very likely (I'd been willing him to say something like:  "Oh that's crazy!  Baby's don't have peanut allergies when they're that little!  We never see that!  It's got to be something else!").

I don't think my face showed the internal freak out that was going on as I remembered working at summer camps and being showed out to use an epi-pen and hoping that I never, ever had to imitate the demonstration I'd just seen.  I haven't yet begun googling peanut allergies, but I'm still a) desperately hoping there's something else that he's allergic too and the peanut butter was just a coincidence or clinging to the hope that b) peanuts are perhaps one of those wacky allergies that some babies grow out of (after writing that last sentence I couldn't take it any more and googled and found this... and it doesn't make me feel any better.  at all.).

In fact, the more I've read since finishing the last paragraph, the more I worry... because according to each article, severe peanut allergies usually become evident in the first year of life.

Deep breath as I step away from google.  I'll be praying this is just a weird coincidence... as I empty my house of peanut products.

This should certainly make any candy eating temptations easier to avoid, since most of my favorite candies have warnings about peanuts on them...
Posted by Cammie Diane at 7:30 PM