Patrick and Yesterday's Surprise Trip to the Doctor's Office

While I'm mostly devoting my little journal blog to my daily rambling on Patrick's allergies, I thought I'd give you guys an update after yesterdays scare.  I've pretty much cut back my diet to meat, fruit and veggies.  Each time I try to add anything else in, hives erupt and we have tummy problems and a fussy screaming baby.

While there's no way I could ever do this diet to lose weight, I've managed to stick to it 100% by picturing Patrick's little swollen face and thinking of what will happen if I cheat.  It's a major deterrent.

It's also kind of strange because for the first time in years I find myself struggling to get enough calories (I'm finally getting the hang of it).  My daily goal is 2000 calories, and since this started all of five days ago I've lost three inches around my waist (things you notice when you know your measurements from sewing).  Which is one of the things that spurred on yesterdays gone wrong experiment of coconut oil, because I'm on the lookout for new ways to add fat to my diet (I've eaten a pack of bacon every single day...).

I put a tablespoon of coconut oil in hot water and added an herbal tea (since plain tea has been okay) and drank it.  12 grams of fat!  I rejoiced.  And it tasted good!

An hour later I nursed Patrick and his little face broke out in terrible hives.  His little cheeks looked puffy.  He screamed for half an hour (and Patrick pretty much sleeps and wakes up and babbles and smiles all the time... he's a pretty laid back little guy).  Then he fell asleep and his breathing sounded like mine during an asthma attack.

I called the doctor and Paul rushed home from class.  We took the car and arrived about four hours after Patrick had started to get sick.  He was looking better (and his breathing was normal)... although still not quite like himself: 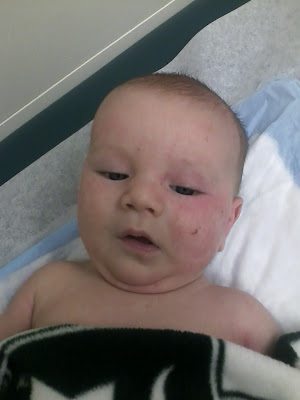 The way things work at our doctor's office is the med student comes in first and goes over everything and then he briefs the doctor on what's going on and what we should do (it's actually really interesting).

The word "unusual" was used by the doctor about a dozen times over the course of the appointment.  It's unusual to see this so young.  It's unusual how many foods seem to be triggering it right now.  It's unusual for a baby to have hives.

He agreed that I should stay on the strict diet and said that if this continues they are going to want to send me to a nutritionist. And they wrote Patrick a referral for a allergist (I believe the allergist will probably be in the office.. because they have pretty much every type of doctor in the office... even an oncologist).  So now I'm waiting for a phone call to make the next appointment, where they said they'll probably do the skin prick test on his little back.

So that's the latest.

On a happier note, Patrick pushed himself up on his elbows and knees yesterday.  He was shocked.  He spent the next fifteen minutes trying to do it over again, but couldn't figure out how.  He's also very into stuffed animals at the moment:

Now to wait for results and pray that his allergies aren't as extensive as they seem and that it's just his little tummy being sad from all the antibiotics I was on (he is on probiotics now).

If you've made it this far thanks for listening to my ramblings.  Hopefully I'll have good Patrick news soon!
Posted by Cammie Diane at 9:31 AM