Have you noticed a seemingly sudden shift in the dialogue about family size in the US?

In the last month I've found myself coming across quite a few articles that put aside the previous lamentations on "overpopulation" and that are now discussing how we've fallen below the replacement rate and worrying over the possibility that the population will soon begin to decline.  An editor of one major magazine that I was reading even stated that he and his wife had "done their part" by having two children (and I found myself thinking, "what a change!").

The realization that you need more people coming along to pay for the people on Social Security and to care for the aging population finally seems to be making it's way into the discussion.  This article suggested one scenario if current trends continue:


"According to a 2008 IIASA report, if the world stabilizes at a total fertility rate of 1.5—where Europe is today—then by 2200 the global population will fall to half of what it is today. By 2300, it’ll barely scratch 1 billion. (The authors of the report tell me that in the years since the initial publication, some details have changed—Europe’s population is falling faster than was previously anticipated, while Africa’s birthrate is declining more slowly—but the overall outlook is the same.) Extend the trend line, and within a few dozen generations you’re talking about a global population small enough to fit in a nursing home."  Read the entire article here.

Although it seems really impossible to predict long term how this trend will continue (the worry of extinction that's brought up in the article seemed a bit out there, because it seems probable to me that behavior would change if the population really plummeted to the levels discussed) it is nice to see a change in the dialogue that's been going on these past years!

We survived the first week of the second semester of the second year of law school.  We're past the halfway point.  And I've got my eyes fixed on summer.

Just kidding (I'm trying my best not to obsess over summer...).

Paul's schedule is pretty horrendous on Monday and Wednesday, put he does have Friday's off, which means Friday morning is errand day before he disappears back to the library.  And that means I can at least get my shopping done without braving the grocery store on my own with my three little helpers.

Patrick's baptism is this Sunday and I have to say I'm a little nervous about fitting him into his baptismal gown which is the 3 month size.  At least it's a gown.  It just has to fit across his chubby little shoulders and we're good.

I'm also excited to witness my first Tridentine Baptism.  And since our Latin Mass community holds Mass at the Cathedral (although in the crypt) it's at the Cathedral, which I'm excited about too!

And of course I can't wait for him to be baptized!  Paul was so busy with finals that it kept getting pushed back, which made me so nervous!

I got Paul hooked on Doctor Who over the break, which means he's still taking a few hours a week (late at night) to watch a couple episodes with me while I work.  This is awesome because I a) get to see him and b) have someone in the house to laugh with me about the various meme's I find on this facebook fan page: 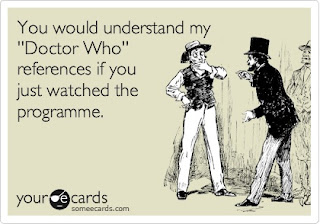 Reorganizing the upstairs is going along very, very slowly.  I have to move the crib back and forth to get through the hallway right now... and I'm hoping that changes today.

Mae has reached that stage in toddlerhood where she is perpetually disheveled.  She no longer tolerates having anything in her hair and even when it's just been washed (which isn't a fun job, let me tell you) it seems to instantly attract something fun like... peanut butter. 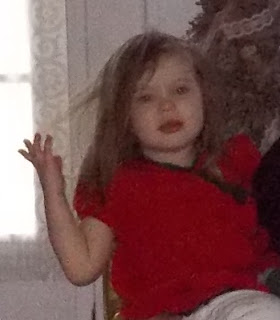 I sometimes feel like my children are in a competition to see who can take the most late night trips to the ER.

Yesterday Mae Bae made another toddler attempt at visiting (is it because they heard me telling the family about how nice the Pediatric ER is here and how it's full of touch screen computers with games?  Because I didn't think they were listening, but then Sadie suggested visiting in an excited way when she got some minor ouchie...).  Mae had spent a good portion of the day climbing up on chairs and then (purposefully?) tipping them over.  Apparently in her book crashing to the ground is fun. 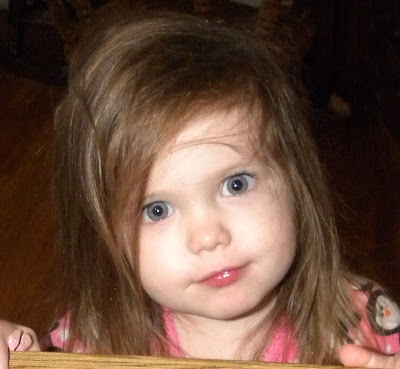 Last night she was sitting in her chair finishing her dinner.  She's the slowest eater in the family by far, and I had taken Patrick over to the couch since he had begun announcing midway through dinner that he was dying of starvation (I think it's the smell of food that makes babies perpetually hungry when their families are sitting down to a meal, even if they've just been fed).  Paul was bringing the dishes to the sink and Sadie was flitting around him, enjoying the fact that the baby gate was open... and suddenly I saw Mae (in what felt like slow motion, although I knew there was now way I'd get there in time), lift her legs up, put her feet on the table ("nooooooooooooooooo") and give a good hard push backwards.  The booster seat she was strapped to didn't seem to deter her from playing another round of tip the chair.

Thankfully, her guardian angel seems to be used to working over time and she didn't even seem to have a bump on the back of her head (although that didn't stop me from freaking out for a solid ten minutes trying to look at her eyes while she stubbornly closed them and acted like I was torturing her.

Now to go get my errands done!  There's a lot to fit in this morning!

For more Quick Takes, visit Conversion Diary!
Posted by Cammie Diane at 10:02 AM