It's been rather cold around here lately, especially for a family who, only last year, lived in a climate where the weather people referred to 50-something degrees as "mitten weather."  While we never really adjusted to the hot humidity of Florida I do sometimes think it's making this winter feel a bit colder than it would have if we'd gone straight from Northern California (where yes, it does regularly make it's way below freezing if you're in certain areas) to Michigan.

Yesterday I checked the forecast when we woke up and saw a predicted high of 11 and a low of 5 with a current temperature of -4 degrees.  Brrrrr.  The temperature made its way above zero some time in the afternoon.  Barely.

So we've been home bound, with only Paul heading out into the cold for school (and even he decided to forego his normal morning bike ride to school and took the car).  In fact, it was so cold that after school he took the car to the mechanic to get the defroster fan fixed, because our car hasn't had a working fan in the front since we bought it (sometimes, in the beginning, it would turn itself on and off, and the fan in the very, very back works) and while we struggled through 90 degrees and 1000% humidity (only a slight exaggeration) in Florida without an air conditioner, long trips through the ice convinced us that a defroster might be a handy thing to have in a car in Michigan. 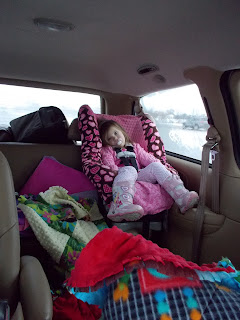 I have to say, I'm kind of proud of our old beat up van (who goes by the name Cabrini, since she's the patron saint of machines not breaking, or something like that, and Sadie heard the name and thought it would be perfect for our van).  When it limped out of the used car lot with over 100,000 miles on it and the window rolled down and wouldn't roll back up on the way home, I was a little nervous.  But having put over 30,000 miles on it this year, with only a few minor repairs (the ignition needed to be rekeyed, the power steering was repaired and the windshield wiper motor went out) I'm pretty impressed.  How many beat up old vans could make it from Florida to California, then California to Michigan, then Michigan to Florida, then Florida back to Michigan, followed by round trip drives from Michigan to Montana and back, and Michigan to Massachusetts.

I was also pretty excited that the cost of the repairs was roughly half what we'd been quoted in Massachusetts.  We'd had a feeling it would work out that way since the cost of living is significantly less here, but it was still a relief to hear!

Today we're looking at a relatively warm day with a high of 17.  That's downright balmy.  I might not have to wear my snuggie...  I have to admit though, I'm still smitten with the seasons!

Now for a few pictures from the past few days: