The Start of New Diet: Day One 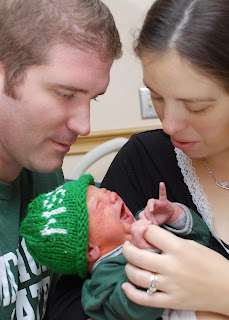 First of all, thank you all for all of the advice and information!  It has been a big start as I've begun to figure out how to proceed today.

Today is the day...  I'm starting the elimination diet and then gradually reintroducing various possible allergens to see how Patrick handles them.

And here are a few more details on why we (the pediatrician and I) think this is a food allergy and not a skin allergy, which, I'll admit I desperately wish it was (the girls and I all have pretty severe skin allergies to any sort of fragrance and in Sadie's case there was the whole flame retardant debacle that sent her to the ER).

The reason is this: when Patrick nurses, a portion of the time, his little face turns red.  And then hives start to appear all over him.  And he starts to swell up until his whole little face looks puffy.  Nursing, with the exception of his hives yesterday while I had the peanut butter out, is the only time he's had the reaction... hence my concern.

It's the swelling part that really had me worried.  I'm used to hives from skin reactions.  The swelling part?  Not so much.  He also seems to be getting sick and spitting up a lot more, and since he previously didn't really spit up at all, it has me wondering if it's related too. 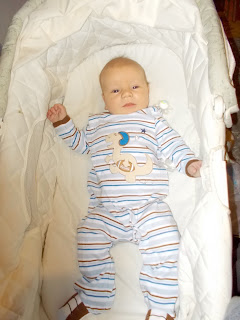 I am planning on adding white vinegar back into our laundry routine to see if that helps, but other than that there aren't really any fragranced anythings that touch his skin (I do put some scentless Burt's Bees baby lotion and Aveeno Baby Lotion on him, but his reactions have never coincided with their application).

I do want to look more into the whole probiotics thing for both of us, since I was on such heavy duty antibiotics during the pregnancy and during the delivery and because he was taking antibiotics last week after the whole toe incident.

As for yesterdays non-nursing rash it happened in a way that made (and continues to make) me very nervous...  He was asleep in his basinet, rash and swelling free.  I made the girls sandwiches.  The girls ate their sandwiches in a separate room from Patrick.  I cleaned up the kitchen and I washed my hands.  Patrick started to cry and I put a binkie in his mouth.  My hand touched his cheek.  I continued cleaning and looked over and noticed his face rapidly becoming covered in hives and swelling up.... and I reached for the cortizone...  Which is why, at this point, it's just not worth it to me to have peanut-anything in the house.  I'm hoping that if we completely avoid it now it may go away or not develop into something severe at this point... That also happens to be where my quest to find any other allergens comes from.  His reaction is fairly mild at this point and I'm hoping if we identify and eliminate the triggers it will stay that way and (I'm praying) go away.

And I kind of wonder about when he was born: he had a horrible, horrible rash.  The doctors called in "newborn rash" but commented on how it wasn't quite right for newborn rash and how it was like this other rash and that other rash but every single one was off by something and not quite like what he had (the pediatrician and one of the med students even brought out a book and spent a while questioning me about it and showing me pictures of various rashes that were all slightly different)...

Yesterday as I sat thinking about that rash I couldn't help but remember that the day before he was born we went to a local restaurant that has buckets of peanuts on the table and I ate a bunch of peanuts.  It's probably completely unrelated or impossible (can babies be allergic to things when they're still in the womb?) but it just strikes me as odd.

And that's pretty much where we stand right now...
Posted by Cammie Diane at 8:58 AM